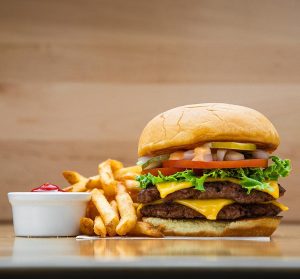 Having heard about some new extraordinary burger joint on Broad street that the staff at the Phoenix are all raving about, I decided to check it out for myself. I most certainly wasn’t disappointed and was most definitely pleasantly surprised. Rick’s Famous Juicy Burgers is apparently run by the same guy who owns Ocean Blue on Genny. I’ve never actually been to Ocean Blue but its reputation is well known, so it makes sense that this new burger place, being under the same guidance, would be successful as well.

So, my friend and I, a self-described connoisseur of junk food, went for an early dinner and what we found was the highlight of our month.

You walk in to see the self-ordering table directly across. It’s underneath a row of 1970’s posters and photos stretched along the wall. Your eyes follow that row all along the interior and you discover that the entire restaurant is 70’s themed. I myself didn’t quite grasp that until after I ordered and had sat down. That’s the genius of the place; its subtlety. Most “themed” restaurants really force the style way too much, and yet Rick’s isn’t forced. It’s not gimmicky like those 50’s themed Soda Shops. It’s authentically 1970’s (or at least it is to someone who has never actually lived in the 70’s). All along the wall are these vintage beer cans. You see the classic photo of Johnny Cash giving the cameraman the bird, Jane Fonda’s famous mugshot where she has her fist raised in solidarity with Black Power, and of course… Farrah Fawcett.

As for as the act of ordering itself, I wish I had stuck with the more traditional means of just going up to the staff rather than attempting to navigate their self-order menu, which I found to be particularly confusing. There’s some means of assigning a letter to your individual order so that if multiple people are on the same check than you can separate them by A, B, C, etc. At least I think that’s how it works. But in the age of Covid, I get the desire to have less person-to-person interaction, and the system isn’t really all that hard to figure out.

The prices are comparable to that of any local burger joint. Your standard meal of burger, fries, and a drink cost around $12 depending on the specifics.

Now onto the food’s quality.

It’s fast food to be sure, but it’s really really good fast food. It only took a little over 5 minutes from the moment of order completion to the meal’s arrival. I myself tried the double cheeseburger with bacon, cheese fries, chicken sandwich, onion rings, chocolate milkshake, and a partridge and a pear tree.

You know you’ve discovered something special when the first thing your friend says as they bite into their onion rings is, “Holy s**t, that’s good”. Uniquely, Rick’s uses red onions and the zest of the flavor wasn’t lost upon me either. A fine starter to my meal.

First, I started with the cheese fries, and what heaven they were. The cheese is genuine real cheese rather than the plastic-like stuff they serve at most places that do cheese fries. It tasted like Fried Mac & Cheese. The burger was almost as good, though that’s no insult as few things can compete with those fries. The burger’s bacon was my favorite part. While most bacon you get is reminiscent of a burnt credit card in texture and taste, this was like what you get from a deli.

The Chicken sandwich wasn’t all that impressive in flavor as its pickles overpowered the chicken itself, but the texture was perfect as was the breading.

As I write this, I’m still drinking the rich chocolate milkshake that I ordered, it’s bits of chocolate a delightful bonus. It’s not Stewart’s level, but none are.

Milkshake rankings aside, there’s little doubt in my mind that this place is a great addition to the Utica food scene, and I plan on making myself something of regular.

So, if you’ve made it this far in the article, then you’re probably asking yourself, “Is it really that good?”, to which I will answer, “Oh, hell yes.”