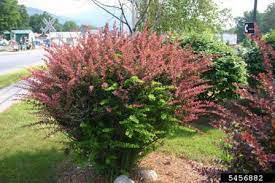 If you live in the country around here, either you or someone you know has been bitten by a tick, the bad tick, the tiny red and black deer tick. Lymes Disease is the most famous of the many diseases ticks carry, and it is devastating if not treated immediately and appropriately.

It was brought to this country in 1875. It is a much sought after go-to plant for ornamental landscaping. It wasn’t considered a problem until the 1980’s when it was found to have overrun native species of shrubs in 2nd growth forests.

Japanese barberry is very hardy, requires little maintenance, accepts shade as well as sunny sites and has escaped cultivation. According to Dr. Worthley of the University of Connecticut’s findings, there is a direct correlation between the number of Japanese Barberry in and area to the number of ticks present.

Where Barberry is not contained or grows uncontrolled you will find 120 ticks carrying the Lyme spirochete (Borrelia burgdorferi) per acre. Where it is contained only 10 infected ticks will be found.

Japanese Barberry can now be found in 31 states. From Connecticut to Maine extensive research is ongoing as they are two of 17 states where it adapted to local conditions that it is now considered invasive.

The bush is very showy with its deep red foliage and bright red berries which is why landscapers appreciate it for accent. But birds love to eat the berries and in their droppings spread the undigested seeds far and wide from the original source of the meal.

Another quality of this plant is its sharp thorns. The thorns are such that deer do not eat it, nor do other herbivores, but the foliage is thick and dense and harbors not only ticks but rats and mice as well.

Deer are the prime host of the adult tick, however, rodents love the Barberry habitat as well as ticks. Few predators can penetrate the thorny undergrowth of the Barberry and mice and rats distribute the tiny nymph stage ticks over a wide area, including your cat, your dog or other wild animals that might come into contact with their habitat.

You know the Barberry when you see it and it is everywhere. It is a dense, woody reddish shrub with numerous arching spine-bearing branches. The corner point of the Tramontane parking lot once harbored a tall, dense cluster which has since been removed. JK Hage’s landscapers chose it as a colorful backdrop for his plantings at South and Genesee. Trouble is, it doesn’t stay put and is difficult to get rid of.

The Barberry is already banned in New York, Maine, and Minnesota. Pennsylvania and West Virginia are considering the same.

Digging out the shrub is advised as cutting it out does not account for the root runners that the plant produces. Burning the plant with a propane torch is advised by the Connecticut experts. Chemical herbicides should be used as a last resort.

In short, landscapers and homeowners should all be aware that the rise in Lymes disease is more than likely due in part to the proliferation of the Japanese Barberry. The plant should be eliminated from ornamental use and eradicated from current outcroppings as it will continue its invasive pattern of growth and the harboring of adult ticks and the mice and rats that carry the nymph stage.

Colorful options to the Barberry are the oak leaf hydrangea, red chokeberry, or winterberry, all superior to the continued spreading of ideal habitat for the 2nd vector of Lymes Disease.