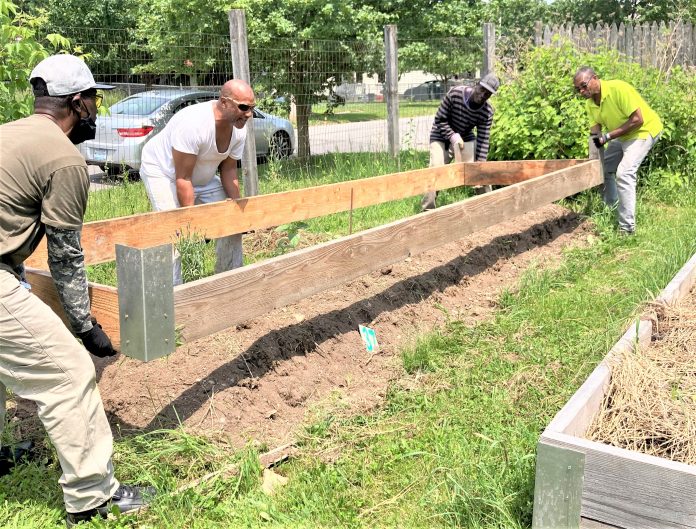 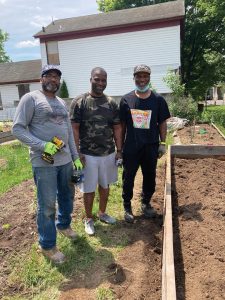 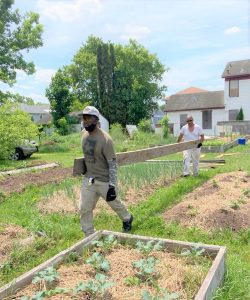 The front-page photo was taken in 90* heat in early June on a Sunday afternoon in the Linwood Place Community Garden. Garden member and neighbor John Mercer, Garden Leader Ian Muhammad, Board Member David Mentus, and new Garden member Orlando Rahman are seen hefting a garden box atop a mound of dirt. It will replace deteriorated wooden frame box that was constructed in 2008. Above, Anthony Morrison, Gustavo, and a neighbor break from work.

The men are volunteers and the lumber to replace the beds were donated by the Brothers at Hamilton, a college club of Black male students in 2020.

The original 2008 garden was funded by the generous donation of Attorney Richard Pertz. The Gardens were established, yes there are two of them, by For The Good, Inc. which have provided free organic produce for hundreds, probably thousands of food-insecure Uticans since its inception.

FTG is a Black female-led CBO, or community-based organization. It is a 501C3 in NYS and has been in continuous operation since 2002.

FTG also runs the Study Buddy Club a tutoring and mentoring program in conjunction with Hamilton College and has done so continuously since 2002. Over those years hundreds of local at-risk teens have changed their educational outcomes for the better through the SBC.

Both of these community assets, developed by Black leadership, deserve ongoing support to sustain their positive impacts but, neither the Community Foundation nor the United Way provides funding for the operation of the Community Gardens or the SBC though, over the years, numerous applications for funding or grant proposals have been submitted.
This is an example of racial bias in the enormous American philanthropic industry which has an annual intake of over $600 billion in donations. Both of these philanthropies stand as the hometown version of the White male patriarchal hegemony as they are the repository of untold charitable gifts, donations, and estates of America’s wealthiest citizens.

Another major occurrence in 2008, other than the economic crash and the Great Recession, was the collapse of the Cosmopolitan Center, the beloved Black CBO begun by Bessie Hicks in the mid-1930s, with an extended leadership with the late great James Blackshear in its heyday, ending with a lack of effective leadership. The Cosmo was a longtime United Way Agency until it withdrew funding and ending the Cosmo’s unique service to Utica’s Black community.

The tragic collapse of Utica Community Action in 2002 heralded the disappearance of nearly every other nfp providing programs and services to Youth in our city. Including the YMCA, the YWCA, the Knights of Columbus, the Boys and Girls Club, and of course, the Cosmopolitan Center.

Sadly, Community Action alone brought in more than $10 million annually to the local economy and created hundreds of jobs.Since then, neither The United Way nor the Community Foundation has determined to support, sustain maintain or develop any Black-led agency to replace this missing element of infrastructure in Utica not-for-profit landscape. A Black-led organization designed to meet the needs of the marginalized urban community with a special focus on youth programs and self–development for those living in poverty is sorely needed.

This is how racism works at the systemic level in philanthropy.

Especially considering that the Community Foundation has, as of last year established a $10 million Racial Justice and Equity Fund. To this date, the Community Foundation continues to solicit funds from the public for this fund while it has failed to approve requests from or distribute any of the millions it has raised to the many marginalized programs or organizations in the Black community.

Some five years ago the Community Foundation black-balled and black-listed For The Good, Inc. because its CEO, this writer, dared to speak truth to power in finally coming to the conclusion that and criticizing Community Foundation’s unspoken policy of not funding Blacks’ requests. These are the consequences.

Criticizing the Community Foundation’s practices has never been a public acknowledgment of the Black community, however much it was complained about in private. At the risk of being punished for such a statement, or Black-balled for calling them out, local Blacks have for decades shared in private, “The Community Foundation don’t fund no programs for Black folks.”

I didn’t believe them. So, for years this writer submitted numerous proposals to the Community Foundation on many, many different projects and levels of funding. All but one, for building garden sheds in our two community gardens was denied. Some never even received the courtesy of a response. There was never a follow-up course of action recommended to achieve approval.

This racist policy really became clear when the CF rejected a joint proposal for funding combining the work of the Junior Frontiers and The SBC to operate out of and also include Refugee Center youth. When they turned us down I knew then that the Community Foundation had no intention of supporting or maintaining success in the Black community.
One of the criticisms that the Community Foundation had always leveled at the Black community was, “You people don’t know how to work together. You never collaborate.”
Well, this time cooperation was served up on a silver platter. They still turned it down.
I also realized that there was no oversight with all of those billions of dollars in assets, other than the philanthropy’s own morality and rules. And their rules are written to favor White men. Plenty of white women are in there too but they play by the rules of the rulers. The White men, the White male patriarchal hegemony.

In this social construct, as a Black woman, I am at the bottom of the ladder. But, this writer is not the Negro who sits quietly in the corner asking permission to approach the table for the crumbs of those being served. Over the years I have published numerous articles complaining vigorously on the lack of support for the Black community.

I have watched year after year, Black individuals and groups invited to the Community Foundation palace on upper Genesee Street. They are brought together, chided and grilled, tempted with promises of support and funding that never come.

The Community Foundation is the repository of millions of dollars in donor-directed funds. Among these funds are the Camp Healthmore funds which once provided an annual project of the Cosmopolitan Center. Hundreds of inner-city kids learned to swim, have fun outdoors in the country, make boondoggles and other arts and crafts every summer. There are other accounts that donors have left for ‘the Black cause’ which have ceased to be directed to any Black agency.

And since 2008 the United Way has not deemed it a priority to assist the Black community to restore or replace the level of funding it once dedicated to the Black community.
This is a problem. Here we are in 2021. Next year For The Good, Inc. will be 20 years old. FTG was founded to replace the work of Utica Community Action, a federally funded anti-poverty agency. Our intention has always been to provide community development programs ‘to assist those in poverty to overcome their poverty by their own means.’ That funding never materialized.

For The Good has done the best we could do without the help of these local philanthropies that put darling little black faces on their annual reports but never fund Black agencies to deliver programs and services to their own people. Self-determination and community empowerment are not on the list of deliverables for the United Way or the Community Foundation. They should be.