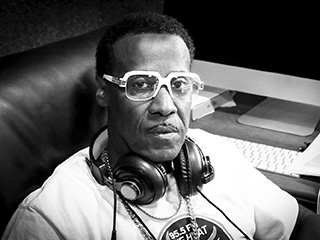 The Life and Times of Musician Mercedies Azis Harris 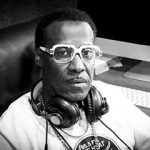 Mercedies Aziz Harris was born in Brooklyn, New York in 1960. He keyed into music at the age of eight or nine when Motown was really going strong. At that time his mother and her friends would have parties every weekend or so at each other’s houses. By the mid to late ‘70s the city parks were exploding with music as boom boxes were at their height. Deejay’s would cut and scratch. Emcees would tell their stories and rhyming would bring in the new area of hip-hop culture.

As a young teen Mercedies began to put order to what was going down in the Hood. He started hanging around the stages of shows in the parks, meeting and greeting the entertainers. Today it’s called networking. In 1977 he was practiced enough at spinning records himself that he landed a job at Club Chante and the rest is history.

Mercedies would help carry crates and wiring for the Dance Masters Disco that brought the music to the people on a regular basis. His was a critical part of this burgeoning urban music delivery system which was refined with many smoothly working parts. There were the crate carriers with the albums and wires, the ‘engineer’ hooking into the power grid, the runners selecting the albums and the deejays spinning the tunes. He watched and he learned and eventually grew to perform all of the jobs.

He was inspired by listening to those emcees and in particular, there was a smooth female voice that rang out in his mind. He credits Ms. Baby Love of WBLS 107.5 FM with affirming in his mind what he was going to be. He became friends with Ms. Love’s late brother and what he calls his ‘hood brother’ the one and only “Chango” Chain Gang Everett.

Everett was a dynamic drummer who became a major artist, with the hit record “Workin Up A Sweat.” They became partners in an entertainment business.

Harris started learning to rap and spin, scratch and blend. ‘Kool-Aid’ mixing, was “mixing two records to make another.” These styles were developed then and are still used today. Today Harris reminisces, “I didn’t create it, but someone did. I think Scooter Love of the Dance Master’s Disco did.”

Entertainment had become a big part of the young man’s life.

In the early ‘80s Mercedies landed an intern position for the block buster NYC station WBLS 107.5 FM. He would get on the mic to practice mixing techniques at his friend Stinky’s house who is now married to Sparky D.

By 1982 Harris was getting some play to develop his skills by well-known DJ out of Brooklyn named DJ Dr. Tanqueray. Harris says of that opportunity, “I went off to the races and never looked back. I brought a small after hours club in Brooklyn and called it Club Uniques, where  he was emcee and DJ.”

A short lived venture, he recognized his need for more business skills; he attended the Columbia School of Broadcasting in Arlington, VA .There he learned most of the skills needed to be successful in the entertainment business, on air broadcasting for radio and television, news, sports, and weather packaging along with commercial voicing.

Two years later he was the DJ at a night club in Falls Church Virginia called Chef’s Choice.

In 1985 and as a Marine, Harris had started working on military bases emceeing with his brother. They called themselves Double Trouble. They played Cameron Station, fort Meade, Fort Belvoir, Andrews Air force Base, Bowling Air force base, and others.

After getting married, Harris took some time off, but his love for the business overwhelmed him.

“I had to get back in so I got in touch with a couple of alma mater of WKYS KISS FM, Charmaine Foster, Donnie Simson, Brut Bailey and the Gentle Giant Bob Thomas.

“In 2005, I started my own entertainment business called Mercedies Entertainment and Productions which today is known as “M.E.A.N.T LLC. in Waynesboro, VA.

“I saw a chance when a venue was closing down around the holidays and there was nothing going on. I approached the owner of a club called café Caribe and asked if I could bring people back could I lease this place. He agreed and the rest was history.”

In 2009, Harris started at Star94 FM working as a voicer for commercials and moved into productions from 2010-2012. He became a radio personality and started announcing on 1240 Wton ESPN. Harris also started a Gospel show called “Let the Truth be Told Sunday mornings from 6-7. This show reached a 150 mile radius between natural bridge, VA to Winchester, Virginia, which then birthed the annual “Lookout 4 the Cookout”

Harris spent the next several years producing music and shows for several artists. In 2010, he worked with ‘Stop the Violence featuring Sparky D.