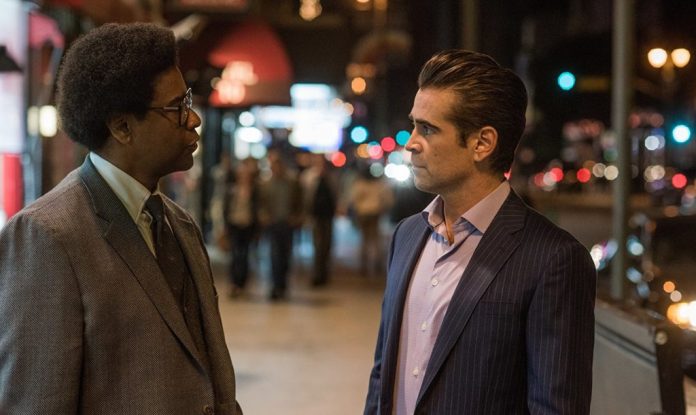 Dan Gilroy, the director who brought us the powerful “Nightcrawler” in 2014, releases another introspective drama here with “Roman J. Israel, Esq.” The film, which opens with a lawyer narrating why he wishes to disbar himself from the California Bar Association “and the human race” for egregious transgressions almost immediately begs our interest. It’s helped that this man is played by Denzel Washington in a performance so total he’s already been nominated for an Oscar for it. However, the film’s powerful first act is muddled by its second and third. There’s a story here; but Gilroy puts too much stock in his lead to leave time to dig for its deeper treasure.

“Roman J. Israel, Esq.” isn’t defined by plot, but here’s a quick description: Israel works as a lawyer. He’s the background man in a two-person firm. The other man is William Jackson, who works the front lines: the trials, the litigation, etc., but he we never see. He suffers a heart attack off-screen at the film’s opening and is written off. Israel must go to court to get continuances – which of course he can’t do as he cares too much about the social justice issues his clients face. It makes him both a terrific human being and a terrible attorney.

The firm’s assistant decides to hire a friend of Jackson’s named George Pierce (Colin Farrell) to sell off the firm. Pierce is the senior partner of a successful practice downtown; when Israel is unable to find work elsewhere, Pierce takes him on – both as a favor to Jackson and for another reason: Israel has an encyclopedic knowledge of law and Pierce thinks he can use him for ‘billable hours.’

This film is driven by Washington, who delivers a performance that is awe inspiring. I won’t say this is Denzel’s “best” performance. He’s played so many powerful roles – Pvt. Trip in “Glory” and Alonzo in “Training Day” (both of which earned him Oscars), that a statement like that is just a sound byte. It’s an amazing performance, and truly a character we’ve never seen before. Israel is a mixed bag: he’s unkempt, with a bushy afro and ‘70s-era suit, a pair of sponge-covered, ‘80s headphones his only jewelry. They’re attached to an iPod that holds a plethora of jazz classics. He lives in a run-down apartment. He doesn’t drive. He’s a simple, unambitious but driven man.

Roman is likely autistic; his social skills a grade below awful, he’s built on routines and values. He’s quixotic, with an unwavering sense of justice. He fights for the big things – which are little to everyone else: a homeless man’s dignity, low-level offenders being coerced into guilty pleas, civil rights. He throws around the ‘Esq.’ at the end of his name as a tribute to a time where that meant something. It’s a representation of his honor, his values, his code. All of this is nuanced wonderfully by Denzel – you never once see notes of Washington in his portrayal. There is only Roman.

The film’s ‘crisis’ occurs when Roman flirts with a course of action during a murder trial that goes against the values he’s lived his entire life. It comes to a head in a scene in an interrogation room that starts with Roman in control and ends with him fleeing the scene in anxious, shameful panic. Washington’s greatest ability lies in his restraint; it’s through him we believe Roman is a man literally bested by this transgression. It’s not the act’s discovery he’s running from but his own guilt.

The film’s speckled with supporting performances. There’s Maya (Carmen Ejogo) a civil rights advocate who takes a liking to Israel. She’s a good buffer to Roman. Maya is integral, smart, idealistic – everything Roman stood for. In a fit of irony, she appears in his life only after Roman’s sellout, when he no longer feels he deserves her.

As George Pierce, Colin Farrell surprised me. He basically plays a straight-edged lawyer with a small arc. But he pulls it off. He looks older, wiser, and more in control than previous efforts. Pierce also plays off Roman well – the former, a corporate man driven by money who becomes pious by the end, and the latter, who starts out pious but is unrecognizable to himself by film’s conclusion. This is the film’s greatest achievement: “Roman J. Israel Esq.” is not about evil, but about a man who is unable to live with his own guilt. What he’s done is small compared to the criminals he represents. But to him it’s everything.

However, the basic problem with the film is that Gilroy spends so much time structuring his production around Washington’s performance, there’s little to no story to back it up. The film isn’t about what he does, but that he does it. And while Jake Gyllenhaal’s performance in “Nightcrawler” was enough to carry that film, and for it to be about that, it just doesn’t work with this film. “Roman J. Israel, Esq.” flirts with making a difference, selling out, etc., but doesn’t pack enough punch to make a statement. Its end scene tries to vindicate this; but by this point has clambered around too much to make us really care about its effect. Gilroy paints Roman’s actions as too final – they’re not presented as something the character can recover from, and this robs the film of the ending it deserved.

At the end of the day, this is a movie with a lot of potential that fails to deliver. Washington astounds, and rightly deserves the Oscar nod, but the film itself is uninspired. It outlines a number of occurrences that begin and end, but are never really felt. Gilroy has produced successful and fulfilling character studies before. Unfortunately, “Roman J. Israel, Esq.” will likely not be remembered as one of them.