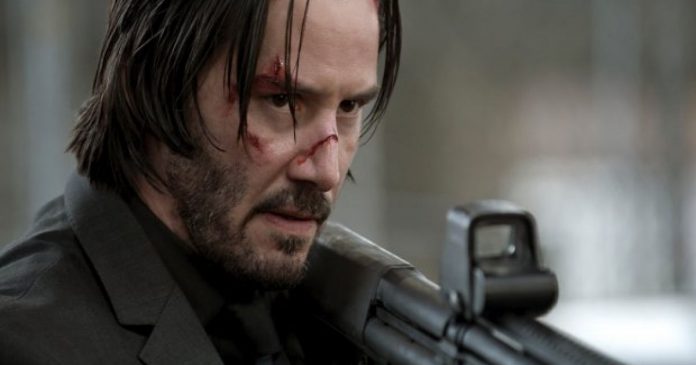 “John Wick: Chapter 3” is violent as hell. Sure, it’s antecedent, para bellum, derived from the Latin for “prepare for war,” should have you believe nothing less. It’s also a cinematographer’s and action lover’s dream, with cinematic and fight sequences that rival some of the best martial arts films out there. “John Wick” realized rather acutely that up-close-and-personal gun violence mixed with martial arts would be its modus operandi, and “Parabellum” delivers by extending this brand of cinematic muay thai to include swords, books, knives, horses (yes, horses), and everything but the kitchen sink to bring a one-of-a-kind actioner that hits on all the right levels. Like “John Wick” the film runs somewhat long at two hours and 11 minutes, but succeeds due to its unique style and violence cranked up to the nth degree.

You can tell Keanu Reeves, the film’s main star, really enjoys playing this character, and it shows. He’s a man cloaked in mystery, part ‘Neo’ and part assassin who is all but unstoppable. Early in “Parabellum” it becomes known that Wick killed the wrong man in the wrong way, and is hunted by the “High Table,” which declared open season on the super assassin. He narrowly escapes death in the film’s opening by engaging in hand to hand (and gun to gun) combat in such milieus such as the New York City Public Library, rainy streets, horse stables, crowded venues, and antique museums – in the process finding unique ways for Wick to kill his quarry. Spoilers in a film like this are hard to avoid but should still be avoided. But suffice to say I’ve never seen swords and knives used quite like this, and John Wick even finds a way to kill a man with a horse in a way never seen before in cinema.

Stylistically “Parabellum” is a marvel, and features such location hopping as New York City to Casablanca to barren deserts. In New York, we see a rainy night that never ends, part “Sin City,” part “The Crow,” with the city turning into a den of thieves and murderers where regular people cease to exist. Wick, with his trademark black suit and tie, long hair dripping wet silhouette the proceedings as wave after wave of assassins come at him.

“Parabellum” also borrows notes stylistically from films such as “Eyes Wide Shut,” “Only God Forgives,” and some of the Daniel Craig Bond films with both its lighting choice and venues, and the film is all the better for it. Certainly some of the more interesting shots involve Wick fighting amidst a transparent glass mega staircase in the film’s keystone hotel ‘The Continental,’ holographic lights watching over the proceedings, as well as another in Casablanca that takes place amidst darkened corridors and pots of melting, glowing metal. This latter sequence features Reeves fighting alongside “X-Men” favorite Halle Berry, who is quite effective and a fun action heroine in her own right.

Reeves backed by solid talent such as Laurence Fishburne, Ian McShane, Mark Dacascos, Asia Kate Dillon, and Lance Reddick. Some villains, some allies, Wick’s interactions with them and the aforementioned Berry propel the film along during its few lows when Wick or another is not hammering swords, knives, or some other implement into their hapless victims.

Asia Kate Dillon, as ‘The Adjudicator’ in particular shines, as does Anjelica Huston as ‘The Director’ in a scene that gives us a little more insight into John Wick as a character than two previous films. “Parabellum” even gives us a scene where Wick contemplates how he wants to be remembered; as The Boogeyman, or as one with his soul intact.

As stated, “John Wick: Chapter 3 – Parabellum” runs a little long; and, while crammed with violence and action, begins to get a little nerve wracking at times. While the  action is crowd pleasing and plentiful, a little more exposition would have gone a long way, but that’s not the kind of film this is. Further, “Parabellum” suffers from some of the same complaints that made “Hostel” a decent horror film but “Hostel 2” completely unwatchable – we simply see too much of the behind-the-scenes machinations of the High Table and at times it feels like “Parabellum” is trying to explain too much. Wick upset a bunch of powerful people and they want him dead. Not much more is needed to enjoy “Parabellum,” but the film seems intent on letting us know the complete inner workings of the machine that wants Wick dead, taking some of the suspense away in the process.

But, at the end of the day, “Parabellum” is a fitting entry into the John Wick universe. It features action sequence after action sequence, hard hitting special effects and stellar sound design, and is an effective set up for a “John Wick 4” sequel in the not too distant future. It had an opening weekend that rivaled “Avengers: Endgame” and entertains while leaving you wanting more. It will be hard for the film’s creators to come up with more interesting death matches for them to place their anti hero, but I’m sure they have a few more tricks up their sleeves.