LOS ANGELES — After apologizing for slurring some words and before expressing a desire to “run it back,” Aaron Donald — muscle-bound menace, destroyer of worlds, perhaps the fiercest football player who ever lived — embodied the enthusiasm of a small child.

“Look at this trophy right here,” the All-Pro defensive tackle said, his smile widening as he cupped his right hand around the Vince Lombardi Trophy. “Look at it! This for you guys!”

A little more than 50 yards away, within a massive lawn residing in front of the peristyle entrance to the Los Angeles Memorial Coliseum, thousands of Los Angeles Rams fans gathered to celebrate a Super Bowl championship won on their home turf Sunday. There were Donald, Jalen Ramsey and Eric Dickerson jerseys. There were blue wigs, bejeweled horns and, most notably, not a trace of red or orange.

Since returning here in 2016, the narrative surrounding these Rams has seemingly focused on all the things they are not — not the Lakers or Dodgers, not the predominant football team of Los Angeles, not, on some Sundays, the biggest attraction to their own stadium.

On a bright, sunny Wednesday morning-turned-afternoon, during a 1.1-mile parade route that winded down Figueroa Street and ended at one of the planet’s most historic sports venues, the Rams finally had their own moment. The team that hosted the NFC Championship Game and the Super Bowl with hordes of fans from the opposing team was surrounded only by its own people. The organization that has spent these past six years feverishly working to make its own imprint in L.A. finally had the town all to itself. 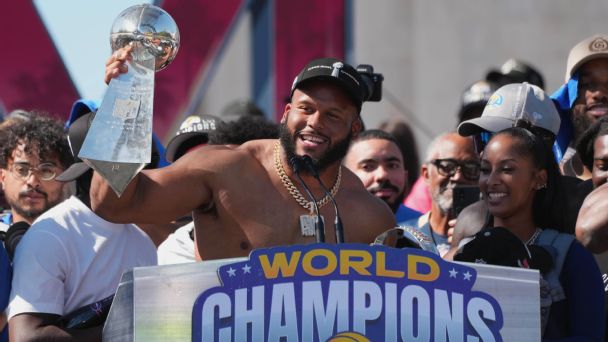 “It’s overwhelming, really, how much a sports team can impact a city of people,” Rams general manager Les Snead said.

It hit Snead when he scrolled through the replies on his wife’s Twitter account after she asked fans to submit videos of themselves celebrating the Rams’ Super Bowl championship, their first in L.A. It hit him again as he rode atop one of the four double-decker buses that made its way around the USC campus. Suddenly a city of four million people felt small, not unlike the place he grew up in.

“L.A. is nothing like a small town in Alabama,” Snead said. “But when you drive through the neighborhoods, it just feels like there’s a lot of small towns. It doesn’t matter where you go, which block you’re going — you can feel that that block is alive. And it’s their block and it’s their small town. It’s just a million small towns.”

Snead proudly wore a T-shirt depicting the popular meme built around him that reads “f— them picks,” an image also emblazoned on one of his coffee mugs. The boldness behind that mantra has come to define the Rams’ trajectory — from trading up to draft quarterback Jared Goff to hiring a 30-year-old head coach in Sean McVay to acquiring quarterback Matthew Stafford to taking chances on volatile personalities such as Ramsey and receiver Odell Beckham Jr.

The Rams uncovered one of the brightest young minds in the NFL and built a star-laden roster amid the backdrop of an opulent new stadium and splashy uniforms, making all the moves, spending all the money and absorbing all the risks necessary to make an imprint in Los Angeles. And oftentimes, even near the end, it somehow didn’t feel like enough. The days leading up to their parade were filled with talk about the Dodgers and Lakers potentially joining in — a circumstance that would’ve engulfed the Rams once again.

Maybe it’s time to judge this team by its own merit.

Maybe the Rams have earned that right.

McVay cursed, Stafford slurred, Donald flexed, and the crowd around them progressively swelled.

The main cheering section was half-empty about a half-hour before the start of the parade, but it had filled up impressively by the time the Rams’ buses rolled through.

The surrounding streets weren’t flooded, but more people began to follow as the celebration endured. It wasn’t an overwhelming crowd, but it wasn’t an embarrassing one.

There will be other parades like these, the Rams hope. And if so, those crowds will only grow.

Facebook
Twitter
Previous article
MMA divisional rankings – As toast of the heavyweights, how much success can Tai Tuivasa drink in?
Next article
Kylian Mbappé continues to bend Champions League to his will