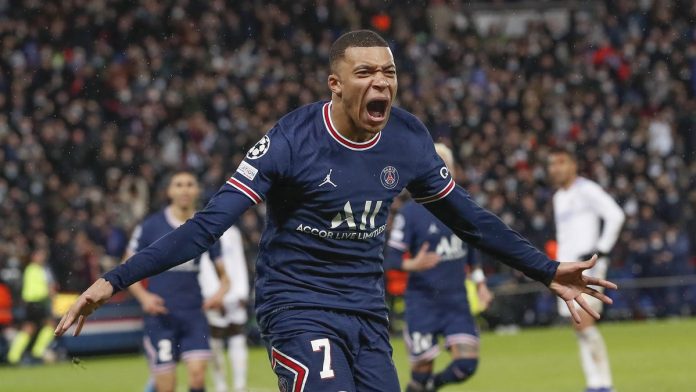 Kylian Mbappé is only 23, but his plunge into the world soccer scene keeps growing. The French dynamo, playing for his home country’s most successful club over the last dozen years, Paris Saint-Germain, as well as being an integral member of France’s national team, keeps scoring critical goals. Two in the last week have been stoppage-time winners for PSG.

In Ligue 1 play, a 93rd-minute right-footed curler found the back of the net against Rennes to give the Parisians the 1-0 win. It was déja vu on Tuesday, with PSG beginning knockout-round play of the UEFA Champions League at home against European titans Real Madrid. You could sense a repeat coming. PSG’s No. 7 was the best player at Le Parc des Princes, creating more chances than anyone else, confusing Madrid’s defense with his pace. His work seemed to have come to fruition in the 61st minute, drawing a penalty, being taken down in the box by Dani Carvajal.

PSG teammate Lionel Messi, which feels like an odd qualifier for one of the world’s best players, stepped up to take the penalty kick, slotting it with his left foot to his right, but not far enough away from Real Madrid goalkeeper Thibaut Courtois, who made the save. Still, Mbappé pressed on, with signs of frustration coming in the 93rd minute when teammate Idrissa Gueye decided to take a shot from outside the box, easily saved by Courtois, instead of passing to him.

The teams seemed destined to head to the Bernabéu, where Madrid plays, for the second leg of their Round of 16 matchup tied 0-0 on aggregate. Until Mbappé worked his magic again. In what he knew would be PSG’s final chance to score in the match, the Frenchman dribbled through both Éder Militão and Lucas Vázquez to get in prime position for a chance on goal. Mbappé relied on his favored right foot and slotted the ball under a sprawling Courtois and into the back of the net for the 94th-minute game-winner, leaving the commentators to debate whether he’s the best footballer on the planet.

Mbappé deserves a ton of credit for carving out a role for years on one of the most stacked teams in club football, doubling that with his role for the French national team. Moments like Tuesday’s Champions League magic should continue to happen as it might not be a debate much longer as to whether No. 7 is the best at his craft in the world. The question may shift to: Who is the best after him?

PSG has no shortage of top-quality players who could play in Mbappé’s position. At least Messi, Neymar, Mauro Icardi and Angel Di Maria could fill in for him. That’s a group with a Ballon d’Or winner, an Olympic Gold Medalist, and tons of other distinctions most teams would drool over. But not PSG, and Mbappé’s spot is beyond locked in.

PSG is in a unique position in European club football. It won seven of the last nine Ligue 1 titles and it’s well on its way to making that eight of 10, as Mbappé and crew haven’t lost a league game since October, the last time Rennes was its opponent. There are other clubs around the world that’ve had domestic domination, but have had more heavy hitters getting in their way of a title such as Bayern Munich and Juventus in recent years.

Mbappé’s rise and PSG’s quest for a European title are one in the same. It goes beyond saying he’s the squad’s most important player at the moment. He’s a massive asset for the future. A run with Mbappé guarantees big moments, like Tuesday’s against 13-time UEFA Champions League winners Real Madrid, can keep happening. Advancing to the UCL quarterfinals is far from guaranteed, but the prospects for PSG look a ton stronger with Mbappe and that one-goal advantage. Bigger clubs may always be trying to lure Mbappé away to a more-proven European winner, like when Madrid tried to sign him away from Monaco in 2017, but Mbappé opted to head to Paris instead.

With a World Cup coming later this year, Mbappé’s profile has plenty of chances to rise before birthday No. 24. France is already guaranteed a place in Qatar, by winning the 2018 FIFA World Cup, with Mbappé being one of the biggest stars of the tournament, scoring four goals in Russia. Messi turns 35 in June and Cristiano Ronaldo is 37. The mantle for the next big thing in soccer will be up for grabs soon if it isn’t already. That conversation isn’t complete without Mbappé.