Images show sea of stolen packages and debris after thieves 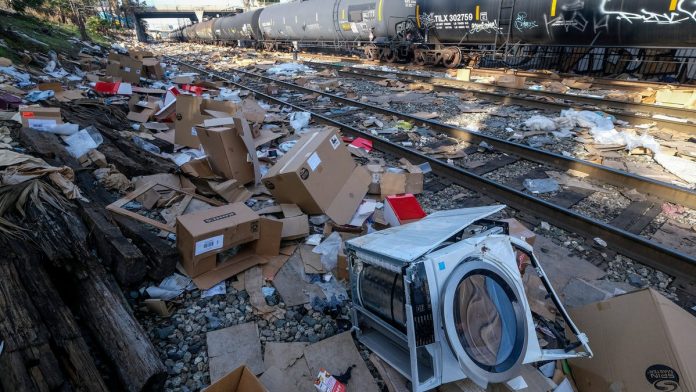 Dozens of packages were stolen out of cargo containers in downtown Los Angeles, leaving the train track cluttered with shredded boxed, UPS packages and debris.

In a video taken from CBSLA freelancer John Schreiber, the train tracks are covered under a sea of trash, epi pens, COVID-19 tests and more. The scene was not a one-time event, thieves have been raiding cargo containers in the area for months.

While CBSLA cameras were on the scene, one person was spotted running off with a container used to hold small packages, and a Union Pacific railroad police officer was spotted pursuing two other people who were apparently going through packages.

Keep hearing of train burglaries in LA on the scanner so went to #LincolnHeights to see it all. And… there’s looted packages as far as the eye can see. Amazon packages, @UPS boxes, unused Covid tests, fishing lures, epi pens. Cargo containers left busted open on trains. @CBSLA pic.twitter.com/JvNF4UVy2K

A similar scene occurred in November, when NBC4’s cameras caught thousands of boxes discarded along the tracks lined with homeless encampments northeast of downtown in the Lincoln Park area.

Union Pacific said in a statement to CBSLA that the company is concerned about the theft and taking measures to prevent it.

“We have increased the number of Union Pacific special agents on patrol, and we have utilized and explored additional technologies to help us combat this criminal activity. We also will continue to work with our local law enforcement partners and elected leaders,” the railroad said.