How you could see cleaner air and water with Biden’s 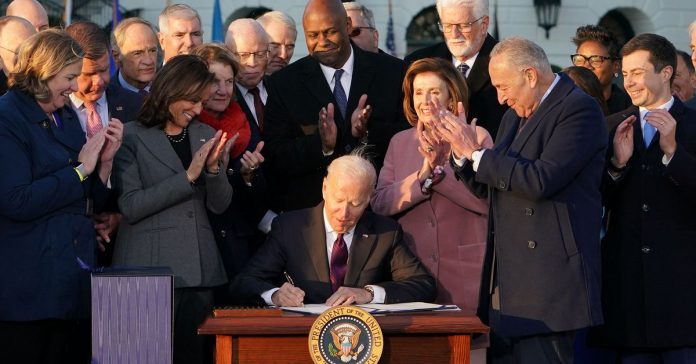 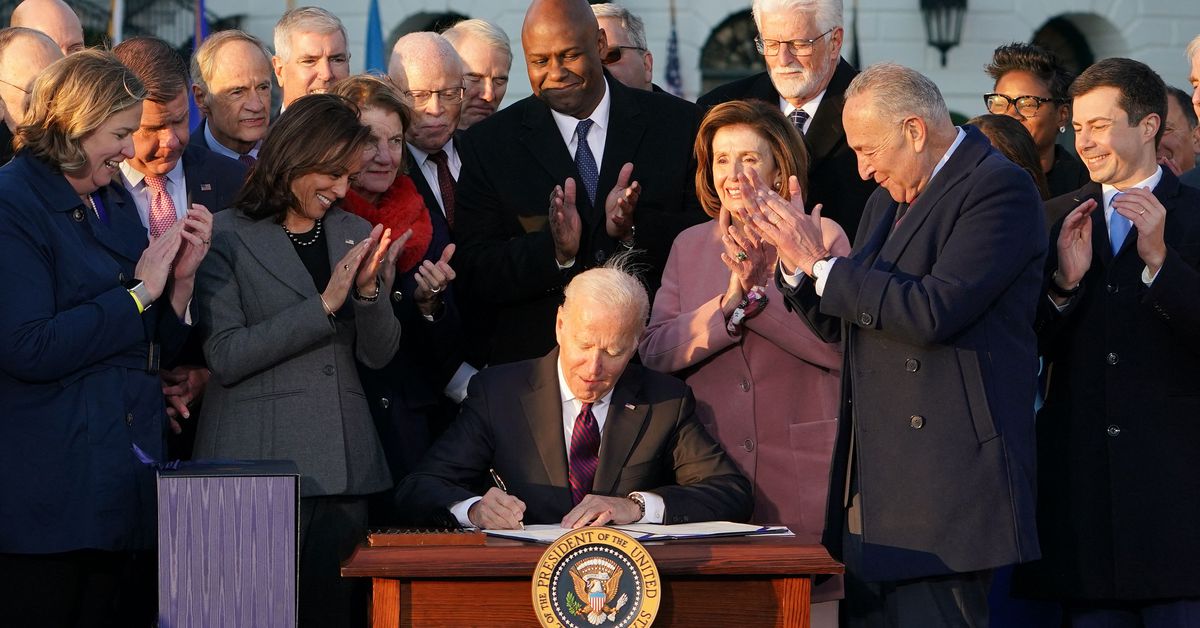 The funding could make a serious dent in air and water pollution for certain communities by preventing runoff from abandoned mines and cleaning up old, toxic manufacturing sites. People who live near busy roadways, airports, and ports may benefit from the boost to electric vehicle charging stations, school buses, and cranes that will replace gas- and diesel-burning cars and equipment.

Other investments will improve public health more indirectly: One of the law’s major provisions includes expanding transmission that can move more clean energy across the grid. By increasing the mix of renewables, states and the utilities they regulate ultimately would need to burn fewer fossil fuels to power the economy.

The biggest criticism of the new law is what it leaves out: Environmental advocates say the funding only meets a fraction of the nation’s needs for addressing water and air pollution, and falls far short of the transformative change Biden promised on the campaign trail.

This is also not the transformative climate bill that climate activists had hoped for. And some of the investments will worsen carbon emissions — the funding for highway construction, for example, could increase pollution in the short term because of the heavy machinery and manufacturing involved. Racial justice advocatestell Vox they are also concerned that the law amends their key tool, the National Environmental Policy Act, in ways that will make it harder to protest future fossil fuel pipelines, highways, and petrochemical sites.

Because of this mixed bag, an analysis by Princeton University finds that the new infrastructure law only reduces carbon emissions by 1 percent by 2030 compared to peak levels, an infinitesimal drop in the bucket compared to the cuts needed over the coming decade. The far more important investments for climate change remain in the Build Back Better reconciliation bill that still faces an uncertain fate in Congress.

But while the country waits and sees if Democrats will pass the larger climate investments of the Build Back Better Act, it’s worth looking at the serious ways the infrastructure law can improve environmental healthin certain communities. It’s a down payment that can help, explained American Lung Association’s senior vice president of advocacy Paul Billings. “Cleaning up pollution can help to reduce at least part of the burden that these communities are facing,” Billings said.

Here are the major ways the bill can make a difference.

Cleaner air next to some busy roads, rail routes, and ports

Ever been hit by a blast of exhaust from a tailpipe when a bus passes by? That is diesel, a carcinogen, according to the World Health Organization. It contains hazardous air pollutants like nitrogen oxides, particulate matter, and benzene,which all contribute to unhealthy air that more than 41 percent of Americans breathe in.

Heavy machinery and equipment — like big trucks, freight-carrying ferries, and cranes that keep the supply chain running smoothly — are among the most polluting parts of the transportation sector. People who live by highways, freight rail, and ports are the most exposed to higher levels of all kinds of toxic pollutants than the rest of the population because they’re so close to the source: the tailpipe.

The infrastructure law makes the biggest federal investment yet in electrifying the transportation sector. By adding more electric-powered machinery fueled by an increasingly clean electricity sector, communities near ports and highways would face less smog and particulate matter.

The $7.5 billion for electric vehicle chargers helps with one major obstacle to getting more electric cars on the road. Other investments modernize some public transit lines and add lower-emissions buses and rail to fleets. And $17 billion goes to curbing pollution near ports by electrifying more diesel-burning equipment like tug boats, cranes, and freight trucks.

Ninety-five percent of the nation’s school buses run on diesel. That leaves more than 20 million kids exposed to pollutants from bus exhaust every school day, whether they are riding them, standing next to an idling bus, or walking to school. Adults living in nearby communities aren’t immune to the lung and brain damage caused by diesel either.

The law devotes $2.5 billion to electrifying school buses, a sum that will only begin to transform the nation’s school fleets. Though experts don’t have an exact number for how many buses this sum would replace, it will be far less than the 20 percent Biden originally hoped to electrify with $20 billion. There’s even more money, $5 billion, in the still-unfinished Build Back Better bill to electrify trucks and school buses. 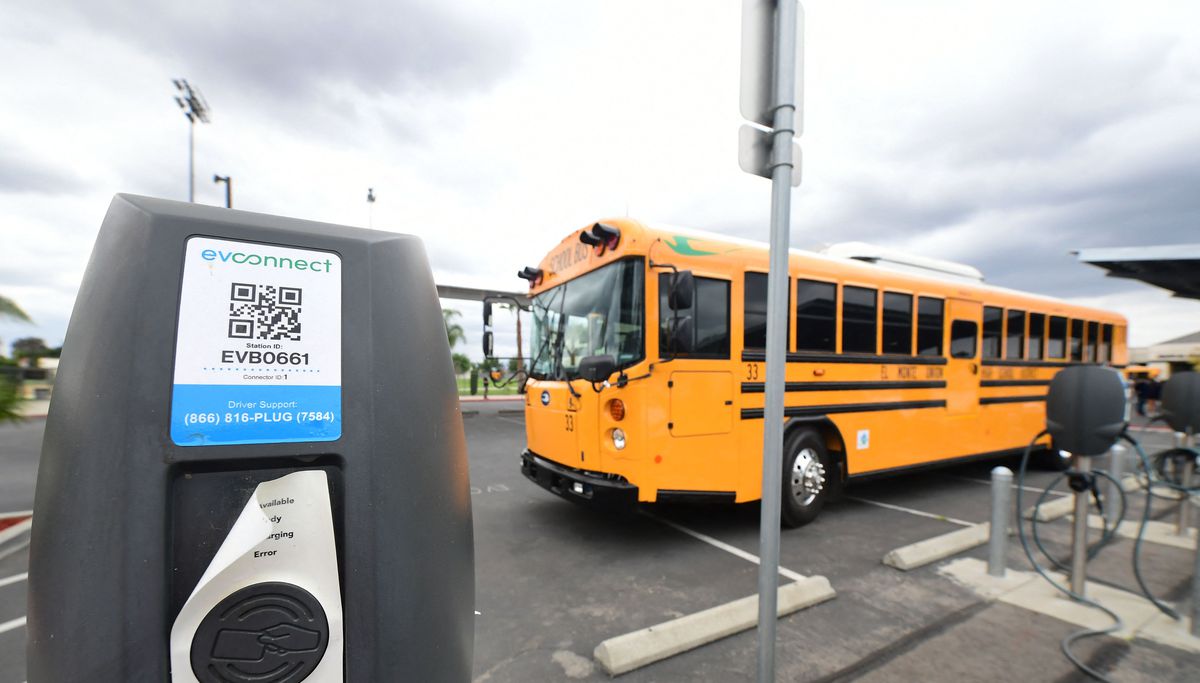 The United States needs to produce more clean energy, and find better ways to store solar and wind, to meet the nation’s energy demands while also meeting climate targets. It also needs more transmission lines to transport renewable power to businesses, homes, and all those charging stations powering those newly electrified cars and buses on the road. The infrastructure law devotes $65 billion to updating the electric grid, including building thousands of milesof new lines.

Since bringing more renewables onto the power grid is key to cutting demand for and dependence on coal, oil, and gas, this funding will indirectly help clean up the air. Less coal burned, for instance, means less residual toxic waste, less mercury and sulfur in the air, and less ozone.

There are three major ways the law cleans up drinking water: by addressing lead pipes, beginning to address PFAS contamination, and improving aging sewage systems that dump contaminants in waterways.

The law includes $15 billion for replacing lead pipes used for drinking water (the Build Back Better Act has another nearly $10 billion). Flint, Michigan’s, lead pollution crisis has made national news since 2014, and it’s far from the only majority-Black city that has had undrinkable water. “There’s a very long list of states and localities waiting for this funding,” said Sierra Club’s senior federal climate policy director Liz Perera.

The law also makes another $10 billion investment in cleaning up PFAS, a class of “forever chemicals” commonly found in drinking water. It increases the EPA’s funds for state grants to test for and treat PFAS that ends up in drinking water and to prevent PFAS runoff in wastewater.

Finally, the law spends $30 billion starting to revamp city sewage systems and wastewater management. Severe floods, worsened by climate change, keep overwhelming parts of the country with sewage systems not equipped to handle the deluge. For example, Louisiana officials in September dumped raw sewage into waterways during hurricanes to avoid inundating homes. This is one of the infrastructure law’s most significant investments in preparing communities for worsening climate change.

As my colleague Li Zhou reported, the effectiveness of these programs will come down to how the EPA distributes the funding to states for implementation.

There are so many abandoned mines and old oil and gas wells in the country that have been ignored for so long that there is only a rough guess of how many exist. The true number is probably somewhere more than 3 million for a century of widespread fossil fuel production.

At some of these sites, you can literally see the rusted pumpjacks and leaking tanks abandoned by now-defunct drillers. The more invisible menace is the emissions that escape from an uncapped well. These open sites leach the climate pollutant and smog-contributor methane, plus a host of other chemicals, into groundwater and the atmosphere. So $16 billion in the infrastructure bill is a major boost to the Abandoned Mine Land Program that has been running on just $8 billion in funding stretched over four decades.

Congress has similarly neglected the EPA’s trust fund that cleans up toxic former industrial and waste sites, and communities of color bear most of the burden of that neglect: As Brian Deese, the White House director of the National Economic Council, tweeted, 26 percent of Black Americans and 29 percent of Hispanic Americans live within three miles of a Superfund site. Biden inherited a list of 34 of these Superfund sites and a list of more than 1,000 backlogged projects.

Congress will inject $3.5 billion into the EPA’s bankrupt Superfund Clean-up fund and $1.5 billion into EPA’s brownfields clean-up via the new infrastructure law. More importantly, an expired tax on chemical manufacturers that Congress let lapse 25 years ago will be revived.

Ultimately, the infrastructure law’s true impact will fall to how it is implemented by the Biden administration and future administrations. Enforcement of environmental laws will matter in many cases as much as the law itself. Though the infrastructure law does not single out communities most in need, federal agencies will likely need to comply with President Biden’s executive order that at least 40 percent of the money would flow to communities that have faced systemic racism and pollution.

Community environmental activists are eager to see what the new law finally means for their fight to clean up long-ignored toxic waste sites and hazardous sources of dirty air. For instance, Teri Blanton, a longtime grassroots organizer with Kentuckians for the Commonwealth and the Alliance for Appalachia, looks forward to the law’s investment in clean drinking water and wastewater infrastructure. The abandoned and active coal mines that run through eastern Kentucky make it one of the areas that stands to benefit. But, she told Vox, “I hope some of that comes back to the people of Appalachia.”