Homeopathy is The Royal Family’s Answer to the Flu. Why Not You? 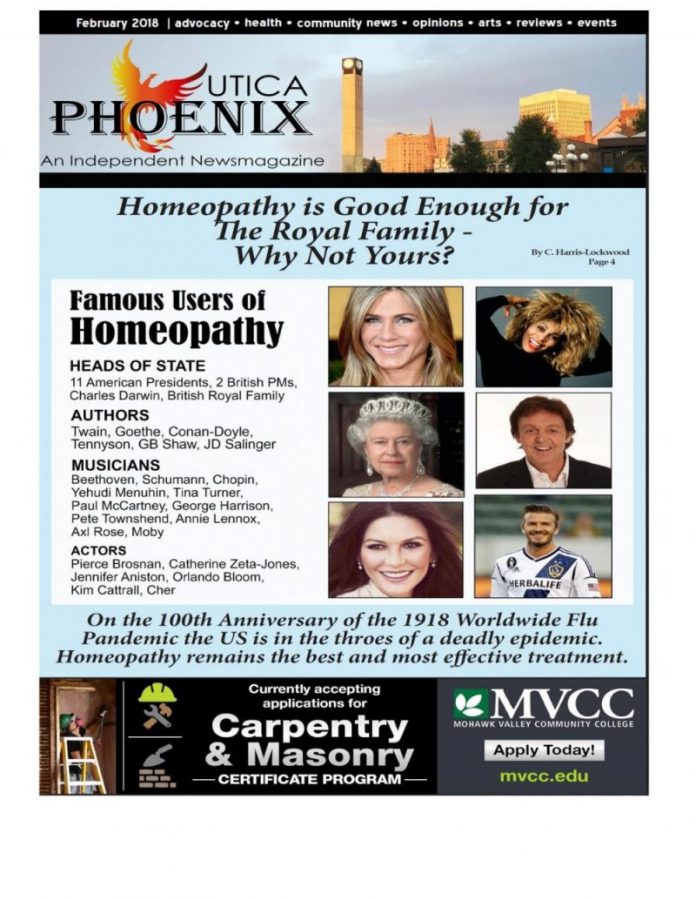 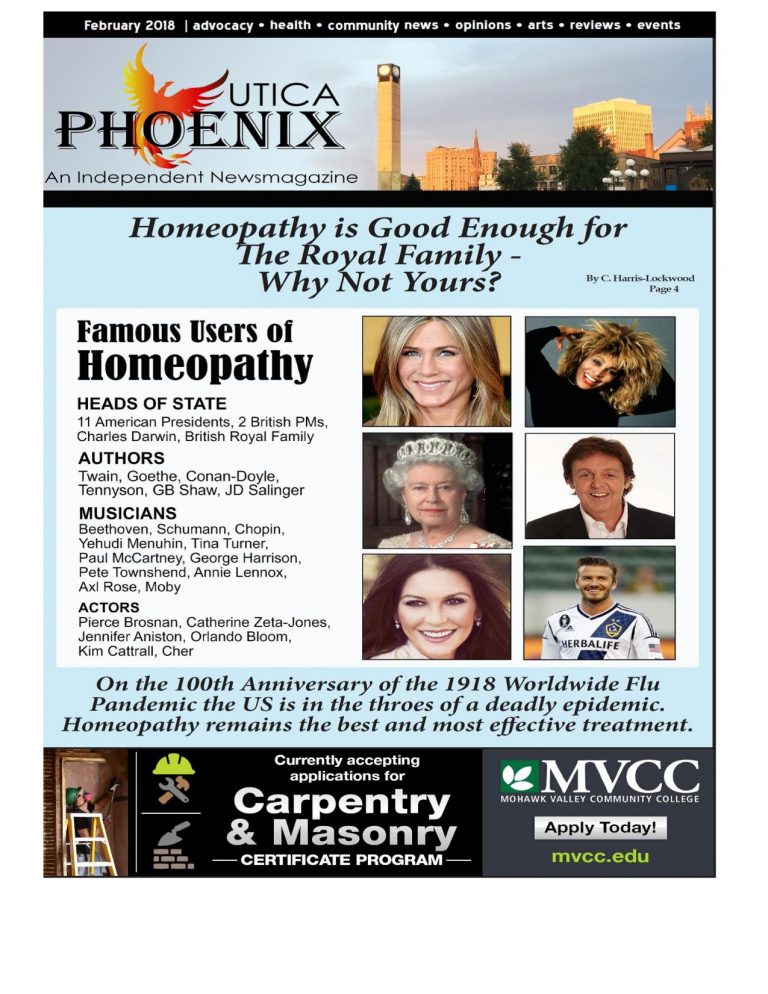 It hasn’t been named as yet but, there is an epidemic underway. A flu epidemic and interestingly one hundred years ago there was another, more widespread that actually devastated the planet. It was rightly called a pandemic and as a result, the life expectancy in the United States dropped by nearly 12 years.

The 1918 Flu Pandemic (January 1918 – December 1920) was an unusually deadly influenza episode. It was the first of the two pandemics involving the H1N1 influenza virus and infected 500 million people around the planet and resulted in the deaths of 50 to 100 million people.

This was three to five percent of the world’s population and marked it as one of the deadliest natural disasters in human history.

This year’s flu vaccine has proven to be quite ineffective in protecting humans from this deadly virus, the impact of which has outpaced the need for the vaccine as well as the few tools at the hands of most medical professionals.

However, there is an effective tool for treating the flu. It is homeopathy.

Homeopathy is a natural healing system developed in Germany more than 300 years ago. It is practiced extensively throughout Europe, India, South and Central America. The physician to her Majesty, Queen Elizabeth II, is a homeopath, who treats the entire Royal Family.

Here are a few notes from doctors 100 years ago extracted from an article entitled “Homeopathy in Influenza- A Chorus Of Fifty In Harmony” by W. A. Dewey, MD from the Journal of the American Institute Of Homeopathy in 1921.

Dean W. A. Pearson of Philadelphia Hahnemann College, collected 26,795 cases of influenza treated by homeopathic physicians with a mortality of 1.05%, while the average old school mortality was 30%.

“Thirty physicians in Connecticut responded to my request for data. They reported 6,602 cases with 55 deaths, which is less than 1%.

“In the transport service, I had 81 cases on the way over. All recovered and were landed. Every man received homeopathic treatment. One ship lost 31 on the way.” – H. A Roberts, MD, Derby, Connecticut

“In a plant of almost 8,000 workers, we had only one death. The patients were not drugged to death. Gelsemium was practically the only remedy used. We used no aspirin and no vaccines.” – Frank Wieland, MD, Chicago

“I did not lose a single case of influenza; my death rate in the pneumonia was 2.1%. The salicylates, including aspirin and quinine, were almost the sole standbys of the old school and it was a common thing to hear them speaking of losing 60% of their types of pneumonia.” – Dudley A. Williams, MD, Providence, Rhode Island

“Fifteen hundred cases were reported at the Homeopathic Medical Society of the District of Columbia with but fifteen deaths. Recoveries in the National Homeopathic Hospital were 100%” – E. F. Sappington, MD, Philadelphia.

“I have treated 1,000 cases of influenza. I have the records to show my work. I have no losses. Please give all credit to homeopathy and none to the Scotch-Irish-American!’ T. A. McCaan, MD, Dayton, Ohio.

“One physician in a Pittsburg hospital asked a nurse if she knew anything better than what he was doing because he was losing many cases. “Yes, Doctor, stop aspirin and go down to a homeopathic pharmacy, and get homeopathic remedies.” The Doctor replied: “But that is homeopathy.” “I know it, but the homeopathic doctors for whom I have nursed have not lost a single case.”

Julian Winston relates a further comment from his first homeopath, Dr. Ray Seidel:“In reading accounts of the epidemic, it seems many deaths were caused by virulent pneumonia that was especially devastating to those who depressed their system with analgesics, the most common being aspirin. Raymond Seidel told me he decided to become a homeopathic doctor when he was a 10-year-old delivery boy for a local homeopath. He said, “I saw that the people who were taking aspirin were dying, and about half of those who were drinking a lot of whiskey were dying, and those receiving homeopathic remedies were living.”

Clearly, these doctors realized impressive results beyond their peers in treating the flu. And today, homeopathy remains the best treatment for the flu. And since this year’s flu vaccine has not hit the mark… Enter Homeopathy. Homeopathy’s use is based on the symptoms. Whatever the dominant symptoms of for any given year’s flu, homeopathy has a remedy to support your immune symptom’s challenge to it.

This writer is also a homeopath and has found the same remedy used with success 100 years ago, Gelsemium, is also highly effective today.

Here is the symptom picture of the Gelsemium patient with flu…dull heavy headache back of head, sore throat with pain into ears, face feels sore, hot and heavy, sneezing, body aches, feels cold with fever, eyes look droopy, dizzy, great prostration, often thirstless, dull heavy pain in lower back, there may be diarrhea, oppression in chest with an unproductive cough and loss of voice.This is a different set of symptoms for the other highly effective remedy for this flu season, Hydrastis. The Hydrastis symptom picture includes intense sinus pressure, sneezing, stuffiness, and congestion. A headache, stuffed ears, post nasal drip, sore throat, no appetite, body aches, and pains. No energy. Then it goes into the chest which feels raw with dry, harsh coughing and more congestion there. Sometimes fever with chills and always exhaustion.

Of course, modern medical doctors have more tools at hand than 100 years ago but still if a patient does not get to the doctor for Tamiflu within 24 hours of onset, there’s nothing they have that works. And there are plenty of people who have gotten the flu shot and gotten sick anyway.

Homeopathy is a powerful, yet gentle modality of healing that makes use of infinitely small doses of different substances, either animal, plant or mineral based, to cause the body to shift and heal itself. The substances, called homeopathic remedies, are selected by their ability to cause similar complaints expressed by the patient if the substance were to be ingested full strength.

Homeopathic remedies are subject to FDA regulations through the Homeopathic Pharmacopeia of the United States (HPUS) for labeling, but the homeopathic world has its own standards for preparation and labeling. Most homeopathic remedies are known by their Latin names which ensure a worldwide reference and standard.
Homeopathy is safe for babies, children, adults, and animals under the guidance of a trained and experienced homeopathic practitioner.

Homeopathy was developed by the German physician, Dr. Samuel Hahnemann in the late 1700’s early 1800’s. Hahnemann was adverse to many of the harsh treatments a part of the practice of medicine of his time such as bloodletting. He discovered the ability of one substance to cure the same symptoms it would cause if administered in infinitesimal amounts. He phrased this potential as “like cures like.”

Homeopathy was developed by the many dedicated doctors and clinicians who labored hard and long to develop the symptom pictures that continue to guide the hands of modern-day homeopaths.

Homeopathic remedies are created by adding one drop of a tincture into a solution of water and alcohol. The mixture is then succussed, a systematic vigorous shaking, which transfers the tincture throughout the solution.

The C remedies follow the same process but instead there is one part of the tincture combined with 99 drops of solution. The number and letter combinations are the potency and strength. This is then done again and again in an ever-increasing dilution of the original tincture. The final solution is then dropped onto a small vial of blank sugar pellets that a sufferer would take by mouth.

In homeopathy, less in more. The more dilute, the higher the potency

This year the predominant remedy, described earlier, is Gelsemium, which hasn’t been in the spectrum for at least 5 years. Then there’s Hydrastis canadensis for the current “Sinus flu.”

The symptoms below are other common flu remedies. You can read through them and see the subtle and not so subtle differences in how humans manifest the flu.

This is a short list taken from Boericke’s Materia Medica on guiding symptoms for colds and flus. All flus are not alike as you will see.

Mercurius – severe sore throat hurts in ears on swallowing, sneezing, headache on one side, eye lids red and swollen, sores on tongue or in mouth, much saliva, severe sore throat with intense burning, intense thirst, heat and cold alternating in fever, much perspiration.

Flu Stop – or Oscillococcinum – general flu complaints can be taken in combination with any of the above remedies.

New to the Scene

Several years ago, when H1N1 or the Swine Flu emerged, two new remedies emerged as dominant in the human response of this ever changing disease. They are Arsenicum Album and Baptisia. These flus remain in the disease spectrum but not so common today.

The current flu shot probably focuses on these two strains as they were once but no longer are prevalent.

A guiding symptom for both is an intense sore throat, waking up in the middle of the night with feelings of suffocation, great thirst, prostration and no appetite. These symptom pictures are very similar and require a fine sense of observation to determine which one to use.

Arsenicum Album is predominantly an asthma remedy, complete with wheezing while Baptisia demonstrates vertigo and an irresistible desire to fall asleep at any time.

Pursuit of the right Remedy

Purchase of a Materia Medica is recommended for householders who are interested in homeopathy. Those interested can go online and research “homoeopathy and the flu”and seek out other books on homoeopathy for more information.

Particular attention should be given to the choice of remedy as choosing the correct remedy is essential to relieving or arresting the symptoms. The sooner you recognize the onset and begin treatment the more likely the situation is to completely resolve. Waiting until later in the disease process will reduce the flu symptoms but likely will leave the individual with a bad cold coursing through a shortened disease pattern.

Homoeopathic remedies can also be used preventively. Once you determine your remedy, or the remedy for the most prevalent type flu of the season, you can take it once a day throughout the flu season to maintain health. Flu Stop and Oscillococcinum are also effective as prophylactics.

Once the remedy is dissolved under the tongue, the body responds to only the frequency of the original substance, it shifts on a cellular level and the body heals itself.

Combination remedies and remedies in water can be administered by experienced homeopaths.

Recommended dosage: 3 pellets at least four times a day and if you wake in the night take another dose. Reduce to three times a day as you improve. Discontinue pellets when symptoms cease. Remember, don’t touch the pellets and caffeine and mint will antidote the effect of the remedy.

Locally these remedies are available at Peter’s Cornucopia and Tom’s Natural Foods or you can order online or over the phone at HomeopathyOvernight.com or calling 1-800-ARNICA30.

Until Big Pharma gets their hands out of your pocket, it’s likely that medical schools and doctors in general will continue to ignore or scoff at the many benefits of homeopathy, especially in treating the flu. But don’t let them deter your seeking out the best solutions for yourself and your family. If homeopathy is good enough for the Royal Family, its good enough for all of us.