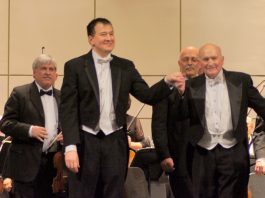 On Sunday, Jan 21, 2018, Under the baton of Maestro Charles Schneider, the Clinton Symphony Orchestra played to an enthused audience at the Clinton Central Schools Performing Arts Complex theater.

The concert ended with Peter Ilyich Tchaikovsky’s final completed symphony. The #6 in B Minor… The composer had intended to name the work the Passionate..or emotional… Symphony French translators who were publishing the piece erroneously titled it the Pathetique..and the name has stuck in all cultures except Russia.

Future CSO concerts will be announced in The Utica Phoenix.