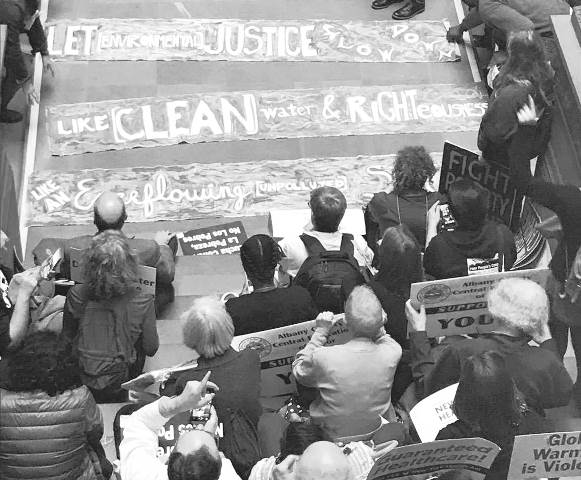 ALBANY, NY– Some 50.8 million households or 43% of households in the U.S. can’t afford a basic monthly budget for housing, food, transportation, child care, health care and a monthly smartphone bill, according to an analysis of federal data released this month by the United Way Alice Project, that aims to highlight the number of people who live in poverty.

Many residents in Central New York also cannot afford basic living expenses. They work multiple jobs but still find themselves just one paycheck away from poverty. Consider these statistics for the City of Utica which has a population of 62,235:

Community and faith-based groups feel it is time now to resurrect the Poor People’s Campaign here in Central New York to help people out of poverty. Dr. Martin Luther King often said he believed that “the arc of the moral universe is long, but it bends toward justice.” Mobilizing residents, community groups, workers, the disabled, aged, the youth, and many thousands of forgotten people in poverty are necessary to ensure that this arc continues bending towards justice.

Calling on elected officials to guarantee healthcare and a healthy environment for all, dozens of poor people, clergy and advocates from Central New York and other parts of the state were arrested at the Capitol Monday, June 4 as the New York State Poor People’s Campaign: A National Call for Moral Revival intensified during its fourth straight week of nonviolent direct action. The action in New York was part of a wave of protests hitting 35 state capitals and Washington, D.C.

Monday’s protest highlighted how environmental issues like pollution and climate change disproportionately affect people living in poverty, including many Indigenous and people of color communities. Over 200 participants in Monday’s nonviolent direct action held a speak-out on the Million Dollar Staircase about the right to universal, high quality, affordable healthcare and to a clean and safe environment. They then brought their demands to state decision makers and blocked entrances to the Senate Chamber and to the Governor’s office. Other participants rallied and sang outside the Assembly Chamber and strongly voiced their demands.

Tanya Grant of 1199 SEIU United Healthcare workers stated: “I represent healthcare workers across New York State. In my travels, those who take care of others often can’t afford health coverage themselves. They work 2 and 3 jobs because they can’t afford the health insurance offered by their employer. They have to come to work and take care of the vulnerable while in a vulnerable position themselves. Ms. Grant continued: “That’s because the healthcare industry is about the dollar. Not one of the institutions’ owners every worry about going to see a doctor, or taking off work for an injury, or being able to provide healthcare for their children.”

UN: POVERTY GETTING WORSE UNDER TRUMP

In 35 state capitals, poor people, clergy, and advocates demanded the right to healthcare and a healthy environment for all. The protests Monday come days after U.N. officials sounded the alarm on the Trump administration’s efforts to undermine social safety net programs for the poor.

On this Saturday, Philip Alston, U.N. special rapporteur on extreme poverty, criticized rollbacks to healthcare and human service benefits in the U.S. over the past year, which aim to “punish those who are not in employment and make even basic health care into a privilege to be earned rather than a right of citizenship.” He said that under the Trump administration and the current Congress, America’s poor are becoming more destitute.

The U.S. spends more per capita on health care than any other country, at approximately $10,348 per person per year, yet there are more than 32 million people who lack health insurance in America, including 4.6 million Black people, 10.2 million Latinx and 13.6 million Whites. And environmental degradation in the U.S. exacerbates the healthcare crisis hurting America’s poor the most: at least 4 million families in the U.S. are exposed to high levels of lead from drinking water and other sources, while an estimated 13.8 million U.S. households cannot afford water.

The Campaign draws on the unfinished work of the 1968 Poor People’s Campaign, reigniting the effort led by civil rights organizations, labor union and tenant unions, farm workers, Native American elders and grassroots organizers to foster a moral revolution of values. Despite real political wins in 1968 and beyond, the original Poor People’s Campaign was tragically cut short, both by Dr. King’s assassination and by the subversion of the coalition that sustained it. Still, the original vision and many of its followers did not go away.

The Poor People’s Campaign: A National Call for Moral is building a broad and deep national moral movement – rooted in the leadership of poor people and reflecting the great moral teachings – to unite our country from the bottom up. Coalitions have formed in 39 states and Washington, D.C. to challenge extremism locally and at the federal level and to demand a moral agenda for the common good.