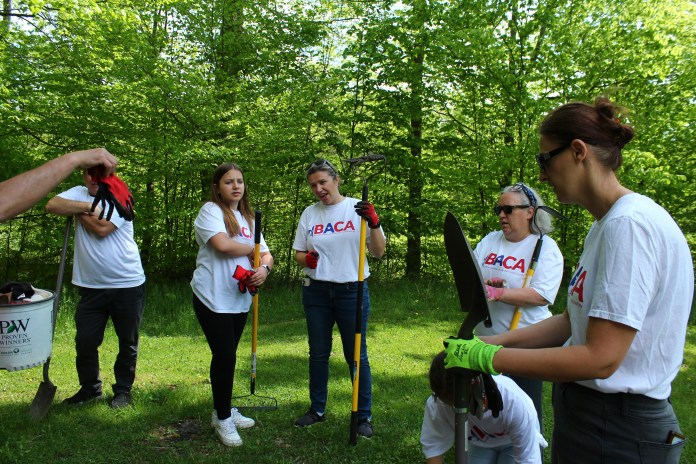 Saturday morning, city council member Celeste Friend and local Bosnians, who have been a part of the area for decades now, lent a hand in restoring Utica’s beauty. The organization in charge of this was Olmsted City of Greater Utica, an organization dedicated to the restoration and revitalization of Utica’s many parks. Saturday’s project in particular was the landscaping of a new garden area of Proctor Park. This new garden will feature a lovely little stone raised garden surrounded by seats. Of course, the land must be prepared, and such preparation requires labor. Fortunately, there are a great many Uticans ready to volunteer their time to aid Olmsted City in their efforts as they both have vested interests in seeing Utica look a bit better. That’s where the Bosnian American Community Association came in. Sandro Sehic, BACA’s director, freely offered his group’s time and energy to help in Saturday’s project, which serves as great reminder that immigrants often quickly become a great benefactor to their adopted homes. A generation ago, the Bosnians were fleeing genocide in the Balkans with nothing to their names, and now they are an active force in Utica restoring its parks to their former greatness. 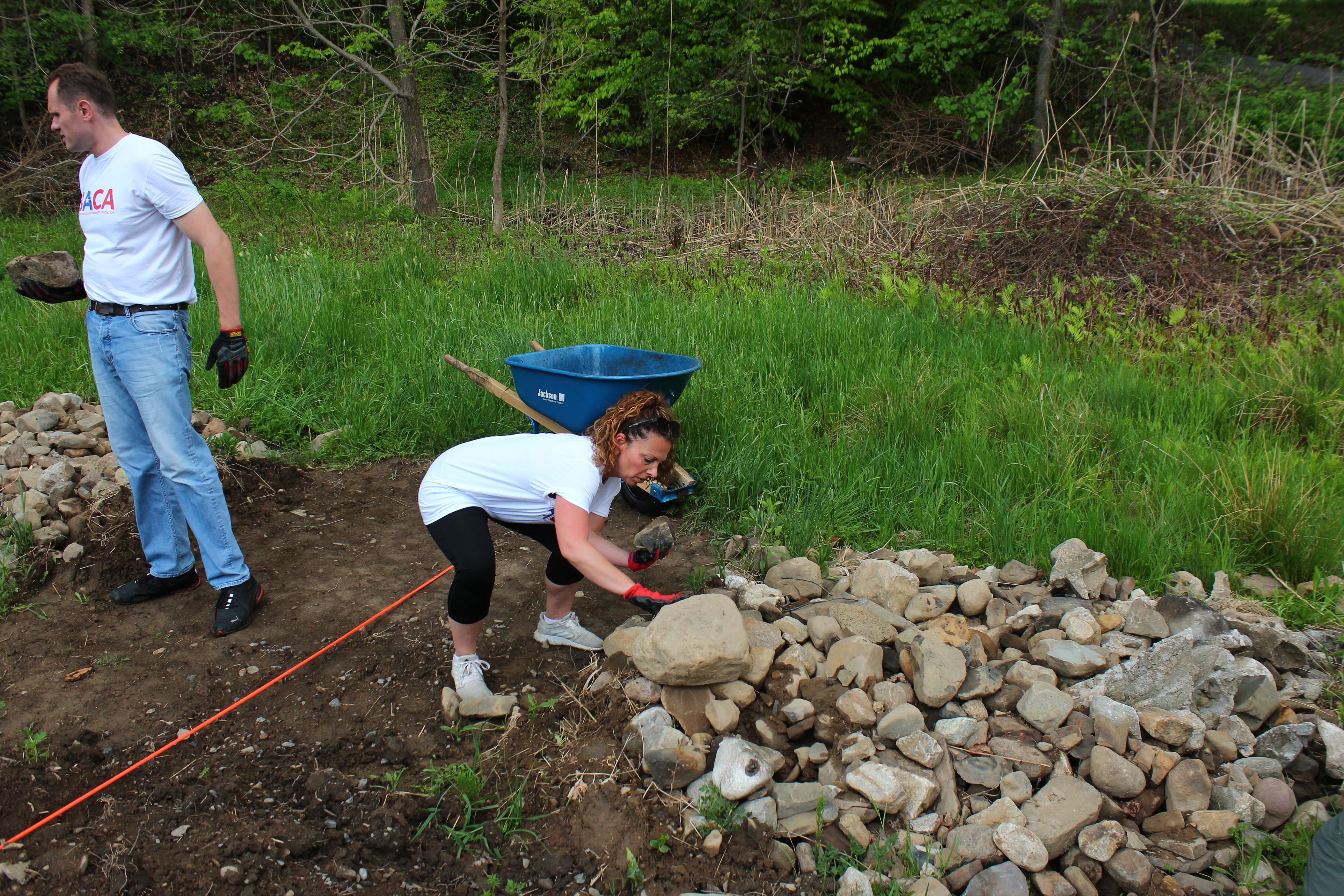 The day was hot and muggy on an unforgivable scale. The people however set out down the trail and began their work on the garden. The ground needed to be smoothed out around the circular stone raised garden, meaning that the volunteers had to lay heavy rocks down and then move large amounts of earth over those rocks. This work was hard but carried out with enthusiasm. The rain began at midday and presented a welcome relief to everyone (myself included who felt compelled to help out). Taking shelter under a tree, the younger American born Bosnian children taught some new English vocabulary to their parents. 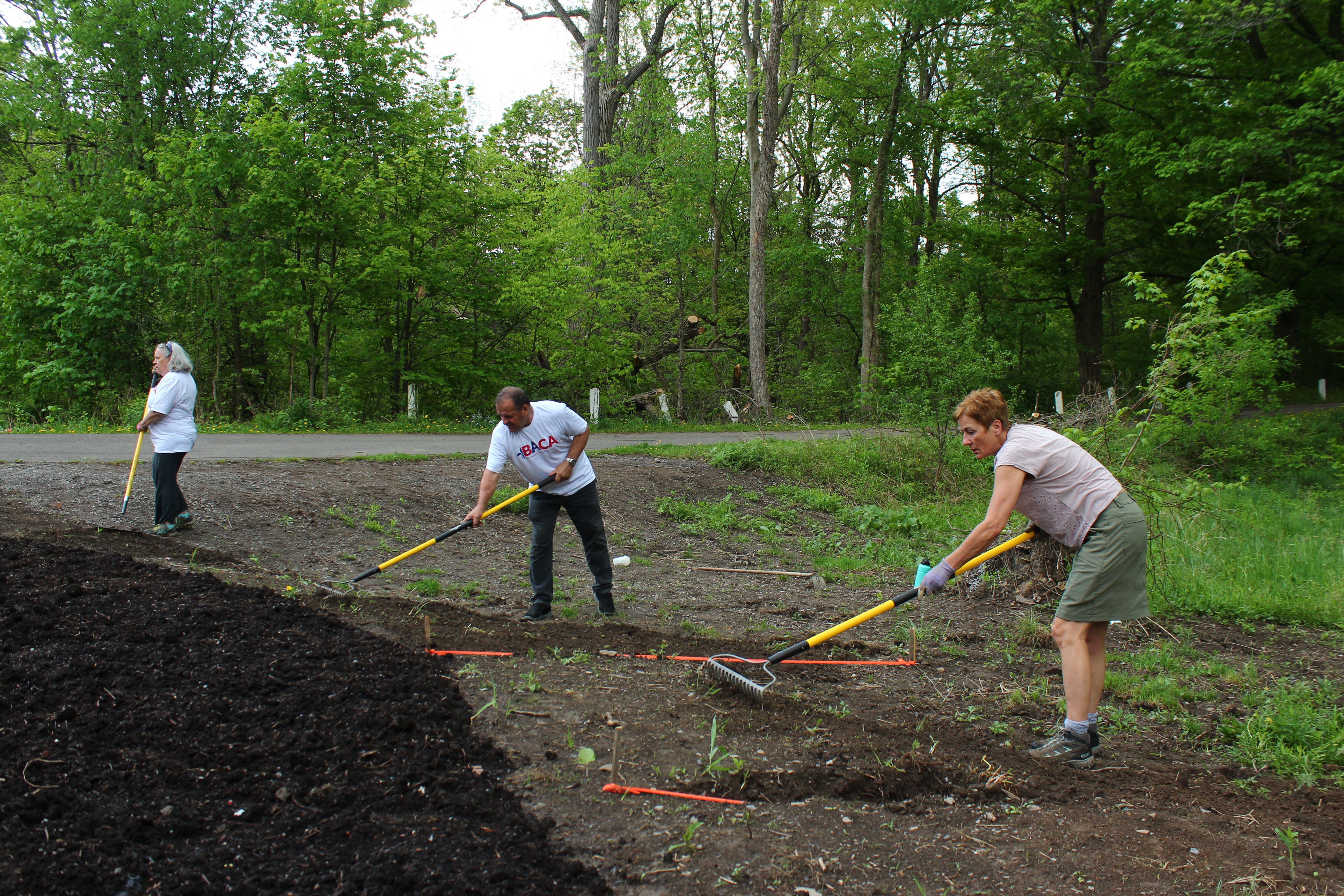 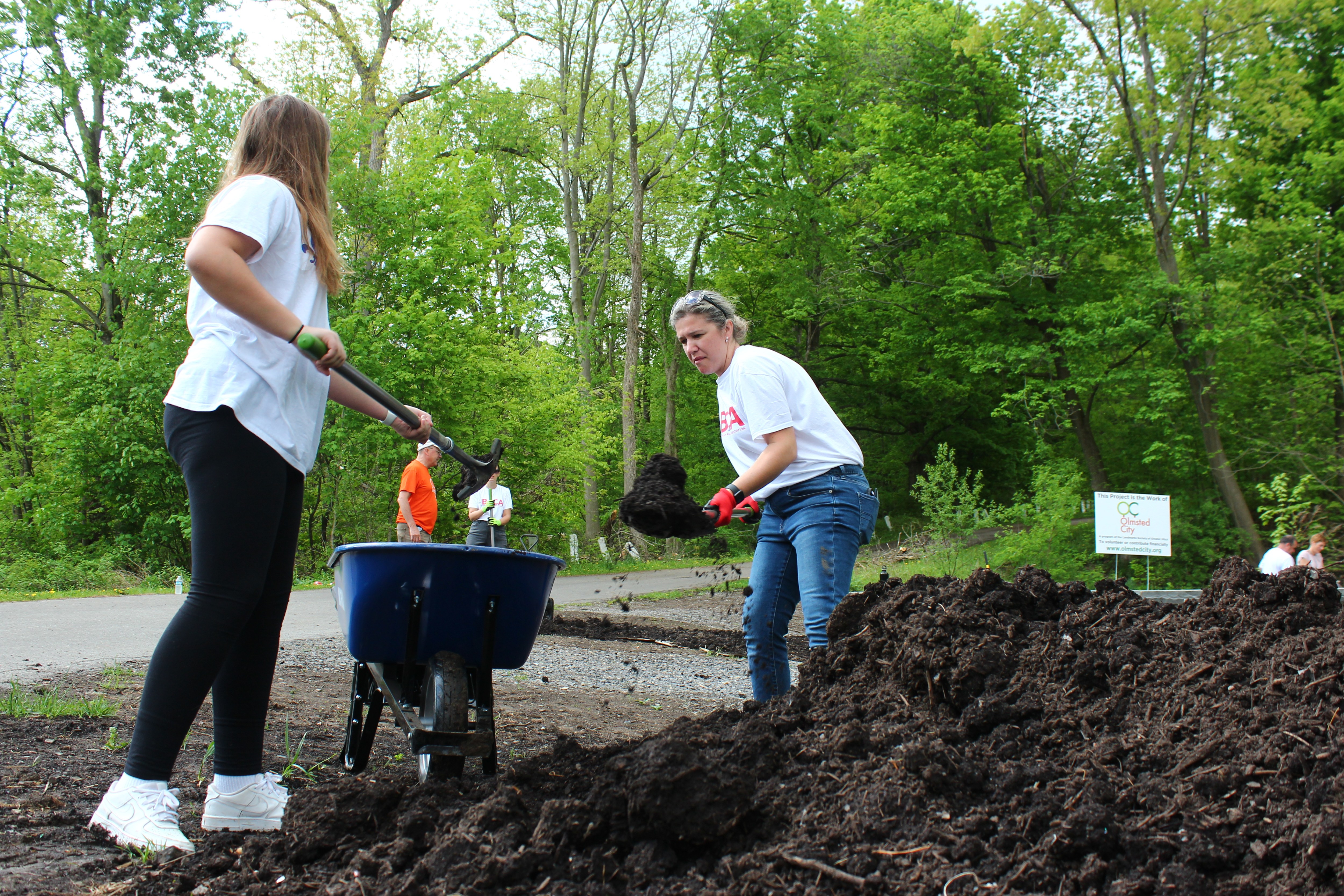 Once the rain ended, I spoke with one of the leaders of Olmsted City, Phil Bean, who told me about the importance of today’s work.

“The Olmsted parks and parkway system is the largest single quality of life amenity in this town. It’s 600 acres, 70% the size of Central Park [NYC], and that is surely going to be attractive to – and we know it is from talking to people who’ve moved here – outsiders who are thinking of relocating here, or have to relocate here for jobs. We want to go much further than just saying “Yeah, we have these nice parks”. We underscore the point that about a 10th of the land mass of Utica (more if you factor in the wet lands that nobody ever builds on) was designed by Olmsted Brothers which was the premier American landscaping company in the first half of the 20th century.” The Olmsted’s designed Central Park, the White House landscaping, and even five of Utica’s neighborhoods, and Bean wants people to remember this and take pride in their city. He believes that revitalizing the parks will attract people to Utica and his efforts on Saturday are one of many steps towards that. Bean also cited another bonus to having nice parks. “There’s all kinds of public health research that shows that people who spend time in public urban parks like this enjoy measurable mental and physical health benefits. Study’s have shown that if you just sit on the kind of bench that they’re [putting here] in a public park like this, it actually lowers your blood pressure. Just by doing nothing but hanging out in places like this you can derive health benefits. But our hope is that most people though, will be drawn by these destinations to walk through the entire park and get the fullest benefits possible.” With such benefits of treasured Olmsted parks and the commitment of our local Bosnian population, perhaps Utica will indeed turn the corner and see some better days soon.