At the Movies: With Mark Ziobro 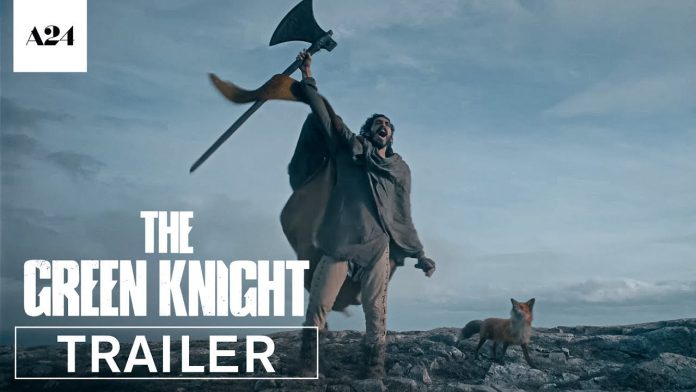 At the Movies With Mark Ziobro

Historic fantasy has often been used in cinema as a subject. At the same time, many of those stories played out well and have done wonders. These stories have mostly come from the innovative and creative minds of writers who can think beyond one’s understanding. One of the things that these stories left us with is the experience of the visual and the world we have not seen. The recently released film The Green Knight, directed by David Lowrey, is another addition.

The story follows a young man named Gawain (Dev Patel) and his quest to become a knight.  King Arthur (Sean Harris) is his uncle who tells him to sit next to Queen Guinevere (Kate Dickie). They all get to gather to celebrate Christmas together. Gawain is alone as his mother, Morgan Le Fay (Sarita Choudhury), and his king brother is away. While he was trying to connect with his kinfolk, king Arthur entreaty Gawain recanted a tale of his life to engage all who would hear. Being an unpracticed knight at the moment, Gawain tells him that he has no stories to share. Concluding that he has yet to have come up against that is significantly adequate to mention them into legend.

As Gawain’s and the King’s consultation is finished. A dark green creature with a conifer-like trait known as the” Green Knight” (Ralph Ineson) interrupts the festivities with a proposal that is a challenge to anyone willing to take it. To make a name for himself, young Gawain accepts the challenge but takes the game way too far. Thus, misinterpreting this game’s point and pompously slashes the green knight’s head to the end of his demise. But the Knight stands up, untouched by the attack he had just been faced with. And reminds him that he must be on the lookout for him after one year and experience the self-same punishment he encounters. Gawain starts considering himself a winner and feels a sense of accomplishment. As time moves away, the actuality of his action and its repercussions start striking him. He decides to leave the castle and come back after a year to reencounter the Green Knight. The story focuses on the journey of the young King who is going through various hardships to gain a story for himself that he can share with all. The journey of young men becoming the Knight and facing the repercussions forms a story.

David Lowrey plays multiple caps from being director, writer, editor, and producer. One of the things that are pretty evident in the film is that it has fantasy written to connect with it. The screenplay is sharply formed and so are the dialogues. The Green Knight is a stupendous presentation of the saga of a callow young man who finds himself on a search convention by several advisers. The medieval poetic core of the original substances is admitted in the calligraphy of the segments with the movie adaptation of chivalric romance by Anonymous.’

Visually the film is magnificent; it displays flabbergasting visuals and computer-generated images that connect with the live-action shots. It’s definitely evident in the story that how the visual itself plays a character in the film, and a major credit goes to Andrew Droz Palermo’s cinematography. The superficial shots emerge impeccably, and the intramural shots appear dim due to light yet workout finely. Each short of the film showcases depth also the selection of fabrics that contrast the earthy greys and greens of the landscape to the intricate design of singles and crowns. Regular Elsewhere. Daniel Hart has done exceptionally with the music, evident from the beginning frame till the end. Combining choral arias with evocative violin arrangements and unnerving calls fits exemplary. The vibrant score goes along with the visuals to upraise the viewing occurrences. Finally, with inventive production work and an exciting narrative, the Green Knight takes the viewer to the dreamy fantasy that feels real.

Dev Patel is one actor who has always impressed us with his performances. With this film, he adds another one to his impressive list. He played the role of Gawain in sync ideally. The way he delivers his dialogues to the way he holds his expressions is marvelous. He has given both versions of the same character to show his dedication to his craft as an actor. The other supporting cast such as Alicia Vikander, Sarita Choudhury, Joel Edgerton, and Sam Harris, are perfect in their parts.

Some might find The Green Knight too slow-moving, but it takes time to make peace, and with patience, you get the best quote in the context of this film. David Lowrey put in the profundity of this ancient saga, bringing the places where the mortal and the mystical intersect, where the earthen meets the exquisite. The outcome is a transfixing and remarkable cinematic experience.

Overall, The Green Knight is a visual delight film that should not be missing.  The film has all the needed elements from intelligent writing to direction to visual to acting. This film is the right pick for each one, whether they are fans of historical fantasy or not.

If you like to see the film, you can watch it through VOD (video on demand) on Prime videos, Vudu, A24 Screening Room, and another streaming platform.