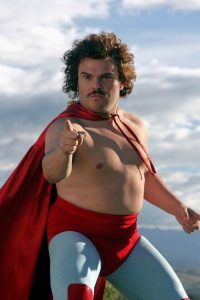 I was shocked to learn that “Nacho Libre,” the tempered and anticlimactic comedy starring Jack Black was actually loosely based on true events, the tribulations of Sergio Gutiérrez Benítez, a Mexican Catholic priest who had a 23-year career as a luchador to support his orphanage. What shocked me more, was the treatment given the film by both Paramount Pictures, who produced, and Jack Black—who present the material with sweetness and deference. Surely a pratfall or hijinks-induced laugh-fest would have been easier to make. But what we find here is a fun and endearing film that watches well, as well as casting a light on that early, pre-“Jumanji” Jack Black—you know, the one who did 2003’s “The School of Rock” and was just hysterical, lovable, and fun.

There’s not a lot of plot here, but, jokes aside, there’s an anthem to “Nacho Libre”—of how lost dreams always have a way of finding their way back—that is great fodder for this story. As a youngster, Ignacio (or Nacho, played by Jack Black) could never let the dream of one day becoming a luchador (Mexican wrestler) go.

As he finds his way into a Monastery as an orphan, he is stripped of this, and made a monk; as an adult, his duties involving cooking soups for the new orphans with zilch for ingredients, and being shunned by the elder monk (Julio Sandoval) as a pariah. He draws pictures of his ideal wrestling suit in church when he should be listening to sermons…and, lo and behold, one day gets a recruit (Héctor Jiménez), and begins tag team wrestling in downtown Oaxaca. That Ignacio uses his winnings (even from losses) to buy the orphanage better food only makes the movie that much more endearing.

As usual, Black is hysterical here; but, oddly, his gyrating, lip synching, fall-out-of-your-chair laughter is constrained to only momentary snippets, director and co-writer Jared Hess having other plans for Ignacio. Early parts of the movie shift between Nacho’s growing friendship with Jiménez’ Esqueleto (which is funny and sweet), and his affections for a new nun at the Monastery, played by Ana de la Reguera, a Mexican-born actress who in 2008 went on to become the new face for Cover Girl worldwide (yes, she’s way too gorgeous to be a nun at an impoverished Monastery, but it’s a comedy, just go with it, okay?). Hess and Black tiptoe around a love interest for Nacho here, but it’s so silly and zany that even religious-minded folk probably wouldn’t even bat an eye. This is a family film, and there’s probably not an offensive thing in it

I feel I’m failing to fully paint the charm of this movie—which is easy to do, alongside a lashing by critics such as Roger Ebert and a 39% Tomatometer score on Rotten Tomatoes. But scores like these only work if your thought process goes something like this…’the film stars Jack Black, Black is supposed to be funny! and this movie just doesn’t measure up.’
But, honestly, “Nacho Libre” is funny, but in a more understated way than fans of Black are used to. Yes, he ad libs some hysterical sounds a la Tenacious D, and yes, he flies through the air…and lands on his face, his back, and just about every other place imaginable. In the film’s most hysterical sequence, he and Jiménez beat each other up to toughen up for their first match, and the scene includes a lot of insanity—including Black hurling a bee’s nest at Jiménez who screams in soprano as he’s savagely stung.

In fairness, “Libre” meanders a bit, throwing its hands up in the air at jokes that don’t land, plots that don’t get developed, and a climax (between Nacho and this movie’s answer for Apollo Creed, a fierce luchador named ‘Ramses’-played by César Gonzalez) that doesn’t even feel that exciting. But, by the time you get to this scene you oddly realize it’s not supposed to. This is an anti trope film: the love interest that really isn’t, the villain(s) that could have been but aren’t, and it teases punchlines and climaxes only to pull back and present watered-down drama that may not be what most are expecting. But, for better or worse, “Libre” succeeds in being a very watchable film that will make you smile, as long as you’re willing to let go and just enjoy it.

At the end of the day, “Nacho Libre” isn’t long to be remembered as one of Black’s most memorable, nor his most prolific. Black has been on record several times stating his desire for a sequel; but, honestly, I couldn’t see this working. “Libre” is a one-of-a-kind, off-beat head scratcher that pays homage and fondness to this style of Mexican wrestling, paints lovable characters that learn life lessons, and displays Oaxaca, Mexico fondly and with heart. Its closing scene is anticlimactic yet sweet. If you’re a fan of “Nacho Libre,” you’ll understand this without much effort. If not, any of Black’s other work is likely a better bet to pass your time.