At the movies: ‘Free Solo’ 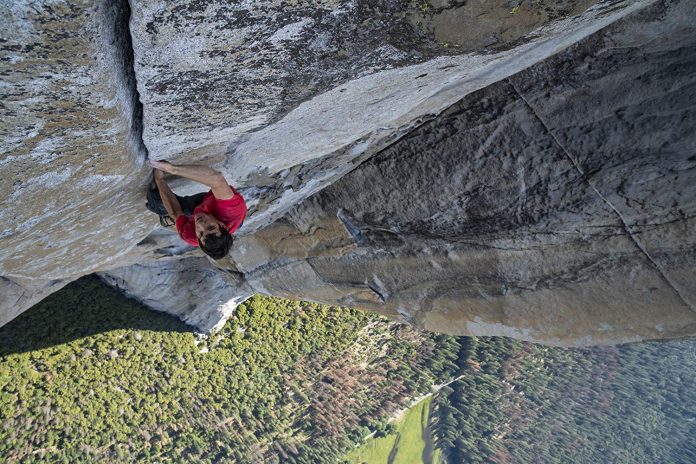 Alex Honnold is a free soloist. To those who don’t know what that means, it’s mountain climbing without a rope. For the documentary “Free Solo,” the subject of Alex’s climb is El Capitain in Yosemite Park, a 3,000 ft. sheer rock face.  The film isn’t about what ifs – Honnold completed his perilous ascent on June 3, 2017 in under 4 hours, becoming the first person alive to ever free solo the summit. However stupendous this achievement, “Free Solo’s” greatest achievement is that it places you alongside Alex while also allowing understanding into his motives and challenges.

As well produced as “Free Solo” is as a documentary, there’s something unnerving about it, a palpable fear that runs through it as we watch Honnold attempt his summit.  People around him respect him as a climber (he’s appeared in a litany of climbing magazines) and, as he admits, was lucky enough to have his passion turn into a career. But there’s something missing from Honnold, both a sense of fear of his own risk and a lack of empathy towards those who love him and fear for him that “Free Solo” is expert at capturing in full.

Shin and Vasarhelyi let us know pretty early in how dangerous this profession is. We see one of Honnold’s climbing buddies make the assertion that “anyone who makes free soloing a full-time effort dies.” It’s a terrifying concept; but we get the impression that Honnold, who is every bit aware of the possible end game, doesn’t really get it. His girlfriend, Sanni McCandless, discovers this as well in a conversation about the risks and if he would stop free soloing to commit to their relationship. “I understand where you’re coming from,” he replies as they’ve rehearsed to work on his communication in the relationship. “But I don’t feel obligated.”

Alex is an encyclopedia of climbing knowledge. He will admit fear over the various difficult “pitches” of the mountain (stages he must go through to finish the climb), and talks about completing this handhold here, this leg stretch there, this mini jump…all without regard to the consequence of what will happen if he misses one of these feats. He seems invincible; but we see that after a fall during a practice climb that leads to a broken ankle) that one mistake on the can lead to instant death.

What the documentary does well is to make the film about his preparation more than his summit; so much so that the actual climb is reserved for the last 15 minutes of screen-time, often with speed throughs of a chalked path to denote his progress. Shin and Vasarhelyi shine the camera on.

If it sounds like “Free Solo” is less the exciting climbing film you might be hoping for, and more an exercise in psychology and patience, you’d be right. This film doesn’t make free soloing look sexy, but dangerous, and you truly get the impression that Honnold is on borrowed time.

“Free Solo” is an achievement of a film. It completely brings you into the picture and into Honnold’s world.  Also, the film give viewers a sense of extreme accomplishment and wonder. The film ends, much like it began, with a spotlight on his nature.  After completing the climb and reuniting with his girlfriend, Honnold closes the film by practicing finger holds from the door of his van. A sense of accomplishment and drive pushes this film towards wonder – but its subject’s psychology, which it captures perfectly and without error – is what drives it to perfection.

Facebook
Twitter
Previous articleVoices of Polonia: John Gronouski Jr.
Next articleBooks: How Voter Supression is Destroying Our Democracy – a review