Apparently La La Anthony Is Looking For A Love Like 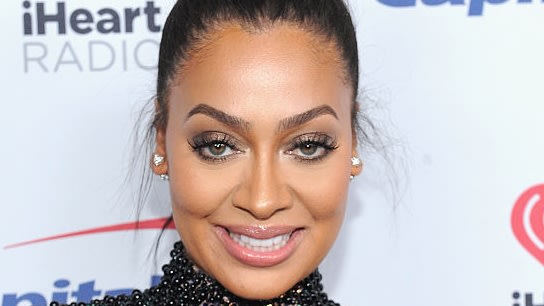 La La Anthony hints she’s ready for a love like the one between her friends Ciara and Russell Wilson. The Power actress shared a Happy New Year post that caught the attention of many Instagram users. With a photo of her posed in a nude, body-hugging dress on top of a bathroom sink, she told her 12.6 million followers everything she’s wishing for in the coming year.

“I brought in the New Year a little different this year. Kept things calm which is not my usual AT ALL lol but instead of being down about it I had to remind myself maybe that’s exactly what I needed. Time to myself & time with me & Kiyan just to reflect & be grateful for all the blessings in our lives. We wrote down some goals & manifestations for 2022 so cheers to that. Wishing everyone an amazing New Year with more LOVE more BLESSINGS, GOOD HEALTH and most of all HAPPINESS. Love y’all so much,” she wrote.

She added at the end of the message: “Ps. I saw what YOU did for Ciara (I mean I was around for that) and what u did for Issa and Molly from Insecure sooooo… yeah u know the rest.”

Anthony recently split from NBA star Carmelo Anthony last June. She filed for a divorce after 10 years of marriage amid rumors that the Lakers player was unfaithful throughout their marriage and had fathered a child with another woman.
Anthony spoke on the fresh divorce during her appearance on The Angie Martinez Show, admitting that the years of infidelity rumors still “hit [her] really hard” despite her never showing it publicly. But it looks like she’s possibly had a change of heart on love.
“Marriage, I don’t think I can do that ever again,” she said. “I mean some, like, amazing person would have to come. I don’t see that happening again. But I don’t know what God has in store for me.”