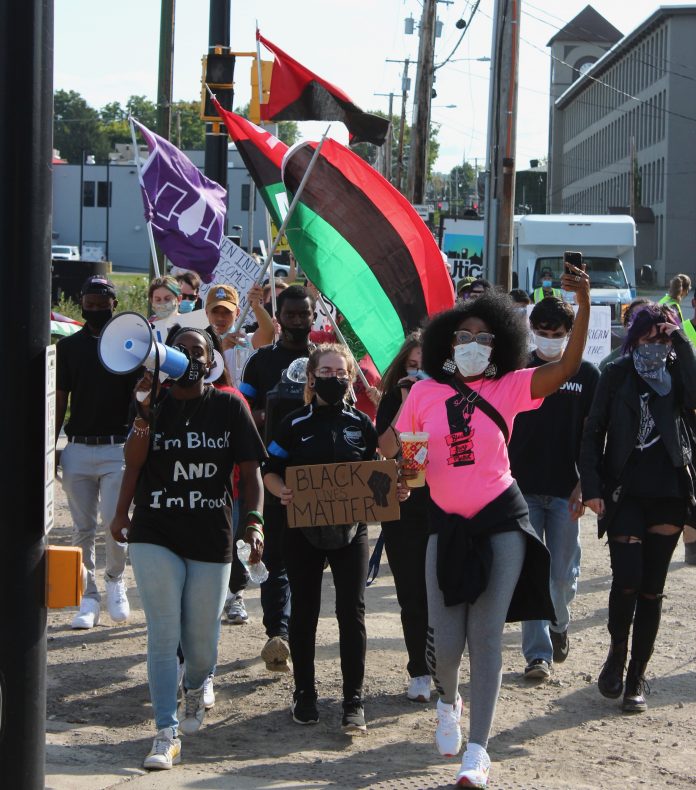 A local Black Rights activist, Kim Jones, hosted a march on UPD Station Saturday the 12th that would lead to another two days of protests. Kim Jones collaborated with a local activist group known as the Abolitionists. The protests were in response to the incident of police brutality perpetrated by officer Matthew Felitto who while transporting an already arrested suspect (a Black man named Kerwin Talyor) stomped on the suspect’s head repeatedly. The suspect was shackled and laying down on the floor of a police van when this occurred. Perhaps fearing the violent turmoil that erupted in Rochester stemming from the leaked footage of police killing Daniel Prude, Utica Mayor Palmieri and the UPD rapidly responded by suspending Felitto without pay and publicly shaming him for his use of excessive force.

On the first day, Kim Jones and other local activists stated that while they are happy to see the city government respond so quickly, and not sweep this under the rug, they still would protest to demand Felitto’s immediate termination from the force.

The night before, a rumor rocked the city that busses full of protesters were descending upon the city, and that all of the hotels were booked up with protesters hell bent on fermenting a riot that would make Rochester look like a walk in the park. The specific target in this rumor was the New Hartford Shopping Center.

A reporter for the Phoenix called 5 hotels in the area, and they all denied having any masses arrive.

The rumor started on CraigsList and has yet to be traced to its original source. The list of possibilities and motives for starting this rumor are vast. Perhaps it was a rogue Right Winger trying to discredit the BLM protesters. Maybe it was a Left-Winger trying to spread an easily disproven rumor to make it look like the Right was trying to spread rumors. Some say it was possibly Congressional candidate Claudia Tenney, however there is virtually no proof and her campaign has formally denied that accusation. Whoever spread the rumor may remain a mystery forever, but it does demand the examination of two things:

1) This rumor, despite being false, could’ve led to Right-wing counter protesters massing aggressively to counter the Left. This would’ve created escalation that surely would’ve amounted to violence in the streets.

2) The fact that nobody actually rioted or committed violence whatsoever is something that sets Utica apart right now and has become a symbol of pride for the residents. In fact, the Abolitionists gave donuts to the UPD for their speedy response in dealing with Felitto, which is hardly the action of a violent mob.

The following is a Complete list of New Hartford Shopping Center businesses that boarded up their storefronts in light of a CraigsList ad:

On Saturday, activists rallied at Oneida Square and were joined by perhaps 50 people, and several members of the Pro-Trump organization known as Back-the-Blue stood on the opposite side of the street to watch what happens. As they refused to speak to any members of the press, their intent is still unknown. Conflict between the two factions went no further than a younger Back-The-Blue gentleman standing in the street shouting passages from the bible in staunch opposition to the BLM activists.

Kim Jones christened the march with her speech in which she declared that in order for people to be free of what she calls a corrupt system, people must literally become independent of it. Essentially creating separate and independent societies. Though not exclusively for Black people, she wants these societies to be safe havens for Blacks, but they will welcome anyone of any race. Previously she had told me of how she was inspired by the MOVE commune of inner city Philadelphia of the 1980’s. She believes that the only way forward is for Blacks to become completely politically/economically self-sufficient. 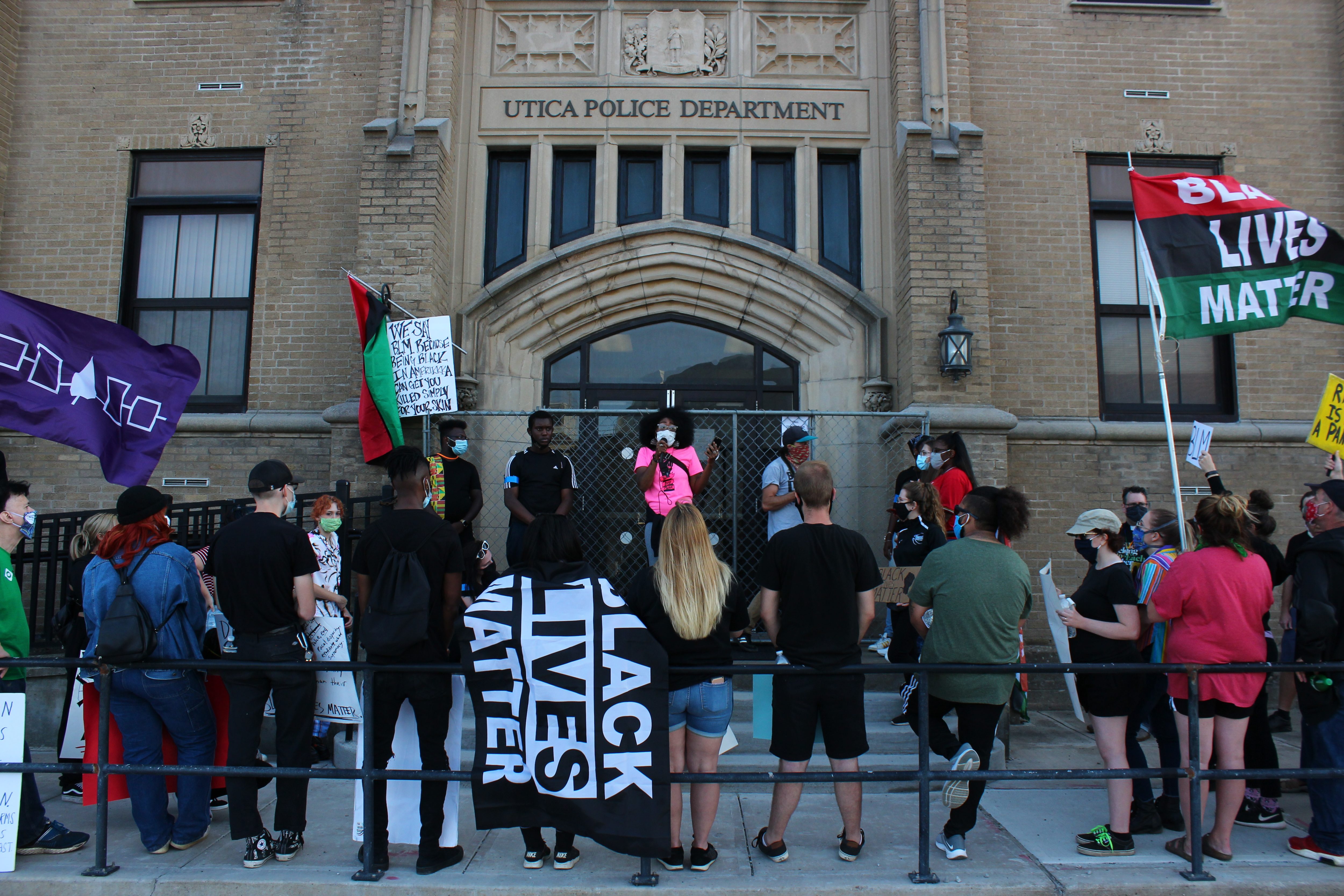 Throughout all of this, police presence was at a minimum. Simply a few patrol cars swinging around every now and again.

A man named Kyle observed the entire event from the sidelines. He was somewhat conflicted as he agrees with what some of the protesters say and disagrees with other things they say.

“See, I can’t 100 percent put myself in their [police officers] shoes because I’m not an officer, but I think if you were to be an officer, you’d have to go in there in the mindset as to serve and protect.” Later, he also said, “The same thing that goes into being an officer; I don’t know what it’s like to live as a black person. I’m not Black, I’m White. So, I kind of understand where they’re coming from and why they’re so angry.”

By the end of the event Kyle was no longer on the sidelines, but conversing with the protestors.

The next day, the rally happened again. Same time and the same place. The rain stripped the number of participants down to only a handful showing up. Kim Jones was not there. According to both parties, Kim Jones “bowed out” after day 1 due to a difference of politics with the Abolitionists. The determination of those that did show up was quite apparent. This time they marched on City Hall and taped their demands on the front door. Again, police presence was minimal. 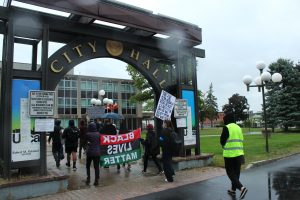 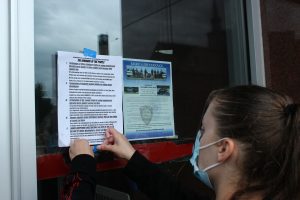 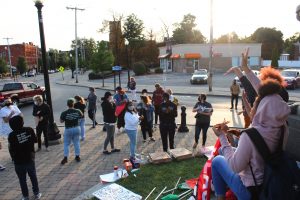 Monday’s sunny weather allowed more of a crowd to rally. A Dunkin Donuts employee came out to the protesters and offered a couple boxes of donuts, which were graciously accepted. The protesters were this time joined by the cousin of Kerwin Taylor (the man beaten by officer Felitto). Taylor’s cousin spoke with me about his family’s reaction to all of this.

Phoenix: “How is his family coping with everything?”

KT cousin: “I’m mean we’re good at this point, but we’re just mad that we couldn’t go to court today because of Covid, of course. But, from this point on, we’re just gonna wait. Wait and see what we [are] dealt.”

Phoenix: “Overall, would you say you or your family is happy with the way the city has responded, by suspending Filetto immediately or are you guys not happy?”

KT cousin: “Yeah, we’re happy. Of Course. Who’s not gonna be happy? But for me…I just think he should be fired. He was treating my cousin’s face like a dance hall. I don’t think that no cops should be back on duty after doing something like that.”

There were people present from Syracuse to Herkimer. One man named, Jack Murphy, when asked why he was supporting the protests said, “I’m pretty much out here because…I don’t like seeing people be nasty to each other. The brotherhood of Man. There’s nothing complicated about it.”

The event ended with the protesters having pizza and donuts and trying to get to know each other and share experiences that bind them together, and then Kerwin Taylor’s cousin began singing.

So, the three days of protests ended without so much as a shouting match and certainly no riots. How we all survived this, we shall never know.