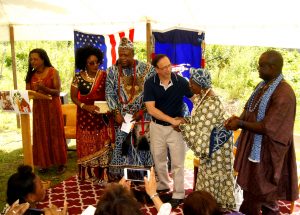 On Friday, July 28, 2017, For The Good Inc. (FTG) presented to the community  an event of monumental, historical, cultural importance. For the first time in the history of the Mohawk Valley, a king from the beautiful Central African country of Cameroon, made scheduled stops in Utica and Clinton as part of an international tour beginning with the United States.

Utica’s most dynamic non-profit, FTG, uniquely qualified and up to the challenge, hosted the first African king to ever visit Utica, New York. The unique request came from Clinton business owner, Jack Buschman, who reached out to CEO, Cassandra Harris- Lockwood, on behalf of the king’s nephew Augustin Douya, official Ambassador of King Tchoua Kemajou Vincent of Bazou. 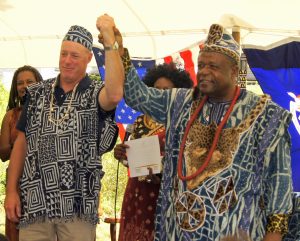 “I met Augustine at my place of business,” explained Buschman, owner of the Village Tavern. “He is an Engineer for Verizon and was installing a unit there.” After a bit of time, they developed a friendship. Buschman eventually showed Augustine his, farm MKJ Farms in Deansboro.

There was no way he could have known Augustin was the Ambassador of The Bazou Kingdom and was not prepared for the next request. “My uncle, the king of the Bazou people in Cameroon, is coming to visit.  Could you provide him with a tour of the farm when he comes?” Augustine asked. Clearly flattered, Buschman answered in the affirmative, agreeing to not only show him the farm but to host the king and his wife, King Tchoua Kemajou Vincent of Bazou, for two days.

Jack Buschman knows the lay of the land in and around the area and according to him, “I wondered how I was going to make way for a king? The first person I thought of was Cassandra Harris-Lockwood. I’ve known her for years and knew she had to be involved to do it right.”

His wise decision to include FTG helped make history. The staff at FTG, under the watchful eye of consultant Susan Woods, left no stone unturned by providing a regal atmosphere befitting a royal presence. In Utica’s first raised bed garden, now ten years old, King Vincent Tchoua Kemajou of The Bazou people of Cameroon would meet and greet the people of Utica, including the First People (the Haudenosaunee), with an otherworldly air of grace and dignity.

The rich colors of the garden, magnificent in full sun, the flags, the many robes, the rug, the greens of the plants, the blue of the skies became a spectacular and brilliant offering of light. For The Good created a space, a landing place for the cultures of the New World and the Old World to join as its people did so long ago.

Harris-Lockwood spoke to that reality welcoming the crowd of friends and associates who gathered under the tent. She spoke to the enduring indigenous cultures of both the Haudenosaunee people and that of the Bazou dynasty in place since the 7th century. Hers was a welcome to the fathers and mothers whose children were taken from their land as well as to the Oneidas, upon whose very lands the event occurred, was once taken from them.

In her welcome, Harris Lockwood spoke of a day when those children of the New World would be able to establish a durable culture of self- government perhaps a blend of the two.

The Linwood Place Community Garden, replete with the natural aromas of mint, cilantro, sage, and basil, was idyllic, a perfect setting on a perfect Upstate New York summer day. The Linwood Place garden was transformed from community garden to a temporary royal court.

A large tent was set up in the southeast portion of the Garden with forty chairs facing the King’s seating arrangement. At the front of the tent a temporary throne was set-up for the King and Queen. The American flag and the New York State flag were the backdrops.

A podium was placed next to the audio-video, multimedia screen for a PowerPoint presentation about The Bazou Kingdom, all  part of an efficient, coordinated effort to present the King of Bazou to the honored guest in attendance. 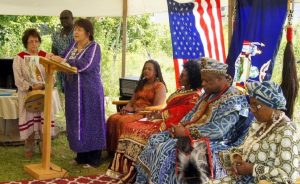 The lush, thriving raised beds, full of bounty and promise, were in clear view for His Majesty and his wife, Martha, to behold. Several days of painstaking preparation led up to this moment. Dianne Shenandoah, Faith-keeper and Wanda Wood, Clan Mother of  the Wolf Clan of The Oneida Nation, opened with a traditional invocation and ritual song to set a spirit of reverence for gathered guests.

One could imagine the Spirits and Ancestors  of these ‘tribes’ engaged in an unseen, celestial dance as two distinct indigenous cultures were joined through song and prayer. A mood of reverence  swept over attendees as local songstress, Astena Smith, followed with the Negro National Anthem, Lift Every Voice and Sing. Bumblebees moved about the flowers undisturbed as the crowd responded with emotional applause.

Jill Koch, president of Utica Rotary was there to present a gift of 50 dozen pencils to return to the children of Bazou for their studies. Sadly, only two local politicians took note of this significant event and made an appearance.

Kimberly Tobin, from the office of Assemblyman Anthony Brindisi represented. Another welcomed guest, Joe Griffo, bucking the frustrating trend of indifference, showed up and spoke at length, giving a warm welcome to Utica’s royal visitor. It was a shameful example of the City of Utica and Oneida County’s inability to identify with or honor any culture outside of the traditional European/Anglo standard, regardless of all of their claims of welcoming diversity.

FTG graciously stepped in and filled the void, more than compensating for the traditional, cultural shortcomings of homogeneous Upstate New York.

“I have visited (America) many times, but this is the first time I have truly been greeted like I am in my country- I felt at home,” the King was heard to say.  Augustin, ambassador of the King shared, “He said it was the first time he felt at home in the United States,” clearly putting emphasis on the gracious reception and atmosphere created by FTG. 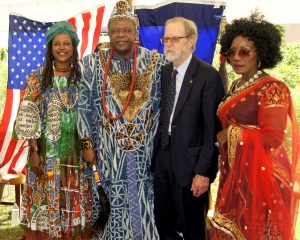 “The King said he was able to connect with The Spirit in the Garden,” said Augustin, highlighting the metaphysical aspect of leadership that is at the core of this Christian culture. “Every garden has a spirit.”

The Country of Cameroon has a lot to offer and King Vincent made it clear to those assembled he intends to modernize his country and bring in expertise to show his people that innovation is a way of life. He also made it clear that acculturation is to be resisted. His mission is to restore traditional ways and to welcome those who have left, no matter how long ago, back to their homeland. During his remarks, he suggested Black Americans have their DNA tested.

The king says of expatriates, ” You cannot like your shoes better than your feet.” Meaning that you can enjoy a better life in another country, but if your people are still struggling to get clean water, education, and end hunger then you are still in trouble.

The Bazou Kingdom is located in the highlands of Cameroon, roughly a 1000 ft. above sea level. It consists of 63 villages, each ruled by a Chief who reports to the King. It’s population roughly 15,000 people. Bazou is abundant in water and within its 250 square km is a productive agricultural tradition. The main agricultural products are coffee, cocoa, corn, peanuts, cassava, pineapple, pepper, okra, sweet potatoes, palm oil, avocado, and mango.

There is also livestock: goats, poultry, pigs, and rabbits dwell among the diverse wildlife that lives within the region. Cameroon boasts the African continent’s second highest concentration of biodiversity. The Cross River Gorilla (endangered) pythons, elephants, and lions all dwell within its borders. 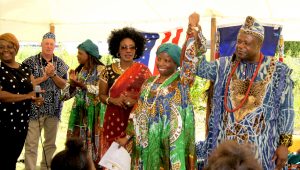 “I want to provide technology and education to our people,” the King said (in French) through his interpreter, Guy (pronounced Gee). He continued, “The country is rich in so many ways but we are also very poor in others,” he said. The emphasis was on technology and management of resources. 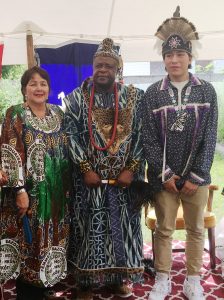 He also made a short wish list for anyone willing to help. At the top of the list is medical equipment, first-aid materials to assist with the medical care in the singular District Hospital and five integrated health centers. Jack Buschman gathered a small truckload of medical supplies for their return.

King Vincent requests expertise and assistance in developing safe drinking water methods for at least 30 villages with high population. The needs are not limited to municipal populations. There is also need for modern farming tools for plowing and fertilizer. Supplies for understocked libraries, schools and general support for the vulnerable, younger generations through sponsorship and scholarships are also welcome.

Although the country is abundant in water it has had little success when it comes to sanitary storage and proper distribution. Water borne diseases still affect the populace at a disproportionate rate. Paul Rayhill of Nirvana Water has been contacted as an industry resource for future water works in Cameroon.

The King is determined to guide his people into the world of the 21st century. His four-day stay consisted of a tour of The Waterville sewage Treatment Plant, where, modern methods are used to turn human waste and sewage into fertilizer. He took a tour of local farms, like MKJ Farms and was met by Clinton Tractor owner, John Calidonna to learn about state-of-the-art farming equipment.

Augustin explained, “We do everything by hand. There are not enough resources produced to sell our food outside of Bazou. If we had equipment we could sell our food as a commodity and send our children to be educated which would make life better for everyone.”

FTG is poised to help make a positive impact through its efficient, raised bed gardening system. This system would provide every village with the means to minimize the waste of valuable resources, secure and protect animal waste from the biosystem and maximize yield and growth of valuable food stuffs.

King Vincent mentioned that their Fair Trade efforts fail when it comes to breaking into the international coffee market. Frank Elias of Utica Coffee was contacted as a future resource in this developing industry. 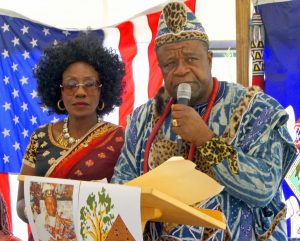 It will take a period of time to measure the full impact of this trip. The connections made will grow and information gathered will be put to use. The plans for the future of Bazou are equally exciting. FTG may even provide hands on instruction in Cameroon, ushering in an era of innovation that will blur the limited boundaries of each Kingdom and bring modernity to this colorful cultural paradise.

To view more details and photos regarding this story and other Utica Phoenix news please visit uticaphoenix.net