A man hospitalized with mysterious seizures was diagnosed with a 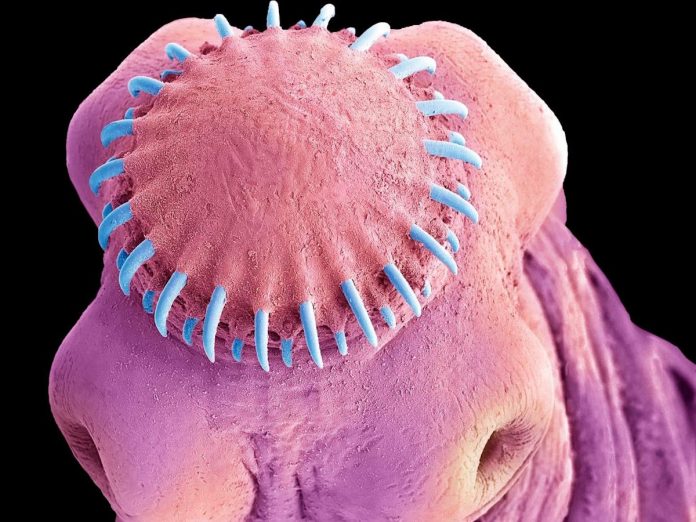 Eating undercooked pork or being in unsanitary conditions can cause a parasitic infection of the pork tapeworm (Taenia solium). Ingested eggs hatch into larvae that travel through the bloodstream into the muscles or to the brainSTEVE GSCHMEISSNER/SCIENCE PHOTO LIBRARY/Getty Images

Doctors who treated a man who was hospitalized with seizures, disorientation and strange behavior said tapeworms had been living in his brain for years undetected, according to a case study published November 11 in the New England Journal of Medicine.

The 38-year-old man appeared to be in perfect health, until one night when his wife awoke to find him on the floor, shaking and “speaking gibberish,” according to the case report.

He was hospitalized, and doctors treated him for a seizure, noting that he was unresponsive to questions and seemed to be involuntarily gazing up towards the ceiling.

The man had no previous history of illness, no medication or drug use, and no recent symptoms until the seizures, his family told doctors.

The medical team at Massachusetts General Hospital eventually diagnosed the patient with cysticercosis, otherwise known as a tapeworm infection, which was confirmed via brain scans and blood testing.

Tapeworm infections can go undetected for years and can travel to the brain, causing seizures

Two decades earlier, the patient had emigrated from a rural area in Guatemala, where parasite-related illness is endemic, according to the case study.

Parasites from eating undercooked and unsanitary meat or fish can be passed from person to person if someone with an infection doesn’t wash their hands after using the bathroom. Tiny parasite eggs in the person’s poop can then be spread to other surfaces, or even food, and ingested by someone else, passing the worm along.

Symptoms of infection include digestive upset, weight loss, and abdominal pain. But the parasite doesn’t necessarily stay in your digestive system. The critters can also migrate throughout the body, into the muscle, and to the brain via the bloodstream, potentially causing a range of symptoms.

For instance, in a similar case of parasite-related seizures from 2019, a 43-year-old man in China complained of headaches, leading to the discovery of hundreds of tapeworms inside his brain. The symptoms, including seizures, started about a month after dining on a pork hot pot he “felt unsure about.”

In one 2020 case study, a woman complained of a sore throat, and doctors found an inch-long parasitic roundworm in her tonsil, likely caused by sashimi she ate five days prior.

However, it can also take years for symptoms to appear, since the parasites’ eggs can lie in wait inside the body without prompting an immune response, Ars Technica reported.

Parasites can be dangerous, but infections are uncommon in the US

In regions where parasites are more common, including parts of Asia and Central America, 10%-50% of epilepsy cases are related to tapeworm infections in the brain, according to research. Tapeworms specifically can also be found in some parts of America, including Texas, Southern California, and New York City, according to the case study.

Most of us don’t need to worry about walking around with parasites, Dr. Kyle Staller, gastroenterologist at Massachusetts General Hospital (who was not involved with the case study), previously told Insider.

But fear of parasites has driven a trend toward viral “cleanses,” products that claim to de-worm the body to heal everything from brain fog to weight problems.

“The idea that there’s a living organism inside us robbing us of nutrition and health is something people can latch onto and fear is a selling point,” Staller said.

The best way to prevent tapeworms is to cook meat, especially pork, to at least 145 to 160 degrees Fahrenheit, according to the CDC. Thoroughly wash your hands and any plates or utensils after contact with raw meat. Always wash your hands after using the bathroom.