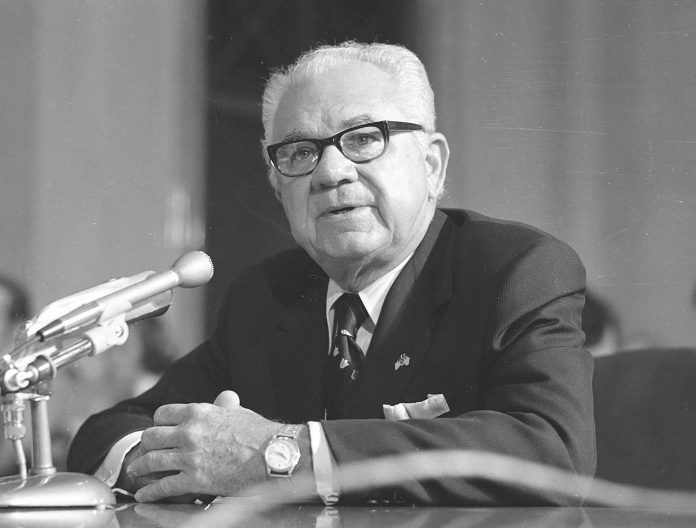 Leon Jaworski was an American attorney and law professor, who served as the second special prosecutor during the Watergate scandal. He was appointed to that position on November 1, 1978, soon after the Saturday Night Massacre of October 19,20, 1973.  That resulted in the dismissal of his predecessor, Archibald Cox.

As the successor to Archibald Cox, Mr. Jaworski assumed the special prosecutor’s post amid the suspicion and uncertainty engendered by the so-called Saturday Night Massacre, which  culminated in Cox’s dismissal confronting a variety of difficulties and impediments, Mr. Jawjorski brought many of Nixon’s top aides to trial for Watergate connected crimes, and supervised the presentation to a grand jury of evidence regarded as impeachment investigation.

Leon Jaworski was born in Waco in Central Texas on September 19, 1905.  His mother, Marie, was an Austrian immigrant and his father, Joseph Jaworski, was a Polish immigrant who was an Evangelical minister. Leon studied at night by the light of oil lamps. He was a champion debater at Waco High School and graduated from Baylor Law School,  receiving his Master’s Degree in Law at the George Washington University Law School, Washington, D.C. in 1925.

He became the youngest person ever admitted to the Texas Bar.  After starting out defending bootleggers during prohibition in 1931, he joined the Houston law firm that became Fulbright and Jaworski, one of the largest law firms in the United States.  Jaworski served as president of both the Texas Bar Association (1962, 1963) and the American Bar Association (1971,1972)  prior to his appointment as special prosecutor.  He was also the president of the Houston Chamber of Commerce in 1960 and served on many corporate and civic boards.

Jaworski prosecuted the Johannes Kunze’s murder trial, where five German prisoners of war were accused of beating a fellow prisoner to death for being a “traitor”.  After the war Jaworski served as a war crimes prosecutor in Germany.  He was involved in a case where eleven German civilians were accused of murdering six American airmen forced down over Germany in the Ruesselsheim Massacre.  Leon Jaworski served as a prosecutor at the Nuremberg Trials of Nazi war criminals.  None of this, however, could match the drama of unraveling the tangle of the Watergate Affair.

He was a good friend to Texan Lyndon Baines Johnson, whom he successfully represented in a 1960 lawsuit filed to prevent Johnson from campaigning for the U.S  Senate against Republican John Tower at the same time that Johnson was running for Vice President of the United States on the John F. Kennedy ticket.  Jaworski did not always support Democratic candidates.  He supported Richard Nixon and voted for him twice , contributed to George H.W. Bush in his campaign for the presidency in 1980, and after Bush conceded the nomination, he became treasurer of “Democrats for Reagan” during the 1980 general election campaign.

By the 1970s Jaworski had also built his law firm into the largest in the country.  His firm was the first law firm in the Houston area to hire Jews, blacks, and women.

After the firing of Cox, Jaworski understood the politically tenuous nature of his job as a special prosecutor.  His position required that he collect evidence in the Watergate Case, present it to grand juries, and prosecute wrongdoing, but not appear partisan or vindictive.  Jaworski’s judicious temperament and patient amassing of evidence insulated him from any partisan charges.

To demonstrate his independence from the White House, which appointed him, Jaworski retained Cox’s staff of lawyers and broadened the scope of their investigations to include not only events connected to the Watergate break-in and cover-up, but also illegal contributions to the Nixon election campaign.

Ultimately, like Cox, Jaworski found himself at odds with the Nixon Administration over the Watergate tapes, which Jawoski sought to review for evidence, but which Nixon refused to surrender. As had Cox, Jaworski rejected the Nixon administration’s claims to executive privilege.  The compromise proposals were that  the White House provide transcripts of the tapes instead of the tapes themselves.  In the spring of 1974 he subpoenaed the administration for sixty-four tapes, but the White House refused to comply.  Jaworski took his case to the Supreme Court.

On the 24th of July, 1974 the Supreme Court ruled, eight to zero, that Nixon must turn over the tapes, including the famous 23rd of June 1972 “smoking  gun” tape, which proved that Nixon personally ordered his subordinates to obstruct justice.  Sixteen days later Nixon became the first president in American history to resign the office.

Jaworski had not taken the job as special prosecutor in order to bring down Nixon.  He operated with deference to and respect for the president, suggesting, for example, a compromise regarding the delivery of Watergate tapes, which Nixon rejected.  He also refused to expand his powers beyond their limits, failing, while Nixon was still a sitting president, to indict Nixon for obstruction of justice, because he believed it to be beyond his power.

Jaworski believed that it was a constitutional requirement that Congress prosecute the president. With Nixon’s resignation, that dilemma was lifted, and Jaworski moved to prosecute Nixon as he had his fellow Watergate conspirators.  President Ford’s pardon of Nixon ended his efforts.  On the 25th of October, 1974 Jaworski returned to Houston.  Under the third special Watergate prosecutor, Henry S. Ruth, Jr., White House officials John Mitchell, John Ehrlichman, H. R. Haldeman, and Robert Mardian were found guilty of conspiracy to obstruct justice.

Judge John Sirica sentenced Mitchell, Haldeman, and Ehrlichman to two and a half to eight years in prison.  Mardian was sentenced to ten months to three years.  Twenty-seven corporate executives and lawyers were found guilty of campaign violations, but only three received prison sentences.  Jaworski had not taken an active role in the prosecutions.

Jaworski’s greatest fame came from his tenure as Watergate special prosecutor, when he assumed leadership of a protracted contest with President Nixon to secure evidence for the trial of former senior administration officials on charges relating to the Watergate cover-up.  Jaworski’s predecessor as special prosecutor, Archibald Cox, initially believed that only Nixon’s aides had committed misconduct.

Because of testimony from Nixon’s deputy assistant Alexander Butterfield, Cox learned that Nixon had discussed the Watergate cover-up with the accused on numerous occasions and that these conversations had been recorded by the White House taping system.

This discovery caused Cox to subpoena tapes of sixty-four presidential conversations as evidence for the upcoming criminal trial, but Nixon refused to release them, citing executive privilege. Nixon offered Cox what became known as the Stennis Compromises. Instead of supplying the tapes, he would supply Cox with transcripts of the recordings, subject to Nixon’s discretion, and allow one senator to listen to the recordings and verify the transcripts’ accuracy.  Cox rejected the compromise, whereupon Nixon fired Cox in the Saturday Night Massacre.

Under extreme  criticism for the firing, Nixon appointed Jaworski to replace Cox.  Jaworski subsequently subpoenaed sixty-four taped conversations.  Nixon appealed on two grounds:  first that the office of special prosecutor did not have the right to sue the office of the president, and second, that the requested materials were privileged presidential conversations.  Aware that an important constitutional issue was at stake, and unwilling to wait an longer, Jaowrski asked the Supreme Court to take the case  directly, by passing the court of appeals.

On July 24, 1974 the Supreme Court ruled that the special prosecutor did have the right to sue the president and that the “generalized assertion of {executive] privilege must yield  to the demonstrated, specific need for evidence in a pending criminal trial.”  Nixon was forced to give the unedited tapes to Jaworski, including the so-called “smoking gun” tape which included a compromising discussion of June23, 1972.  The president’s remaining support waned, and he resigned on August 9, 1974.

In addition to writing three books in the years after his historic Watergate assignment, he again practiced law privately in Houston, Texas.  Leon Jaworski, key Watergate prosecutor, died of an apparent heart attack at the age of 77 on December 9, 1982, while chopping wood at the Circle J. Ranch near Wimberley in Hays County, Texas.  His wife died in 1999. They had two daughters.  Leon Jaworski was morally offended by the president’s evasions and lies, and his legal victory reassured Americans that no one is above the law.