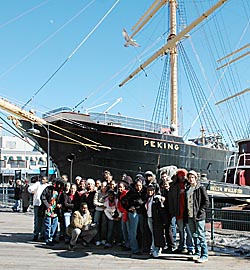 During the course of a Zoom call of the Steering Committee of College Community Partnership for Police Reform, it became apparent to the participants that there were systemic racial problems in the Black community that would not be remedied by police reform. Problems such as housing, health, employment and education.  Being on the call, I responded that I couldn’t do anything about a lot of those problems but that the Study Buddy Club could be the answer for the education piece.

There was a quiet sense of acknowledgment and an immediate across the board agreement from all colleges representatives to participate in a Poly College SBC program.

The SBC is a transformative pairing of on campus high functioning college students full of altruism, empathy and idealism who volunteer to tutor and mentor self- selecting at-risk, academically challenged middle school and high school students who want to achieve and do better in school. It began in 2002 as I was approached by the late Councilman Bill Philips to intervene in the problem of Utica’s ‘girl gangs.’

At that time there were two warring gangs of Black girls, about 13-16 years old, angry, defiant, marauding and at the time rampaging throughout the city. The administration and police department were all distraught with grown men having to deal with these misguided, violent and dangerous teenage adolescent girls.

My husband Steve and I had just launched For The Good, Inc. with a dormant 501c3 and I had the attention of what we then called, the Blue Ribbon Panel of Black activists like Susan Woods, Jerome and Tyra McKinsey, Geniene Harvey and others. I asked Susan Woods and a few other women to work with me to engage these girls, which we did. After bringing the two warring factions together over the course of a few months it became clear that they in fact had plenty in common including, fatherless homes, poverty, hunger and poor educations.

This was when I was reminded of a program I joined when I was a Kirkland College student called the Utica Tutorial Project. It was a few hours in the evening for 4th graders on the Hamilton Campus and had been back in the 70’s.

In the early 80’s I was Community Organizing Specialist for the  City of Utica and  had bumped into a few former kids as grownups. They told me how the importance of those moments ended up shaping their young lives and restructuring what could have been their realities. I figured if a couple of hours ended up being so powerful then full afternoons directed towards academics and tutoring in their most difficult subjects for high schoolers would be transformative.

Understanding their need for a healthy meal and positive socialization we added a meal and a structured activities providing a new vision for these girls which took the program over the top. As the goal was to dismantle the girl gangs we added a tennis program where one gang became Team Venus and the other Team Serena and a writing program called Girls Write Girls Unite but, the enduring and most impactful aspect has been the Study Buddy Club.

The Study Buddy Club began in late 2002 when a busload of at-risk teens, low income mostly girls, arrived at Hamilton College with their homework in hand and since then literally hundreds of inner city boys and girls have benefitted, even flowered through this program.

Unfortunately, and egregiously, no funding source has yet to embrace this valuable program to insure its continuation. However, the recognition of its impact an importance by the College Community Partnership for Police Reform has changed all of that. College Prof. Veronica Tichenor of SUNYPoly and Prof. Frank Anechiarico of Hamilton College have been aware of the SBC for many years as Tichenor was at Hamilton at the time and helped set up the original program and Anechiarico and I have known each other since were both students on the campus.

For The Good has been committed to and sacrificed to maintain the SBC all of these years. This past year through the pandemic was grueling but there was a bright light when the interest of some Americorps  workers arose for their own children.  It put the SBC in the midst of the identified as in need, at risk and low income population.

Since that time, I had the opportunity to explain the benefits of the program to Mr. Robert Calli, Director of the Utica Municipal Housing Authority, now known as People First. Mr. Calli has agreed to collaborate with For The Good and the Study Buddy Club at all of their housing site locations. Mr. Calli  has also agreed to commit the full resources of the Americorps workers participate in the development as well.

On participation in the development of this new initiative Mr. Calli remarks…

“We have a responsibility to eliminate barriers to create endless opportunities and this program serves as an integral component of said equation.”

On participation in the development of this new initiative Prof. Anechiarico remarks…

“Study Buddies is an amazing community resource that is taking an important step forward with its connection to SUNY Poly. Congratulations!”

The staff and board of directors of For The Good are thrilled with inclusion of the participating partners and the future of education for the at-risk, underserved and poorly educated youth of our community. Stay tuned!