The UK government has been caught using sophisticated psychological manipulation to steer the public into accepting their COVID dictates. Promoting fear and confusion are their main tools.

As far back as 2010 the UK government was using their Behavioural Insights Team to influence politics and policy. This is a team of psychologists using applied behavioral psychology. The clear admission of this is in a document called Mindspace. This document boasts, “citizens may not fully realize that their behavior is being changed –or, at least, how it is being changed.”

Starting in January of 2020 the UK Scientific Advisory Group for Emergencies (SAGE) began meeting in regard to COVID. Dr. David Halpern was present at a March 23rd SAGE meeting. He is the Chief Executive of the Behavioural Insights Team and co-author of the 96-page report MINDSPACE: Influencing behaviour through public policy.

The day before this meeting a paper was prepared by the SAGE’s behavioural science sub-group titled “Options for increasing adherence to social distancing measures.” The paper emphasizes the need to cause fear in those who won’t respond to their messaging. It states, “The perceived level of personal threat needs to be increased among those who are complacent, using hard-hitting emotional messaging.” The paper concludes that using media to increase the sense of personal threat is highly acceptable. 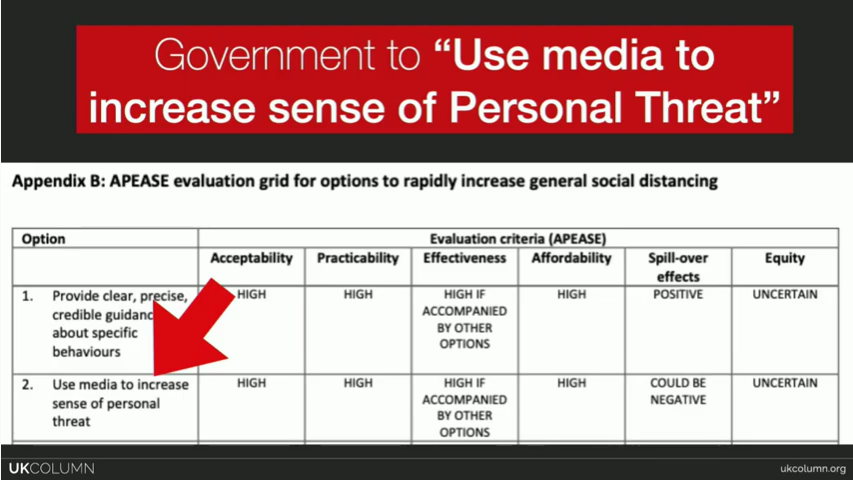 Under the heading, Coercion, they encourage communities to police one another using social approval or disapproval to make people follow the dictates of the government. They did admit this was a risky tactic as they said it “needs to be carefully managed.” The concern being that someone saying “You should wear a mask!”, could provoke a violent exchange.

A newly released book by Laura Dodsworth, “A State of Fear: How the UK Government Weaponised Fear During the Covid-19 Pandemic,” documents how members of the Behavioural Science sub-group regret their ‘unethical’ and ‘totalitarian’ tactics.

One member of this group said they were “stunned by the weaponization of behavioural psychology” during the pandemic, and that “psychologists didn’t seem to notice when it stopped being altruistic and became manipulative. They have too much power and it intoxicates them”.

Dodsworth’s book, claims at least 10 different government departments in the U.K. are working with “behavioral insights teams” to manipulate the public.

Among these 10 departments is the Home Office’s Research, Information and Communications Unit (RICU), which, according to Dodsworth, “attempts to covertly engineer the thoughts of people” by providing support to bodies seen by the public as “grassroots” organizations.

An additional psychological technique is to constantly change the ‘rules.’ This constant uncertainty causes people stress and anxiety and confusion. In regard to applied psychology, people who are in a distressed, confused state are very susceptible to further messages and instructions.

Dodsworth states in an article with The Telegraph, “It’s not just a genie that has been let out the bottle. It’s like we’ve unleashed a Hydra and you can keep chopping its head off, but they keep employing more of these behavioral scientists throughout different government departments. It’s very much how the Government now does business. It’s the business of fear … “

It is not only the UK that is using psychological manipulation. The German government was also caught engaging. Their document referred to as the Panic Paper states the need to shift the focus of the COVID conversation away from the percent of people dying from infection. “In order to achieve the desired shock effect, the concrete effects of an infection on human society must be clarified.”

They state that, an example of how to achieve this shock effect is to note that if children contract the disease from neighbors and then transmit it they will feel responsible for the tortured deaths of their parents and grandparents because they didn’t wash their hands.

In the US, some academics were able to detect media bias toward fear. In a paper titled, Why is all COVID-19 news bad news?, the authors identify stories of increasing COVID-19 cases outnumber stories of decreasing cases by a factor of 5.5 even during periods when new cases are declining.

An article from Mercola explains more about the contagion of emotions:

When scared or stressed, humans produce chemosignals, and while you may not consciously recognize the smell of fear or stress, it can have a subconscious impact, making you feel afraid or stressed too.

Humans also tend to mimic the feelings of those around us, and this is yet another way through which an emotion can spread like wildfire through a community or an entire nation — for better or worse. Behavioral psychologists refer to this as “emotional contagion,” and it works both positive and negative emotions.

One way to protect against this fear mongering is to stay away from “news reports” and to socialize in situations that nurture joy and reverence.