Broadway Utica
HomeMust ReadTroublemaking: A Mohawk Tradition and the Heroes of Alcatraz
Must Read

Troublemaking: A Mohawk Tradition and the Heroes of Alcatraz 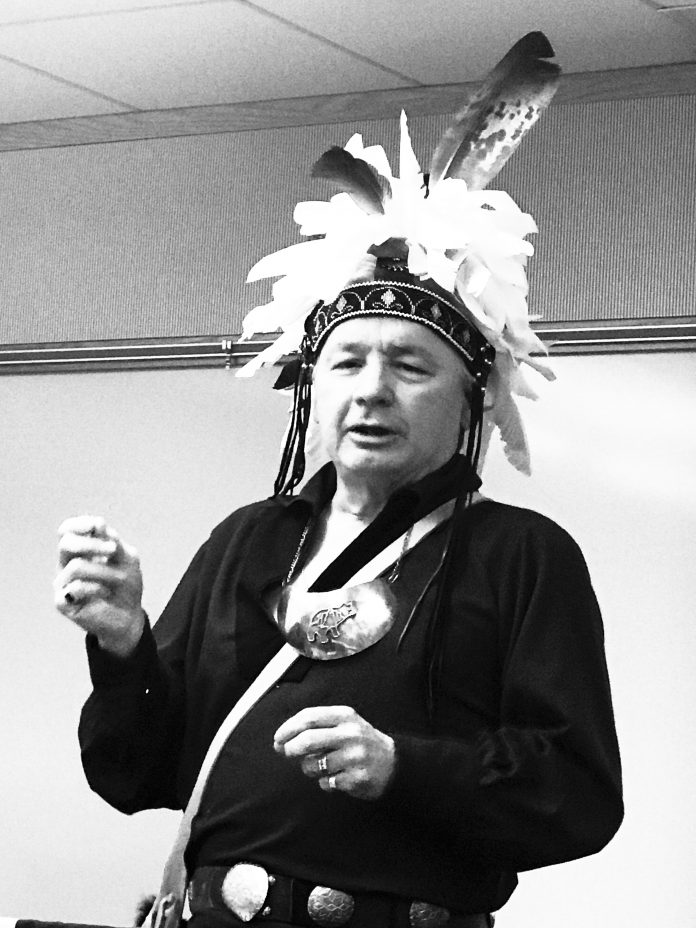 One of the more admirable traits of the Mohawk people is the ability to shake things up, to disturb the complacent, to agitate, confront and demand.

It was no mere chance that Skennenrahowi, the Peacemaker, decided to enter Mohawk territory first as they had the most formidable reputation, one based on cruelty, vengeance and plain meanness. His reasoning was that if he could shift the Mohawks away from being artists of war to proponents of peace he could effect similar changes in any people, at any time.

Skennenrahowi succeeded but not before he proved to a doubtful people that he was, in truth, a messenger from the Creator. But he did not extinguish Mohawk characteristics such as their innate intelligence, their physical toughness, their willingness to speak out when moved by an issue or to take leadership in the face of adversity. The Mohawks then, and for most of our history, refused to be passive even in times of danger.

In the past century we have many examples of Mohawks who refused to bend to the forces of oppression. These people were not complacent with the ways things were but risked liberty, home security and their personal safety to take a stand in defense of what they believed to be right.

In the first decades of the 20th century Akwesasne in particular was mired in factionalism. The border was set, the elected councils in place and the traditional customs called the “longhouse” virtually invisible. The Nation council leaders had been jailed and one of their supporters killed by the RCMP for resisting the imposition of the Indian Act system. Despite repeated attempts to get rid of the St. Regis tribal council New York actively intervened and kept the “trustees” in place.

Yet the idea, the dream, of a united Mohawk people at Akwesasne would not fade. A new era of activism began after World  War I when Iroquois leaders from New York to Wisconsin sought o assert the right to self determination. From the Oneidas of Wisconsin came Laura Cornelius Kellogg, one of the founders of the Society of American Indians, a group of Natives from across the United States who shared their common experiences and adopted a pro-unity strategy. Ms. Cornelius-Kellogg wanted the revival of the Iroquois Confederacy as a recognized entity in the world and the return of lands stolen by New York State. She was the first person to travel to Europe using an Iroquois passport and she came to Akwesasne to help the Mohawks regain control over the territory under the jurisdiction of the Mohawk Nation Council.

Grand councils were held at Akwesasne where Ms. Cornelius Kellogg spoke with passion. She helped win the Paul Diabo case in the US Supreme Court which recognized the aboriginal right to cross the border and thereby saved the economic lives of thousands of Mohawks. She was a real troublemaker as seen by the US and tribal council supporters. She gave inspiration to the people to reject the Indian Reorganization Act of 1934 which in turn led the clanmothers of the Nation to block the entrance of the old tribal building on St. Regis Road and order the tribal council to disband. Those brave ladies were certainly troublemakers.

As were the families who built the longhouse on Route 37 at great personal risk. At that time a family could have lost their jobs, been evicted from their homes and stripped of their enrolment status if they were seen to have taken part in the ancient rituals. But a group of young people refused to concede to the accusation that they were “dancing with the devil” and renewed the ceremonies.

Among these brave ones, these troublemakers, were Alec Gray, Joe Mitchell, Ross and Madeline David, Mike Boots and Ray Fadden. It was Mr. Fadden who added to this fire when he took Mohawk history into the schools and made those stories into a source of pride. He raised a generation of young Mohawks to extract the wisdom and teachings of their grandparents and restore dignity to a people. Among his compatriots was Ernest Benedict, one of the first Mohawk college graduates, the editor of the first Mohawk newspaper and a man who was jailed because he defied the US and said it had no right to draft Mohawks into World War II. Ernie did serve with distinction but he never compromised on his ideals.

Another contemporary was Phillip Cook. Although he remained a Christian throughout his life he was an advocate for the restoration of the traditional government. He was elected as one of the three trustees for the Tribal Council but knew the people wanted that “elected” system out. So after receiving almost universal support he, and the other trustees, disbanded the Tribe in 1948 only to have New York State hold an off territory election and using the threat of the New York State Police return the tribe to power.

In the 1950’s we had the leadership of Frank Thomas-Standing Arrow. He had been taught by his elders that the Mohawk people had never sold their ancestral lands despite the fraudulent Seven Nations of Canada and Joseph Brant “treaties”. Rather than wait for litigation he acted and in 1957 moved his family and other Mohawks to the Schoharie Creek at its confluence with the Mohawk River west of Amsterdam. He held on for two years until New York once again sent in the troopers to burn their longhouse and dismantle the community.

But Standing Arrow was right, direct assertion of Mohawk sovereignty was a possibility. His troublemaking inspired young Mohawks such as Tom Porter to become advocates for traditional knowledge and a group of Kahnawakeronons to act on that knowledge in May of 1974 when they moved to secure a camp at Eagle Bay, NY and give birth to Ganienkeh. What Standing Arrow did was to show the viability of the longhouse in political matters. A Nation Council could govern and was seen as leading the move towards unifying Akwesasne.

Among the people affected by Standing Arrow was Mike Kanentakeron Mitchell. He made serious trouble when he and his friends blocked traffic on Kawehnoke to protest the imposition of import duties on goods taken from the “US” to Mohawk homes north of the border. What Mr.Mitchell did on December 1968 ignited a national movement to assert aboriginal rights across Canada.

From that incident, which received worldwide attention, came the publication Akwesasne Notes, the most influential Native news journal in history, And the White Roots of Peace, the travel troupe which was the most effective advocate for Native sovereignty. Both were sanctioned by the Mohawk Nation Council and made Akwesasne the beacon for the the rights of indigenous people worldwide. Now that was epic troublemaking.

Then came the takeover at Alcatraz in November, 1969. The Native peoples of the US were ready for the spark which would ignite the movement and it came from Richard Oakes, the son of Irene Foote (my grandmother’s niece) and Arthur Oakes, both Akwesasnoronons. Richard was schooled in Mohawk nationalism by the White Roots when the troupe visited San Francisco in early 1968. He promoted the ideas of Standing Arrow, Ray Fadden and Ernie Benedict-his edicts read at Alcatraz were absolutely pro-Native sovereignty and when he swam to that island on November 9, in 50 degree water through 250 yards of lethal currents he initiated what we all have benefited from: the principles of Native self determination and the use of direct action to assert those rights. Oakes did not wait for the courts, he did not engage in useless, confidential negotiations with government officials, he would not be coerced by those who wanted to take a more “reasonable” approach to Native rights. He saw the dangers of appeasement so he stripped off his shirt, plunged into the San Francisco Bay and did a perfect Akwesasne backstroke to Alcatraz. Joining Oakes in that epic swim were Joe Bill, Ross Harden, Jim Vaughn and Jerry Hatch.

And so began a truly historic trouble making with international ramifications.

Richard Thariwasatse Oakes would be murdered in 1972 in his 30th year but his legacy is wide reaching. When he was shot and killed a national caravan was organized to go to Washington and demand his death be investigated by the federal government. This caravan, originally named after Oakes, would become the Trail of Broken Treaties and arrive in DC in later October, 1972 on the eve of the US national elections. The headquarters of the Bureau of Indian Affairs (an agency then led by Akwesasne Mohawk Louis Bruce) was occupied and ransacked (some say by government agents). After leaving the BIA with money given by the Richard Nixon reelection campaign many of the occupiers would rally to the call for support at Pine Ridge, South Dakota in February, 1973. With the American Indian Movement in prominence the standoff at Wounded Knee, SD would last for over 100 days and become the longest armed standoff between the US and Native peoples in the 20th century.

There would be other incidents of trouble at Akwesasne and elsewhere across both Canada and the US. To respond to this the Americans would pass new legislation including the 1988  National Indian Gaming Act, a law impossible to conceive of without Native activism with an economic slant. If those troublemakers had not been brave enough to take their stands we would all still be under the heavy hand of Indian agents, hostile courts and oppressive state and federal legislatures.

We should all be grateful for those Native patriots even as we look for those in this generation to show the same leadership, to show the same courage and unbending will as their troublemaking grandparents. With Oakes at Alcatraz were the original group: LaNada Means War Jack, Joe Bill, David Leach, John Whitefox, Ross Harden, Jim Vaughn, Linda Arayando, Bernell Blindman, Kay Many Horse, John Virgil, John Martell, Fred Shelton, Rick Evening, Jerry Hatch and Al Miller with prime organizer Adam Fortunate Eagle and spokesperson John Trudell.  Peter Blue Cloud Aroniawenrate Williams of Kahnawake would become the poet and chronicler of Alcatraz.

Other events and laws which came about directly because of the new activism coming from Alcatraz:

– the enactment of the American Indian Freedom of Religion Act

– the passage of the Indian Education Act

t- he enactment of the American Indian Child Welfare Act

– the expansion of Indian Health Services

the enactment of the Indian Self Determination law

– the founding of the Indian Water Rights Office

– the passage of the Native Graves Protection and Repatriation Act

– the passage of the Indian Gaming Act

– the founding of the National Museum of the American Indian

And yet there is still no formal recognition of Richard Oakes at Akwesasne. Perhaps on the 50th anniversary of the swim to Alcatraz we can do something tangible to give him and his compatriots the honour they deserve.