Kimberlee Morton is a rape survivor.

Kimberlee is also responsible for Tennessee House bill 2311. It was signed into Law on May 29th, 2012 in the state of Tennessee. The bill was established to ensure that rapist serve 100% of their time sentenced. The law is known as Kimberlee’ Law and Ms. Morton would like to enact it nationwide.

Her assailant was charged with Criminal Attempted murder in the 1st degree and Aggravated rape. He pled guilty the day before the trial. Both charges ran concurrently as they occurred the same day but they were both worthy of 15-year sentences. He was sentenced to fifteen years without parole.

Sadly, her assailant was released early on “good behavior” after serving only twelve years but the journey there has led Kimberlee to a Governor, congressional representatives, parole boards, and the broadcast and print media. She continues to champion justice for rape victims.

“This is a Law that can benefit all fifty States,” says Kimberlee, “I am hoping Senator Gillibrand who is an advocate for victim rights, will stand for justice for anyone who is a victim of Aggravated Rape and assure that their assailant will serve 100% of their time.

Hers has been a long and painful struggle beginning when she was just 20 years ago in 1998.Kimberlee Morton was born and raised in Memphis Tennessee.  Since she was a little girl, modeling and acting were goals in her life. An athletic and beautiful child, she dreamed of gliding down the runways of New York City, Beverly Hills, Paris, France and acting alongside some of Hollywood’s biggest and brightest stars. Kimberlee was an average student, acted in school plays and enjoyed being the ‘class clown.’ 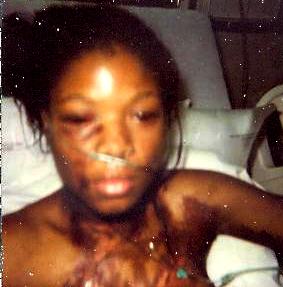 But she dropped out of high school in the 12th grade she was so determined to pursue her career. Working at a warehouse to support herself, she developed a portfolio and began her training and auditioning for modeling and acting roles. She had gotten her first calls to audition from modeling agencies in Atlanta the week before the attack.  Hers would be a dream deferred.

On November 19, 1998, she was brutally attacked and raped by a trusted friend and left for dead.

On that morning she had stayed home from work because she didn’t feel well. She was sleeping when Carlos, a friend of three years, tapped on her window “This was a man who referred to me as his little sister. I treated him like a big brother.”

She let him in. This “big brother” well over 6 feet and over 250lbs. then grabbed the petite young woman by the neck, dragged her to her bedroom and savagely raped her. He then stabbed her several times in the neck and side with a butcher knife and left her bleeding, dying, with the knife sticking in her side. He returned later to throw bleach over her body.

After the assault, Kimberlee somehow managed to drag herself off of the bed and stumbled to a neighbor’s house where 911 was called.

Kimberlee clung to life in the ICU for a week…then with chemical burns over fifty percent of her body, she was moved to the burn unit.  The next weeks and months were excruciating. The pain was so bad that anesthesia was required for her body to be bathed. Then there was the physical therapy in order for her to be able to move normally again as the burned and damaged skin had stiffened her body. She describes it as the most difficult time in her life.

Kimberlee says today, “As horrible as it was, the attack changed my life. It changed my direction, brought me closer to God and gave me a greater sense of purpose in life. I know today that my purpose is to be a voice for people who have been victimized and to serve as an inspiration to them.

It took two years for her to recover from the attack. The physical damage as well as the psychological damage that people don’t see but, she carried on with her life. Along her way, she joined the Job Corps with her cousin, graduated from an adult high school, went on to college in Mississippi.

Despite her scars, she went to John Casablanca modeling agency in Memphis for a year. When she left for New York City on spring break she loved it so much she decided to move to New York State. She enrolled in MVCC and graduated from Herkimer College with a degree in Human Services. She currently works as a nanny and has lived in Utica on and off for 16 years.

“Now I want to bring this legislation to our great country. It’s not right that this man only served 12 of the 15 years he was sentenced to serve. And really it should have been 30 years. Since he has been out he has already assaulted two other women.

“It’s very frustrating when I’ve heard some people around here say that men who commit this sort of offense should be castrated because they can’t control their testosterone.

“I’ve been in touch with Assemblyman Anthony Brindisi who says that we don’t need legislation like that in New York.

According to a letter to Ms. Morton in 2012 Brindisi wrote. “Current New York State law states that if someone commits a predatory sexual assault with physical injury and has a prior rape conviction, a situation comparable to “Kimberlee’s Law”, they would get an indeterminate life sentence with no eligibility for release nor any available good time.  Even if a person is convicted of predatory sexual assault as a first offense, he would be sentenced to a life sentence with no opportunity for good-time or early release.

John Stemen, the spokesman for Assemblyman Anthony Brindisi, added, “Anthony was raised by three older sisters, and as the father of a young daughter, he wholeheartedly is committed to the tough sentencing of rapists. He supports Ms. Morton’s important advocacy on this issue, and in New York, we have laws on the books that go further than her proposal. As always, Anthony will continue fighting and working with community members to strengthen laws that punish those who would commit such a terrible crime.”

Kimberlee states that “I have been in touch with Senator Kirsten Gillibrand’s attorney for the past year. But recently have heard nothing.”

The Utica Phoenix reached out to Senator Gillibrand’s off recently and has not received a response.

“Unless you’ve been a victim or know someone who has you can’t imagine how devastating and psychologically damaging an attack like this really is. This man left me for dead with a knife sticking out of my side. It is a miracle from God that I am here today to carry on this effort.

“I’ve appeared on the Maury Show, the Montel Show, The Biography Channel, and Oprah’s Network. Even Jet magazine has acknowledged my accomplishments but what I really want to see is men who commit crimes like these to be put away so they can’t hurt anyone again.

“I am so happy that the Utica Phoenix is bringing my fight to the people. If you think this is something worth helping me with, or if you or someone you care about has been a victim of sexual assault, please contact your elected representatives on the State and Federal level and let them know Kimberlee’s Law is worth fighting for.”