The Wilcor Story: The Corrigan Family Utica Merchants since 1887 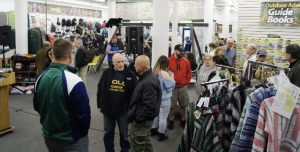 Over one hundred inquisitive and concerned citizens attended the open house of the world-class showrooms of Wilcor International, Inc. on April 26th. There they experienced a first-hand, behind the scenes look at this highly successful, multi-generational home-grown Utica business. It has been operated by the Corrigan family for nearly 90 years.

Wilcor International is in the footprint of the proposed MVHS new hospital and as such its existence is being intentionally and irrevocably threatened by the proposed development.
This was the second in the ongoing series of open houses to showcase those vibrant and at-risk businesses, many of which are “homegrown” and have flourished right in Utica. Those for-profit businesses have combined total of over 500 years of collective pay supporting city, county, school, state and federal taxes. While others may be not-for-profit, they have functioned to aid the underserved populous of the inner city.

From Oneida County, An Illustrated History:
“An ability to evolve in an ever-changing market has allowed Wilcor International, Inc. has grown to be the number one supplier to the vacation industry. Wilcor offers the largest variety of products from one source, supplying a dazzling array of nearly 6000 products to retail businesses through the nation. As times have changed over the decades, the family business has maintained its commitment to quality and old-fashioned values.”
The current Wilcor business can trace its roots back to the early 1930’s when William J. Corrigan (grandfather of the current owners) founded a wholesale business in a warehouse at 720 Columbia Street in Utica (ironically, the original St. Elizabeth’s Hospital building). Even prior to this, the Corrigan family was involved in such enterprises as restaurants, a funeral home and grocery store businesses back in Ireland. William J’s father, Joseph, ran J. Corrigan Bros. Groceries and Provisions on Arthur Street in Utica starting in 1887; in 1921, he started a distribution business that included meat, paper, bags, napkins, bath tissue, shoe polish, light bulbs and office supplies, among other things.

William J. Corrigan and Sons supplied a variety of items to local stores, bars, and restaurants, humbly starting with (of all things) shoelaces. William was a hard-working soul who imparted his values to his son, William I. (Bill). Signs in the warehouse proclaimed, “A place for everything, and everything in its place.” Bill was an industrious teenager who delivered packages for his father, was the number one newspaper delivery boy the city, and was a consummate “entertainer.” When Bill eventually had a family and took over the business from his father, he taught his six children the values of the business, of innovation, and his hard-working, old-fashioned values. He attended the Utica School of Commerce; the firm later benefitted from free market research developed by the Small Business Institute. Through die-hard determination and new ideas, Bill and his wife Eleanor managed to turn around the Corrigan Company from near oblivion when they purchased the business after the death of William L. Corrigan in 1966.

Bill Corrigan was and still is, a beloved character, well-known in Utica. He moved the business to its current location at 333 Lafayette Street in 1981. He was known for his humor that found its way on the back of the Corrigan delivery trucks: “Crime does not pay, and neither does this business.” Bill developed the beloved “Your Store,” which specialized in costumes that were particularly popular around Halloween; in fact, during the early eighties, Bill could be found standing outside the store in full Halloween regalia encouraging customers to come inside (with great success!).

Bill has always been known as a consummate entertainer – a salesman, a showman, a community-minded individual with a heart of gold He would take time out of his busy schedule to delight audiences at the local Lion’s Club, nursing homes, and facilities for person with mental challenges (among many others) with his performances.
Bill encouraged his children to get involved with the business and to expand. He would take the family on trips to Maine and may have been an innovator in the “staycation” concept when he set up tents in the family’s backyard to make staying home feel more like a vacation. His children would be “bribed” to work hard on Saturdays with the promise of a “free breakfast” at Roger’s Coffee Shop on Varick Street.

The Corrigan family had always been attracted to the outdoors, so it was a natural progression for the business to evolve into Wilcor (for William Corrigan, of course). The business product line expanded into camp supplies, bug sprays, and a myriad of other outdoor paraphernalia in 1979.

The company moved forward to where they are today by hard work, insightful vision, and energetic innovation. Now, Bill’s two daughters (Susan and Karen) and four sons (Shawn, Dennis, Bill, and David) have taken this remarkable company to new heights and a very bright future. Each brings to the table a unique set of business and marketing skills that make Wilcor a glowing success story, a business that any city would be undeniably proud to call its own.

Today, Wilcor International remains a positive company in Downtown Utica that boasts a 10 -15% annual growth, counts over 7000 retailers as clients with both brick and mortar and online stores. Customers from as far away as Mexico, Canada, and China do their purchasing here. During a given year, over 1000 retailers make the trek to Utica to make their selections for their stores for the upcoming season. These individuals will stay in Utica hotels, eat at Utica restaurants, and appreciate those things that make Utica unique.

The heart, the soul, and the energy of the business embodied in their second-to-none showroom located at 333 Lafayette Street in Utica. The Corrigan family, now working on its fourth generation of Utica-based entrepreneurs, has very deep roots in, boundless affection for, and dedication to Utica. Furthermore, not only do they not want to move from the downtown that they love but they cannot afford the cost of relocation based on the paltry sum that the MVHS is offering to purchase their building/business.
Wilcor International is among several locally nurtured and homegrown businesses that have weathered the worst of times in the Columbia-Lafayette neighborhood and stand to lose it all if this hospital is built in the currently-proposed footprint.

Corrigan family spokesman, and fifth generation entrepreneur, Shawn Corrigan, reminds officials, “Our family did not interfere with anyone else’s business in Utica in any way. We bought and maintained and improved our many properties and paid our taxes over the decades. We did what we were supposed to do as community-minded individuals and business entrepreneurs. Now we are so-called “standing in the way.”
“The position of Utica and Oneida County’s so-called ‘leaders,’ smacks of dictatorship. Dictators have no place in a democratic society. They act upon their own agendas. They are not interested in discussions, not interested in other better opportunities, they have a single focus, accomplishing their agenda and their personal goals.
“The goals of the taxpayers of Oneida County and the City of Utica are not in the forefront of this decision. The downtown of a small city is built upon vibrancy, fun, cultural opportunities, like entertainment, group activities even entrepreneurship.

“No matter what anyone says, this is not a “done deal.” The choice to sell or not sell our 333 Lafayette Street, Wilcor International showroom is ours. Our choice of location, building, development of that property must be to our benefit. And all costs have to be met in order for Wilcor, the Corrigan family, to choose to move.

“Based upon Utica’s current one-sided regime it may well not be the best business decision for Wilcor to remain here. However, as We the People change the dynamics of Utica, we can set the stage for the next 5 generations of Corrigan’s to call Utica home.”

“The Corrigan family invites our fellow business and property owners to stand up and let their voices be heard in the retaking and rebuilding of the best business corridor remaining in Downtown Utica. “ Corrigan reminds them that, “We all made a choice to come to this location. Let’s make the choice to make this the best walkable Downtown corridor in Utica. We are ready to hear your voices. Email me at shawn@wilcor.net”

Stations of the Cross “A Beautiful Observance”