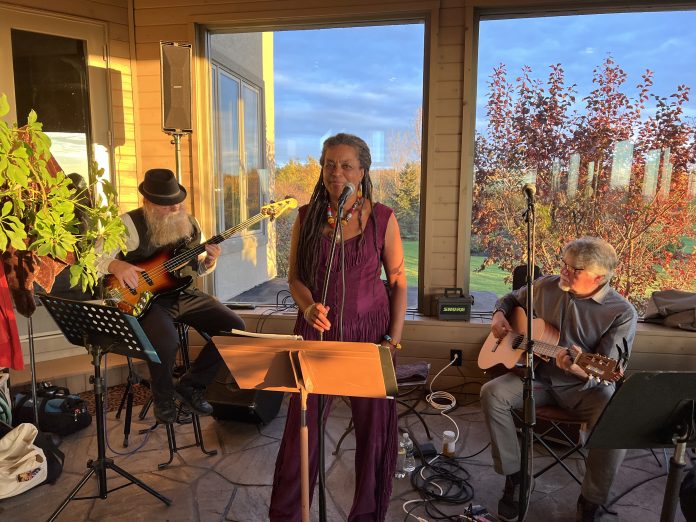 Utica is known for having a thriving community of gifted musicians. We have everything from Pop bands to folk singers to Jazz musicians and artists who use music in interdisciplinary arts. We even have our very own band specializing in music for children and families, the Hummingbirds. Founded in the summer of 2021, The Hummingbirds are Cassandra Harris-Lockwood, John Kelsey, John Handzel, and Theresa Mancuso.

The Hummingbirds’ founder, Cassandra Harris-Lockwood, formed the band when John Handzel and John Kelsey agreed to play music with her.

“I recognized that there was so little fun and appropriate music for children being offered that if I could get together with some high caliber musicians we could bring some really good music to children and make a name for ourselves,” Harris-Lockwood said. “ Raffi has been an inspiration for my songs for children. Making songs with substance, good messages and teaching things on top of melodies that won’t make parents crazy if they have to hear them ten times over.”

She described some of her background in playing for children and families.

“At one point I was a regular at the Children’s Museum playing Music for Munchkins years ago. I had been playing for nursing home residents for some time,” Harris-Lockwood noted. “I love to write songs and make music so it is very satisfying working on tunes, collaborating and creating something beautiful out of nothing with other musicians.”
She described The Hummingbirds as a culmination of all of the music she’s played over her years as an artist.

“I play and sing all kinds of music,” Harris-Lockwood said. “I sing in the choir at St. Joe’s St. Pat’s. I’ve dabbled for a bit with the Easy Money Big Band and I usually sing Jazz for Juneteenth and Christmas music. But I started out as a folk singer inspired by Judy Collins, Buffy St. Marie and Odetta. I grew up in the ‘60s Motown and rock music explosion and sang all of that stuff but not professionally. Once I had a baby I started singing children’s music. I sang and played guitar from his preschool through to middle school.”

She credits Utica’s first Jazz musicians, Skippy and Fred Mitchell, as early influences and supporters, and noted a wide variety of musical genres and artists as helping to shape her music. But Harris-Lockwood is especially thankful for one music legend the world sadly lost in 2021.

“I have to say that Joanne Shenandoah was my favorite artist,” she said. “Being loved, encouraged and included in song, collaboration and on stage by a Grammy and Nammy Award winning worldwide superstar is a once in a lifetime experience. Joanne made all of that possible for me. I miss her greatly.”

Going forward into 2022 and beyond, Harris-Lockwood most looks forward to “making more music with the finest musicians I’ve had the pleasure to play with, and making people happy with our sound.”

John Handzel plays electric bass and upright bass. He started playing at age fourteen. Handzel is largely self-taught, but he took a few lessons from Doc Woods and Joe Ferlo.
“I consider myself a blues player with benefits,” Handzel said, noting that he plays rock, blues, country, pop, funk, and a little jazz.He listens to all types of music and is influenced by everything, even sounds in nature. Musically, his influences are also varied.

Handzel joined the Hummingbirds in late summer, 2021. He first joined the band for a chance to play with his longtime friend, John Kelsey. He was also curious about Cassandra’s music.

Handzel would find that her music was indeed interesting and unique, as they are the only area band devoted to children and family music. Handzel hopes to inspire some young audience members the way he was inspired at a young age.

“I remember watching a band rehearsal in a garage when I was about 11 years old. I thought it seemed like fun. I would like to spark that interest into some more young people,” he said. “I’m looking forward to recording some of Cassandra’s original songs and doing some more live shows.”

Theresa Mancuso is currently learning to play piano, but she has been singing since she was three years old.

“My father was my vocal coach my whole life with the exception of one month of Opera training with Pasquale Caputo when I was 17 years-old,” she said. “By the time I had reached Pasquale my father helped me to develop a six octave range. Pasquale wanted to take me to Europe and used to say to me ‘Teresina, if you could hear what I hear.’ Sadly, though, my mother passed away shortly thereafter and I did not go to Europe.”
Although she was not able to travel to study further, Mancuso was able to begin her professional singing career at an early age.

“I truly started doing weddings as a child. I sang for my first wedding, at just 8 years old. The bride’s name was Lenore Creo. I sang “ Evergreen “by Barbara Streisand and “Sunrise Sunset’’ from “Fiddler on the Roof” with the Bride’s Father, Gabe.

Mancuso currently sings all types of music, from Opera to country to rock to gospel. Mancuso praises Jovita Bernard, her piano teacher, for being “tolerant of my lack of skills.” But skills, along with a great gift of natural talent, have never been in short supply when it came to Mancuso’s singing. Utica residents likely already know her through her work with Steve Falvo and the Easy Money Big Band, her other current group. She has also sung with contemporary Christian and Gospel choirs.

In her work with the Hummingbirds, Mancuso most looks forward to the opportunity to develop her showmanship skills while having fun with her bandmates and the audience.
She notes that singing with them is a bit different than her work with larger groups.
“In large groups with more than two singers, if you are having an off moment you are covered by the other voices. Imperfection goes unnoticed. In a small group it makes for a more vulnerable experience and connection with the audience. Regarding the Hummingbirds it’s imperative to learn how to work and rely on each other with precision. Practice is a must.”

Mancuso also encourages any other young people, who may cite the Hummingbirds as an inspiration for their own singing career someday, to follow their dreams.
“Do it!” She said, “There is enough room on the stage for everyone. Don’t let anyone tell you that you can’t.”

John Kelsey plays guitar and sings backing vocals for the band. He has been playing music steadily since 1965. Although he is mostly self-taught, he took lessons when he started, with someone he describes as “a great teacher.” He plays a wide variety of contemporary music, and a little classical, and describes his influences as equally diverse, ranging from Jackson Browne to Aretha Franklin.

Kelsey’s recent and current work is as varied as one might expect from such a background.
“I do duos with local artists like Berkley educated guitarist and singer, John Hutson from New Hartford and singer Chad Plantz from Rome,” he said. “Chad and I add another guitarist for some trio work. It’s a high energy guitar act with strong lead vocals. I worked with multi-Sammy Award singer Isreal Hagan in his Rhythm & Blues band, “Stroke” in the Syracuse area. He’s an iconic singer, writer and bassist. It was a high-energy Soul/Funk/ R&B band that played large stage shows, events and local club dates. I resigned in September on good terms with the band. I had a wonderful ten year ride with those guys,” he added, calling them “great players and excellent people.”

“I also do an all instrumental guitar solo for receptions, events, dinner hour, cocktail parties, wedding ceremonies and museum openings,” Kelsey further noted.
Working with Cassandra Harris-Lockwood on another project led to the formation of The Hummingbirds.

“I had worked with Cassandra Harris Lockwood with a gospel/soul group for the Juneteenth Festival in June. It was a last minute gig for me because they were without a guitarist and I happened to be available. We got together after and started doing some guitar and vocal material,” Kelsey explained. In the coming year, he is most looking forward to playing “gratifying shows for appreciative audiences.” Should any young audience members feel inspired to play their own music, Kelsey offers the following advice.

“I would say that while playing is a lot of fun, it’s important to do the work first,” he reminded aspiring young musicians. “ You’re only as good as the time you put into it. I’ve been playing and performing for a generation and I still have to put the time in to live up to the caliber of musicianship I like to perform. It’s important to develop good chemistry with your bandmates. Remember kids, work first – fun second. And the better you’re prepared, the more fun you’ll have!”

Keep reading The Utica Phoenix in print and online for details about upcoming Hummingbirds events. A December 2021 Christmas concert was sadly postponed due to a Covid-19 outbreak in the county, but plans are underway for a special “Christmas in July” performance featuring these talented and dedicated musicians. Look for information about this special event, and many more exciting projects and performances by The Hummingbirds in the coming months.