The Blackhawks are forced to face their reckoning, 11 years 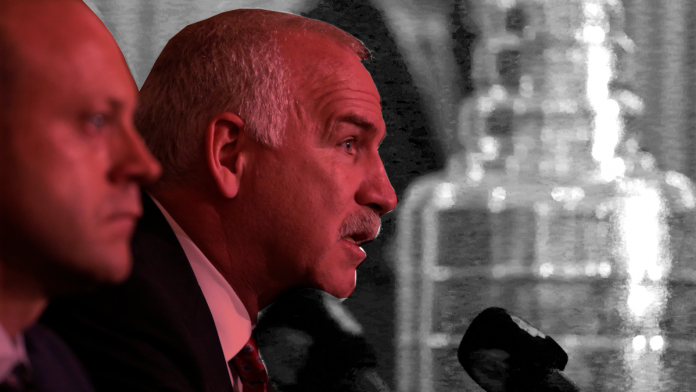 Former Chicago Blachawks coach Joel Quenneville, right, has a lot to answer for in his role in covering up sexual assault allegations from 2010. GM Stan Bowman, left, resigned on Tuesday.Image: AP

The details are always worse than you can imagine, even if the overall arc of the story is exactly what we all expected. And so it proved as the Chicago Blackhawks released the findings of their internal investigation into how the organization handled accusations of sexual assault and harrassment by one of their coaches toward one of their players.

If you’ve been a sports fan for any length of time, this was only confirmation of what you had a fairly strong suspicion of. The report states that Hawks brass — their president John McDonough, their GM Stan Bowman, their assistant GM Al McIsaac, assistant GM Kevin Chevyldayoff, and coach Joel Quenneville — were told of the accusations an hour or so after the Hawks had clinched the Western Conference to appear in the 2010 Stanley Cup Finals:

Accounts of the meeting vary significantly, and the participants had limited recollections of the details of the meeting. All of the participants recalled being informed that there was an incident between Aldrich and John Doe involving an unwelcome sexual advance, but, for the most part, the participants reported that they only learned about the incident at a high level—that Aldrich, a coach, tried to “get under the sheets” with John Doe, a player. Gary recalled telling everyone in the meeting what he said John Doe told him—that Aldrich was pressuring John Doe to have sex with him and that Aldrich told John Doe that if John Doe did not submit to Aldrich’s advances, he could harm John Doe’s career. None of the participants recalled being told about the type of clearly non-consensual sexual conduct that is described by John Doe in his lawsuit or was described during John Doe’s interview with us. Bowman recalled that during the meeting, McDonough and Quenneville made comments about the challenge of getting to the Stanley Cup Finals and a desire to focus on the team and the playoffs. Several years later, MacIsaac, in discussing the situation between Aldrich and John Doe with another Blackhawks employee, stated that McDonough did not want any negative publicity during the Stanley Cup Finals.

And though the Hawks themselves belatedly (heartbreakingly and engagingly belatedly) took responsibility for all of this, the report certainly didn’t hesitate to bus-toss two people who are no longer with the team. That is McDonough and Quenneville, who are portrayed as the ring-leaders in squashing the accusations until after the playoff run was over:

The report’s headline is that the Hawks, collectively, didn’t do a damn thing for three weeks when notified of sexual assault and harassment, until after their Cup run was over. That was the priority, even if it meant keeping a monster on the payroll. It was only then that McDonough informed Human Resources of the accusations, and then HR gave Aldrich an ultimatum that there would be an investigation or he would resign. Aldrich chose the latter, which allowed the Hawks to put a lid on this for what they seemingly had hoped would be forever.

Those three weeks allowed Aldrich to harass another member of the organization, an intern. It allowed Aldrich to be part of the celebrations, get a day with the Cup, and be at the banner-raising. Had an investigation taken place promptly, thoroughly, and publicly at the time, it is likely that Aldrich would have not been in a position to assault anyone else after, as he did.

The Hawks preserved their on-ice success over all that.

However late, and however underwhelming it feels now, the Hawks did clean house today. Bowman resigned before he could get fired, though how he thought this would end any other way is beyond all of us. Bowman shortly resigned his position as GM of Team USA as well. That didn’t mean Bowman didn’t have time to release the most cowardly, snakiest, “Well I told my boss!”-ish statement possible, perhaps in a pathetic attempt to save his USA hockey duties. McIsaac has also been booted. The Hawks have said anyone who was around in 2010 in the front office will also be removed. They have instructed their lawyers to find a settlement with the player and the other survivor of Aldrich’s atrocities, both of whom are currently suing the Hawks. It should have happened years ago, none of these people should work in hockey again, but it’s just about the only action the Hawks could take at this moment in time.

It will reach farther than that. By the time you read this, Quenneville will be facing hard questions or will be out of a job himself, portrayed in that meeting as something of a ring-leader of the cover-up in protection of the Cup run. Cheveldayoff, currently GM of the Winnipeg Jets, will surely, and rightly, face pointed questions as well.
The NHL has fined the Hawks $2 million, which might sound like a lot at first blush until you remember they fined the Devils $3 million and stripped draft picks for signing Ilya Kovalchuk to a cap-circumventing contract. Which was the worse action?

For anyone who has been close to the Hawks the past decade as a fan or reporter, the only surprise is the depth, but not the action. This is an organization that never hesitated to pump its on-ice success as proof of their overall genius, even though the organization in place didn’t have all that much to do with that success, nor did it do anything a first-year business student couldn’t have put together. It used the “new toy” excitement the city had for the Hawks’ bursting onto the scene, and the lack of any scrutiny that came with it, to celebrate themselves for years, and using all of it to squash, or divert attention from: the Garrett Ross case; or the rape accusations against Patrick Kane (no charges were ultimately filed); or the controversy about their name and logo, or a host of other things that have long been whispered about here in Chicago.

If nothing else, and it is far too little, the era of the Hawks celebrating being born on third as an organization has been thoroughly burned to the ground. And those who perpetrated it will find it very hard to find work in hockey again. It does not come close to making this whole, nor will any monetary settlement appease what this player and the other survivors of Aldrich have had to endure.

But as I was sure it would end up nothing, I guess I find the slightest bit of relief in that they couldn’t just go with their signature one move: pointing to their banners getting covered with more and more dust, and pretending everything was okay because of those.