Steelers still can win with Ben Roethlisberger at QB, but 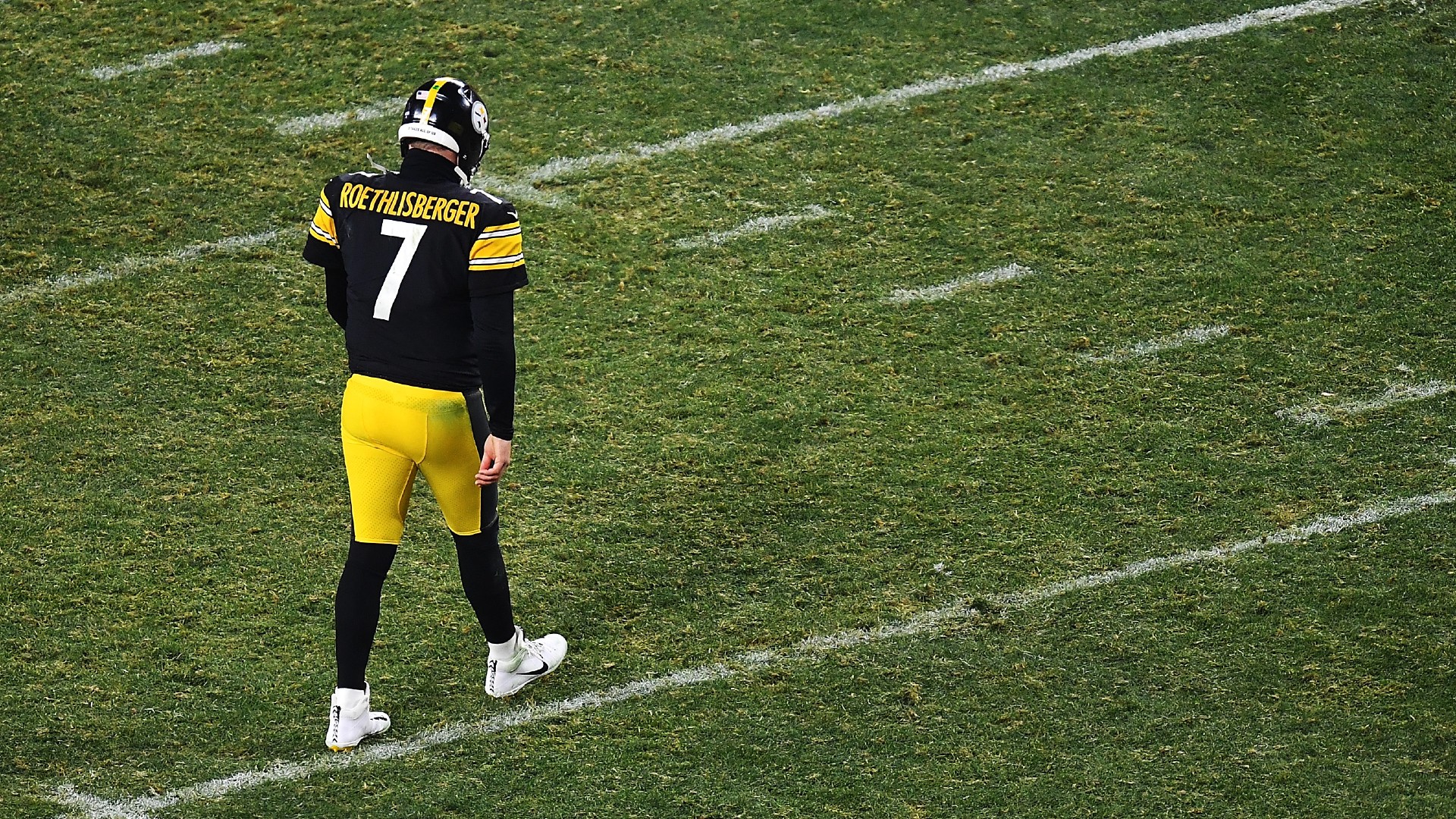 The conclusion arrived not on the horrid interception that even the beneficiary could not comprehend, nor on the laughable decision to throw a flare pass to a running back on fourth-and-10 from the opponent’s 11-yard-line. These were calamitous, certainly, and not what anyone would expect from a quarterback who ranks among the game’s greats in so many ways. Even the best make mistakes, sometimes ridiculous in the extreme.

The best also make plays, though, when they are available to be made and essential to their team’s success. This is where Ben Roethlisberger has come to be most deficient. Those moments too rarely happen now, almost never, and this was painfully evident with the Steelers trailing by 17 points in the third quarter against the Bengals but still abundant time to paper over that deficit.

WEEK 4 PICKS: Straight up | Against the spread

On third down from the Bengals’ 24, after two incomplete passes, the Steelers had second-year wideout Chase Claypool on the left side, where he sprinted hard until he met defensive resistance that left him no choice but to turn into a post route. There was no defensive help available between Claypool and the end zone at that moment. Claypool was as alone as Tom Hanks in “Cast Away.”

No, wait, Claypool was more alone — because at least Hanks had a ball.

As Claypool sliced toward the goalpost, Roethlisberger lobbed a pass toward the end zone corner, where no one stood. The ball landed and bounced along the Heinz Field grass. A miscommunication, is what the TV analysts call it. There have been a few of those for the Steelers in 2021, and most often the assumption is one of the young receivers botched it. This one, though, seemed entirely by design — the Bengals’ design. Claypool was turned inside because the Bengals knew Roethlisberger wouldn’t throw there. He rarely does, anymore.

And that’s the moment when the truth became inescapable: He no longer can win a game for the Steelers.

If the defense is healthy and dominant (who knows when that returns?) and if the offensive line is blocking reasonably well (not likely anytime soon), the Steelers can win with him. They no longer win because of him. And it’s occasionally possible that his name will be written all over a disappointing defeat.

“Ben Roethlisberger cannot be the catalyst of the Steelers taking over a game,” analyst Chris Carter of DKPittsburghSports.com told Sporting News. “He can be part of it. People who are saying his arm’s gone — I think that’s bull. He definitely has the physical ability to play quarterback. I think the problem is, he’s 39 years old and he’s not making NFL veteran reads and decisions on the field.”

Roethlisberger was poor enough in Sunday’s 24-10 loss to the Bengals that coach Mike Tomlin was asked in a news conference Tuesday whether any consideration was given to benching his quarterback during that game.

RIVERA: Steelers were one of NFL’s biggest Week 3 losers

There are heat charts that will show you how ice-cold the intermediate and deep middle are for the Steelers’ passing game. Tomlin wasn’t asked as specifically about that issue as he might have been, but did say, “It might not have anything to do with what’s going on downfield, it might have to do with the game circumstances or what’s going on up front. Nothing happens in a vacuum on a football field.”

Carter told SN that there have been open receivers in the middle of the field at various points in the Steelers’ first three games, and that passes to that area in those circumstances would help relieve congestion near the line of scrimmage that has made it so difficult for the team’s attack to be functional.

“He’s not hitting any of them,” Carter said. “Everyone’s picking on the offensive line because they are bad. But we knew they were going to be bad going into the season. … I’ve said a million times: Expect this offensive line to see progress by Week 8. But I’ve also said there are plenty of guys out there, like Aaron Rodgers, who have had bad offensive lines and they mitigate it. Why? Because they know where everyone’s going to be, they coordinate and they make things happen. Ben isn’t doing that right now. To me, that’s the biggest problem here.”

This is not what anyone had hoped would be possible when Roethlisberger took a significant paycut to return for his 18th season. This may be a result of too much hope infecting the Steelers’ offensive plans.

They hoped offensive tackle Zach Banner would recover rapidly from the ACL he tore last year, that right tackle Chuks Okorafor could move comfortably to the left side, that rookie Kendrick Green would be a sufficient replacement at center, that veteran Pro Bowler David DeCastro would recover from an injury-plagued 2020 season, that assistant offensive line coach Adrian Klemm would be an improvement on his boss if promoted to run the O-line and that quarterbacks coach Matt Canada would invigorate the unimaginative offense of his predecessor once installed as offensive coordinator. They have been 0-for-6 on wish fulfillment.

There are others who wish the Steelers had not followed this course. ESPN analyst Ryan Clark, a Super Bowl champion with the team in 2008, harangued the team for failing to concoct an adequate succession plan for the quarterback position. “The best teams are able to move right into the next quarterback,” Clark said.

Such as? Green Bay spent a 2020 first-round pick on Jordan Love and has gotten seven NFL passes out of him in 2.2 seasons. The truth is, it’s the worst teams that are able to move right into the next quarterback because they lose enough to pick high in the draft. The Steelers drafted in the top 10 once in the past 20 years, when they moved up to select linebacker Devin Bush at No. 10 overall. The next quarterback taken after Bush came four picks later, when Washington chose Dwayne Haskins at No. 14. He’s currently the Steelers’ third-string QB.

IYER: Steelers among playoff teams in trouble after Week 3

All of this is not on Roethlisberger. He too rarely has sufficient time to throw. The schemes in which the Steelers are aligned are more confusing to their own players than the defense, leading to multiple false-start and formation penalties. There have been far too many dropped passes — 10 against the Bengals — although those numbers were inflated by a late avalanche of bungling after the game had been decided.

Roethlisberger threw two interceptions that were turned into short-field scores by the Bengals. The first followed a pick by Steelers safety Terrell Edmunds, which set up the team just six yards short of midfield. They went backward from there thanks to a false-start penalty, and then Roethlisberger’s dreadful throw toward Claypool gave the ball right back.

That was turned into Cincinnati’s first touchdown. Their third came early in the second half, after Roethlisberger, on third-and-4 from his 31, threw on the run toward a receiver covered by three Bengals at once, who wound up laughing with each other about which was entitled to that interception.

“I don’t know about that one,” linebacker Logan Wilson said with a laugh. “He was scrambling, so I was going to go track him down and tackle him. He ended up just throwing it.”

Roethlisberger on the move is not the force he once was, which is like saying there now are better ways to listen to rock music than an AM radio. But he still is loathe to give up on a play and throw the ball away, leading to unnecessary punishment and yardage lost.

He still is trying to play the same old hits, but the band is too young to follow his lead as closely. And too often Roethlisberger is forgetting the lyrics to his favorite songs.