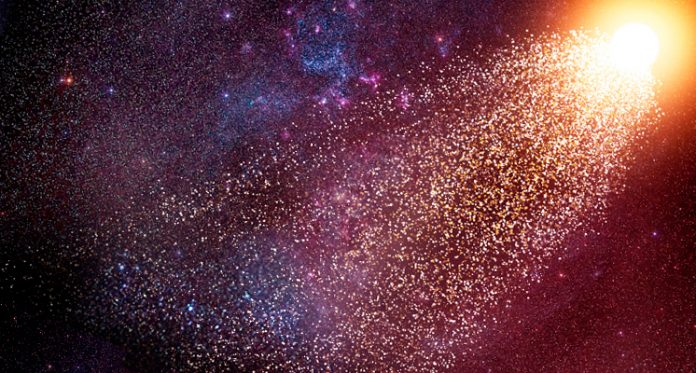 The Ohen:ton Karihwatehkwen is the Mohawk “Thanksgiving Address” said before any social, ceremonial or political gathering. It consists of 18 parts in which different elements of the universe are formally acknowledged and given gratitude. Among those elements are earth, plants, animals, winds, sun, moon and stars. For the stars the speaker will say the following:

We give thanks to the Stars who are spread across the sky like jewelry. We see them in the night helping the Moon to light the darkness and bringing dew to the gardens and growing things. When we travel at night they guide us home. With our minds gathered as one we send greetings and thanks to all the Stars.

The word for “stars” in Mohawk is o:tsis:tah (pronounced oh:jees:dah) which has the same root as “fire” o:tsi:se:re (pronounced Oh: jee:se:leh). Stars are the ultimate hearth fires of the Iroquois whose point of origin for the human species is traced to a specific cluster called the “Seven Dancers” or the Pleiades.

The first being is called Iotsitsisen (pronounced yo:ji;ji;sen), the Skywoman, who came from a place in the Pleiades region on a beam of light. Her name means “Mature Flower” and she was one of the other beings of light, the Skypeople. From her world she descended to earth, piercing a cloud-draped world which had become inundated by a great flood.
Skywoman brought with her the seeds of plants considered sacred by the Iroquois. These were strawberries (Fragaria vesca), Kohnniiohetsera (guh: ni;yoh:het:se:lah) a plant with curative powers for the heart and the berry consumed by the Iroquois upon death and along the celestial pathway back to the Seven Dancers. The second was tobacco (Nicotiana rustica), called ohiokwehonwhe (oh:yo:gwe:hohn:weh) and corn( zia mays): ohneste (oh:nes:teh). Together the three form critical components of Iroquois social, spiritual and ceremonial life.

Tobacco is of unique importance. It is grown generally by men and is not for casual use. The most potent, aromatic and sacred species is a broad-leafed, dark green plant which grew from the head of the Skywoman. Because of this, the Iroquois are able to use tobacco to communicate directly with the spirits once the dried leaves are put into a fire and with the appropriate words.

Rarely is this form of tobacco smoked directly as it is very pungent and has a harsh, raw taste. It may be tempered by mixing it with other plants. Strawberries came from the heart of the Skywoman while corn is said to have grown from her breasts, hence the Iroquois custom of planting in mounds.

The origin of all three plants can be traced to Central and South America. The Iroquois stories as to our origins also follow a similar path, migrating like the plants from the southwest to the northeast. The common beginning place is that region which is believed to be the point of entry by human beings into the western hemisphere, specifically the highlands of Central America.

The alignment of stars determines when the Iroquois plant and hold the most important of ceremonies, called Shatekohsehrhen (sha;de;goh:seh:lehn) or Midwinter. This seven day communal ritual of thanks giving marks the lengthening of days. It takes place in the Longhouse, the Iroquois ceremonial building, five days after the first new moon following the winter solstice and when the Pleiades are at a certain number of degrees above the eastern horizon.

Stars were also used in planting with their alignment determining when some seeds were placed into the soil. Stars also marked distance and time while serving as guides for travelers and hunters. Stars are also said to bring about the dew which moistens plants throughout the night and may determine the fate of human beings.

Upon the physical death of an individual, the spirit-ahtunhets (ah:duhn;hets) leaves the body and hovers nearby. A series of rituals are held to persuade the spirit to leave this earth and begin its journey back to the Skyworld.

Through a series of detachments, the soul follows the star path (Milky Way or Forked Path-Teiohaho’kon in Mohawk) a year-long venture during which it is escorted by spiritual guides. Once there the soul contributes its life experiences to the Divine Light and may opt to return to the earth to serve as a guardian o the living.

There are many star stories in the rich oral traditions of the Iroquois. There are tales of celestial bears, of young people ascending to the stars, of spirits who come from the heavens to give direction to the people. These night time fire stories continue as vital elements in contemporary Iroquois life.