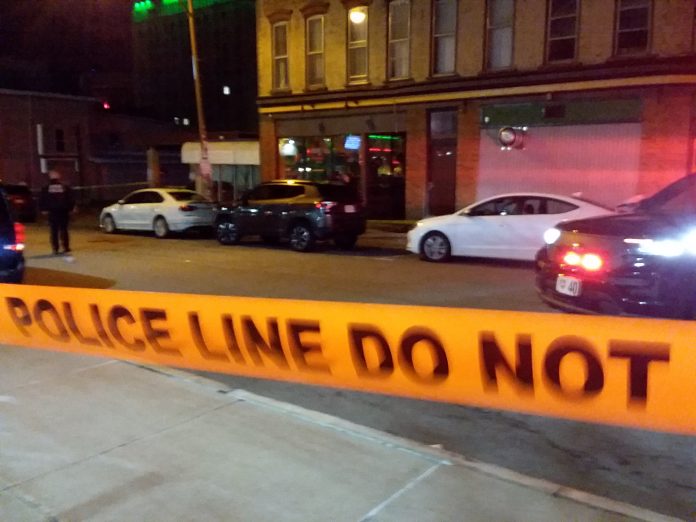 Last night at around 1:30AM, the intersection of Genesee and Devereux St was lit up by the flashing red lights of almost ten squad cars responding to a shooting at the bar formerly known as The Dev located on the corner of Devereux and Charlotte.

From the initial view of the scene, it’s clear that someone shot a semi automatic pistol multiple times at someone outside the bar, striking a parked van and also a victim who was taken by ambulance to Saint Elizabeth’s Medical Center. As of now, it is unknown if the victim survived, but a large amount of blood was spilled at the scene.
Local patrons within the bar were having a birthday party when they heard the shooting. When police came to secure the location, both the patrons and bar owner became irate and started several heated exchanges with the police. The on-scene UPD supervisor was asking for permission from the owner to walk through the bar and check the safety of everyone inside, however the owner denied this from behind his locked jail cell type screen door.
Eventually, the owner allowed the supervisor and one other officer to walk through the bar, which they did and found nothing of importance. Right after that, patrons began trying to leave the bar (an active crime scene) against the orders of the UPD. This lead to patrons and the owner getting in the faces of the UPD and then both sides shouting at each other. The alchohol, time of night, chilling temperature combined with the obvious stress of the scene to create some extremely volatile behavior.
The below video was taken by Eamon Handzel.
Once the tempers cooled down, UPD continued sweeping the area for clues until at least 3:00 AM. They have found spent shells and will probably find a projectile within the van, however it’s unclear if this evidence will help.
The UPD Public Information Officer stated this: “At 1:30 this morning, UPD was dispatched near the intersection of Charlotte Street and Devereux Street regarding a shooting investigation. Upon arrival, they located one male lying in the roadway suffering from a gunshot wound to the abdomen. He was immediately transported to Saint Elizabeth’s hospital where he remains in an unknown condition. At this time, we’ll remain on scene for the foreseeable future, processing the scene and attempting to gather any information we can. If you have any information regarding the shooting, please contact the major crimes division at (315) 223-3536.”
The PIO also confirmed that this shooting is much closer to Genesee street than all of the other recent shootings in the city, which raises the concern that the epidemic of shooting plaguing Utica may be growing and spreading.