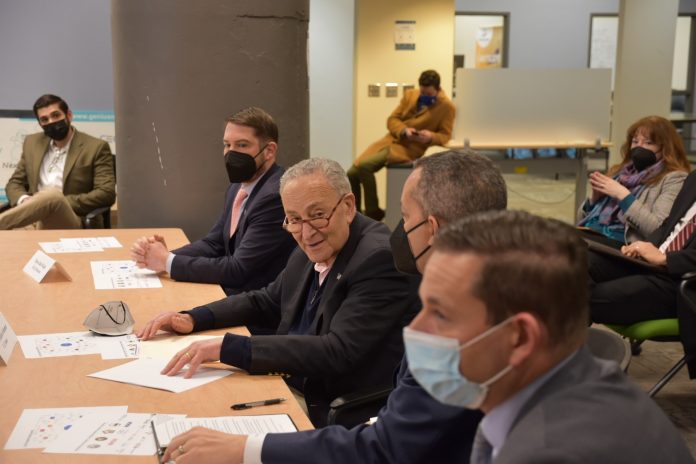 Last Month, Following A Personal Call, Letter, & Advocacy To Secretary Raimondo, Schumer Secured CNY & Mohawk Valley’s Spot On The Shortlist To Compete For Up To $100M Through The BBB Regional Challenge Competition; Schumer Doubles Down On Efforts & Brings Commerce Top Brass To Hear Directly From Local Leaders In Roundtable

Schumer To Commerce Department: Central New York & Mohawk Valley Are Primed To Recharge & Power The Future Of The U.S. Chip Industry & High Tech Fields– From Shovel Ready Sites And R&D Assets To A Topnotch Workforce –Region Is The Home Of The Future! 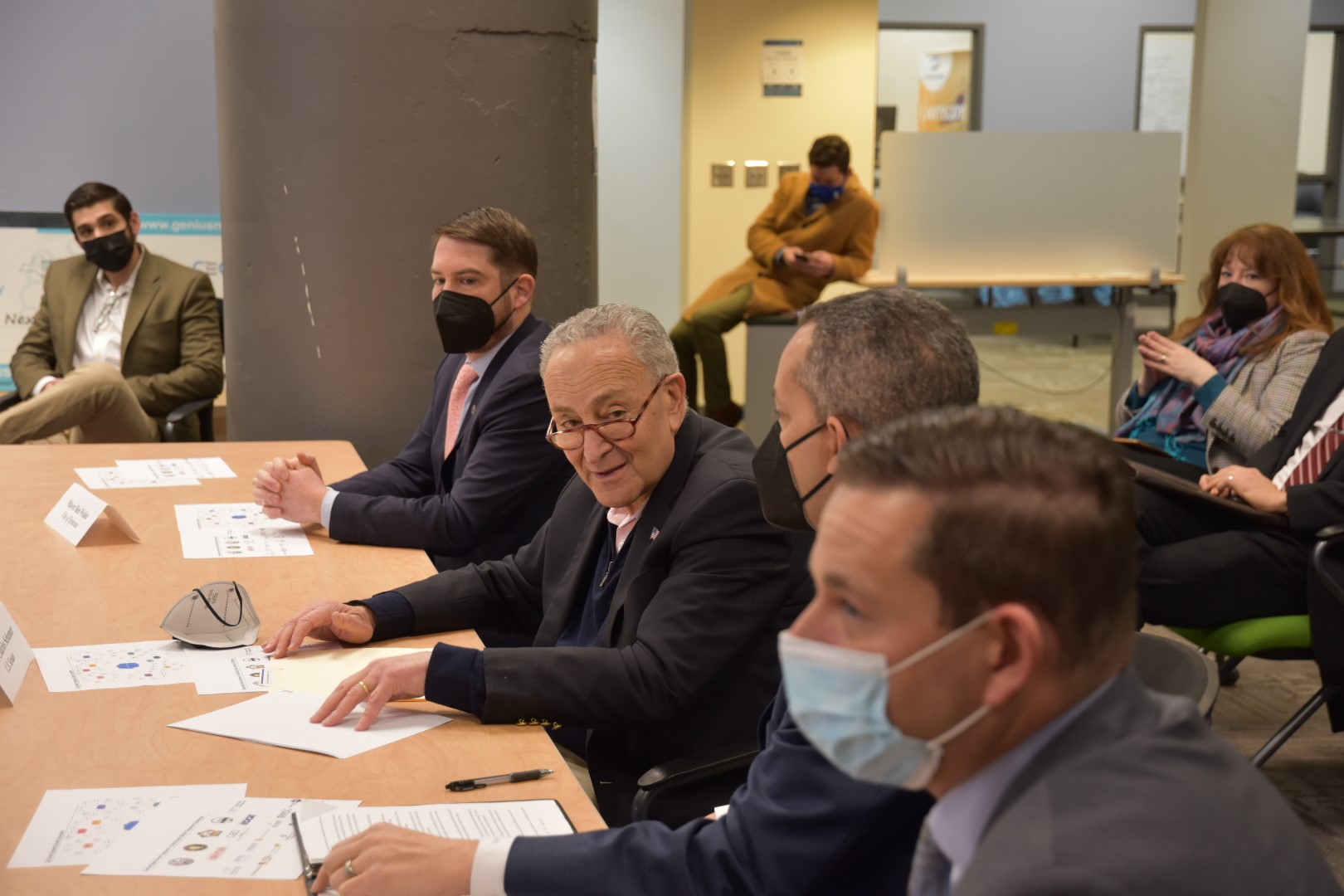 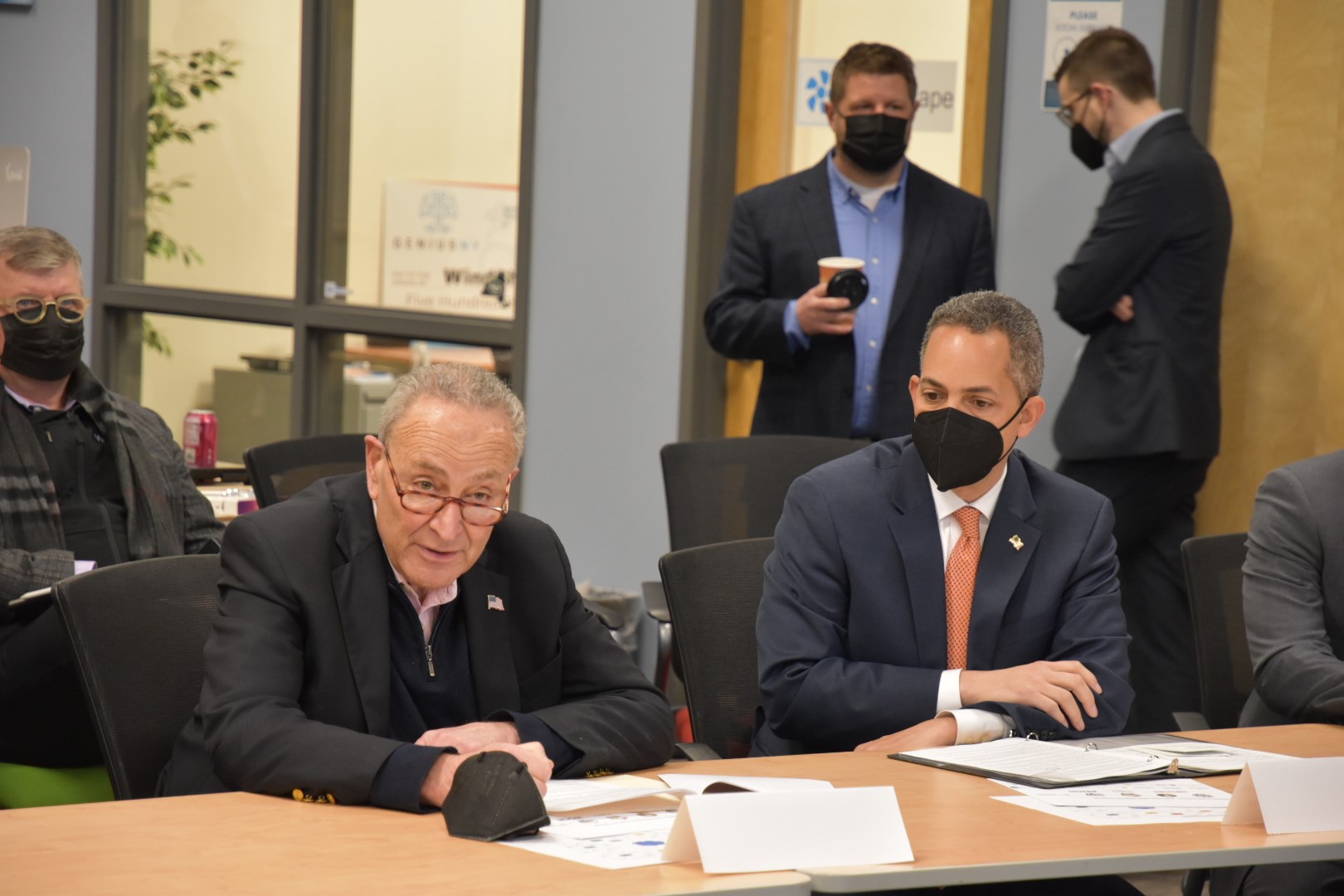 “Central New York and the Mohawk Valley have all the right ingredients to be a major national tech and semiconductor hub. That is why I brought Deputy Secretary Graves to the region to see just how uniquely suited it is to drive not only the Upstate economy into the future, but the entire nation’s competitiveness in critical technologies like semiconductor chips,” said Senator Schumer. “From 5G, to semiconductors, to quantum computing, to UAS, the region has it all; and with state of the art research facilities, a job training pipeline and shovel ready sites like White Pine and Marcy Nanocenter, it is primed to be a global tech hub with further federal investment, including for CenterState CEO’s Smart Systems Cluster proposal.”

During the meeting, Schumer highlighted the many assets Central New York and the Mohawk Valley offer to the nation’s chip industry, including the White Pine Commerce Park and Marcy Nanocenter, both of which are uniquely positioned with large parcels of available land and access to cheap, reliable power and water, to quickly locate a semiconductor manufacturer and the necessary supply chain. Schumer explained that the region is at the epicenter of critical infrastructure from Interstates 90 and 81 to international airports, rail lines, and deep-water ports and that it is one of the greatest concentrations of colleges and universities in the nation, fueling a highly trained workforce, and providing the foundation for premier R&D. The industry has already taken notice of the tremendous benefits offered by the region, as highlighted by Cree-Wolfspeed’s $1.2 billion investment to build the world’s largest 200mm Silicon Carbide semiconductor facilities at the Marcy Nanocenter, which will create over 600 jobs.

Senator Schumer has a long history of fighting to advance semiconductor manufacturing and R&D in Upstate New York. After years of staunch advocacy to invest in domestic semiconductor manufacturing Schumer successfully passed his U.S. Innovation and Competition Act (USICA) in the Senate last year. Schumer is now actively working with President Biden and Speaker Pelosi to secure final passage of USICA into law.

The Smart Systems Cluster proposal prioritizes investments that would support the domestic semiconductor industry. These priorities include infrastructure improvements and expansion at the White Pine Commerce Park, flex space development and expansion efforts at Marcy Nanocenter and the Oswego County Industrial Park, as well as advanced manufacturing training with educational institutions to build a workforce pipeline for in-demand jobs, all of which will support growth of the region’s semiconductor industry. The proposal’s other component projects include:

The $1 billion Build Back Better Regional Challenge, funded by the American Rescue Plan that Schumer crafted and led to passage last year, is designed to assist communities nationwide with accelerating economic recovery from the COVID-19 pandemic, and building local economies that will be resilient to economic disruptions. The Build Back Better Regional Challenge is being implemented as a two-phase program. In December of last year, the EDA awarded $500,000 technical assistance grants to a select group of Phase I awardees. Those selected as one of the 60 Phase 1 awardees, including CenterState CEO, are considered “finalists” and the technical assistance grants will be used by the finalists to prepare more detailed applications to compete for a Phase 2 federal grant to implement transformational projects that benefit their respective geographic regions and that are aligned around a holistic approach to building and scaling strategic industries. In Phase 2, the EDA will award 20-30 regional coalitions $25 million to $75 million, and up to $100 million, for selected projects to grow new regional industry clusters or scale existing ones through planning, infrastructure, innovation and entrepreneurship, workforce development, access to capital, and more.

I first want to thank you and President Biden for your leadership in boosting economic resiliency and recovery to build back from the pandemic, including strengthening domestic supply chains in key industries like semiconductors. As you focus on these efforts, I want to highlight the central role New York can play in quickly expanding domestic chip production and enhancing the nation’s global leadership in growing tech industries. Upstate New York features world-class research and development (R&D) facilities, a topnotch workforce, and several shovel ready sites primed for investment by semiconductor companies. In fact, many of these assets were made a priority in CenterState CEO’s Build Back Better Regional Challenge (BBRC) “Smart Systems Cluster” proposal that was selected for a Phase 1 award. I would invite you and your team to Central New York to engage with local leaders and learn more about how the region can play a central role in rebuilding domestic supply chains.

Central New York and the Mohawk Valley are home to critical assets for the nation’s chip industry. White Pine Commerce Park, for example, is one of only a few locations in the world with the size, at 1,200+ acres, and availability of necessary infrastructure, including cheap, reliable power and water, for locating a major chip manufacturer. Marcy Nanocenter is a fully permitted, shovel-ready, 434-acre greenfield campus that also has readily available access to cheap, reliable water and power. The tremendous benefits to the semiconductor industry offered by Mary Nanocenter have already been underscored by significant investment by the industry, including Wolfspeed’s $1.2 billion public-private partnership to build the world’s largest 200mm Silicon Carbide semiconductor facility at Marcy. The region is also at the epicenter of critical infrastructure from Interstates 90 and 81 to international airports, rail lines, and deep-water ports. Central New York is also one of the greatest concentrations of colleges and universities in the nation, fueling a highly trained workforce, and providing the foundation for premier R&D.

CenterState’s “Smart Systems Cluster” aims to expand the region’s semiconductor manufacturing industry, fortify supply chains, invest in research & development in emerging tech fields, train workers to enter in-demand fields and create thousands of new jobs. Specifically, the proposal prioritizes infrastructure improvements and expansion at the White Pine Commerce Park, as well as flex space development and expansion efforts at Marcy Nanocenter and the Oswego County Industrial Park, both of which will support the semiconductor supply chain. The proposal also focuses on advanced manufacturing training with educational institutions across the region to provide a highly trained workforce to chip companies.

Given the chip shortage faced by the nation and that the U.S. is losing its leadership role in the chip industry, I prioritized the inclusion of $52 billion in emergency spending as part of the U.S. Innovation and Competition Act (USICA) to implement critical federal semiconductor manufacturing and R&D incentives to capitalize on the critical assets offered by Upstate New York to quickly revive U.S. chip manufacturing and competitiveness. As we work with the House to pass a final USICA bill into law and as the Administration begins planning for implementation of the semiconductor programs, Central New York and the Mohawk Valley are primed to support an expansion of domestic chip production. Centerstate’s “Smart System’s Cluster” BBRC application will further position the region to play a key role in reasserting America’s leadership. I would request that you closely consider all that Central New York, the Mohawk Valley, and the broader Upstate New York region have to offer, and I invite you and your team to visit Central New York to hear directly from the community on its plans to enhance the nation’s competitiveness in the semiconductor industry.

I appreciate all of your partnership to date and look forward to continuing to work with you on implementation of these critical programs. Thank you for your attention to this urgent matter.