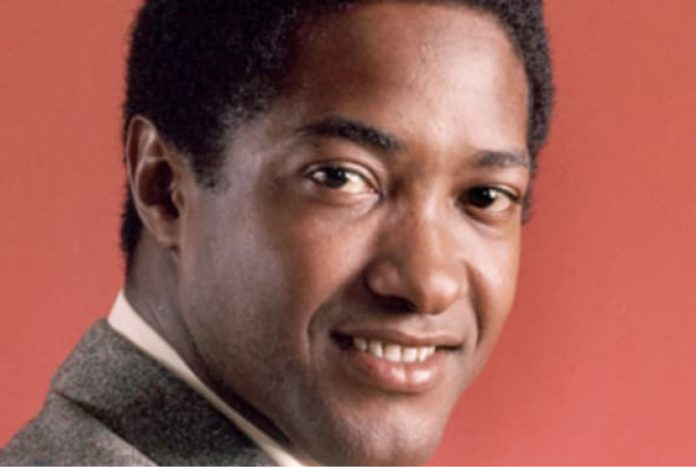 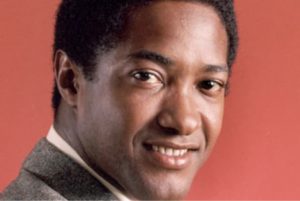 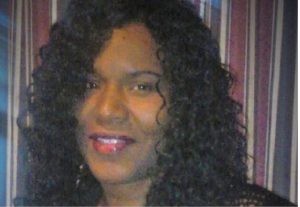 Today, getting your DNA tested is a trend. People pay a fee to businesses like My Heritage DNA or Ancestry dot com, receive a kit, and then submit their DNA through a saliva sample. The DNA is then analyzed, and the results posted on a secure webpage. Most people learn more about their ethnic background or learn they have some heritage they never knew they had before. Some are surprised, even shocked, to learn their ethnic background is not what they thought it was. Central New York minister and musician Roselyn Trapps can top all of those.

Her DNA test revealed she is the daughter of American music legend Sam Cooke. 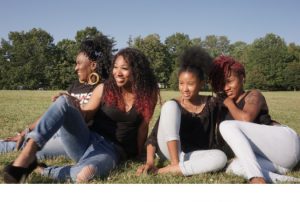 While many people hear family legends, stories that get passed down from the generations, some of them turn out to be accurate, while others stem from something a family member invented. Trapps was sure this story was true, even before the DNA test, for precisely the opposite reason. It took her family years to reveal the identity of her biological father.

“I knew it to be true because my whole life I was told my father was deceased.  Then one family member came forth with the truth, other family members knew it was the right time for me to know the truth and it was revealed to me that Sam Cooke was my father,” Trapps explained.

Rose, which her family calls her, is a beautiful woman. Sam Cooke was a handsome man. Once the DNA was confirmed she reached out to a few family members in the past year. At one point when Rose found a Cooke relative on Facebook, she sent a photo of herself. The resemblance was so great that she was mistaken for the mother of the newfound relation.

And then there’s the voice. Once Roselyn begins to sing it is clear that there is a quality to her voice that is shockingly magical. There is no doubt that she is a gifted musician and that it is authentic. She has a resonance that is unique, refined, and captivating. Rose has since been accepted as the unexpected and precious daughter of the greatest Black singer/songwriter of the 1960s.

As the family has been researching and studying the great man in the past year, Rose has noticed some of the similarities she sees between her father’s work and her own.

Another family similarity is the love of God. Sam Cooke’s father, Rev. Charles Cook was a preacher and Sam Cooke started singing in the church. Roselyn Trapps and her daughter Tiffany Trapps Richardson of Rome are both preachers. “Preaching runs in the family, on both sides myself and my daughter Tiffany Richardson are preachers. I claim and pray for all my children to follow in ministry one day!” says Trapps.

Sam Cooke’s legacy further lives on in Trapps’ daughters as Rose has six daughters, all of whom are gospel singing artists like their mother and grandfather. “Evers since they were little, Tiffany and Nicole would write poems and make up songs. When I was a little girl I would make songs too. 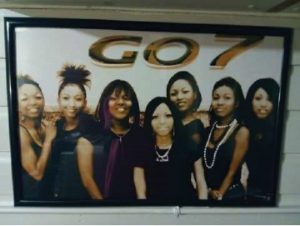 I would sing and make up songs all of the time. I never knew this would be the outcome, but my kids did the same thing! Of course, I encouraged it.”

Roselyn Trapps family has been singing together since the girls were all youngsters. Roselyn as their mom, as well as choir director, began training them at young ages to sing in harmony. Their first group was called Go 7. The mother and six daughters wrote and sang gospel favorites. Just like her father and their grandfather Sam Cooke who began as a gospel singer in the church as well.

“Lord knows, I had six daughters, six girls. You know I had to keep them busy.  They wrote songs and did some beautiful singing. I kept them busy with a drill team. And they were in church four days a week! Sunday church service, Bible study twice a week, Tuesday and Thursday. Saturday praise service and choir practice. That went on for 12 or 13 years.”

“When they first learned he was their grandfather, they were astounded, and overwhelmed with excitement,” Trapps said. “They were also eager to write more songs and to sing more.”

The family now records and performs under the name of the “Roselyn Cooke ‘Soul Stirrers”. Soul Stirrers is the name of the Gospel group founded by the legendary Sam Cooke at the beginning of his career. The use of this name is with special permission and acknowledgment of the estate of Sam Cooke. As a matter of fact, Roselyn Cooke has access to any and all of the music of her famous father.

“My girls sound so wonderful when they sing.  We have first and second soprano, first and second alto, tenor, and baritone. The sounds they make as a group is a phenomenon. When I listen to them sing it makes me shiver. If I had to compare them to anyone it would be the Sounds of Blackness,” said Trapps.

“If I say C’mon let’s put together a song, five minutes later, they have a song. It’s amazing the harmonies they make and some of my girls are rappers. Just naturally they’re rappers so, the sound is fresh. They’re just amazing. They’re really talented”

Tiffany Richardson, Rose’s 2nd oldest daughter is her mom’s administrative assistant to operate the Soul Stirrers. “She really holds it together,” Trapps noted, listing daughters Kristina is the eldest, then Tiffany, Nicole, Quinta, Tamique, Aleah. Youngest daughter Autumn will soon become a singer as well as the oldest grandchild Jazanay.

“Tiffany also helps me maneuver all of the legal challenges that are all new to me. They’re new to all of us. This is such a dramatic change in who we are and how we are perceived. It is so exciting and wonderful.

“Tiffany also has written songs for the Soul Stirrers and does a lot of the organization and is an outstanding music professional in her own right. 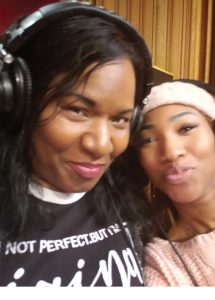 Her ministry is based in Rome which includes a praise team. She runs a Facebook page, called “Women are Free” which provides inspirational messaging for women. The mother and daughter team also produce podcasts.

On the go-live program, she invites other guests on the show on different topics. Richardson leads the choir, called One Voice Community Choir with Randal Beavers. The choir has between ten and fifteen members who have had limited rehearsal during the Coronavirus pandemic. She has been a guest on the Hot Seat.

“It’s a journey. We are the beginning of a beautiful journey. It’s all new and unfolding right here in all of this beautiful music. Like now I’m rewriting, reworking several of my father’s great hits into Gospel versions. We’ve already recorded ‘You Send Me’ into ‘Lord You Saved Me. Right now I’m working on “A Change is Gonna Come.” I put a twist into it with his style,” says Roselyn.

And as our world changes so greatly from what it was when Sam Cooke was at his height, we remain in wait the promise of justice and freedom. Roselyn told a story of her father’s encounter with a White Supremacist Sheriff when their tour bus was going through the South.

The troupe had stopped for a meal at a roadside restaurant and there was trouble with being served. Dionne Warwick was on the tour bus and had a bad encounter with a waitress in the restaurant. Once the band had returned to the bus, the Sheriff boarded the bus and louded the group demanding to know ‘Which one of you gals had given that lady a hard time?”

The story goes that Sam Cooke stood and stepped to the law enforcement officer to inform him that there were no “‘gals’ on this bus” and that he had best get off of said but go on about his business.”

Sam Cooke was an activist and a giant in the midst of the ’60s when America first began to wrestle with its racist past. When segregation was being fiercely defended by White supremacists when it was believed that Black folks were inferior, incapable of intellectual achievement, not fit to walk among White folks, when Black life was controlled in every way shape and form came this music.

The impact and acceptance of Soul Music were so powerful it could not be stopped. Neither could it be matched or denied. Scores of American youth Black and White danced and sang and reveled in the joy it brought and brought it with class and style. Elegant, stylish, trending, beautiful Black faces delivered up this new form of fresh, unique, sexy, and smooth music that penetrated the very fabric of American culture. 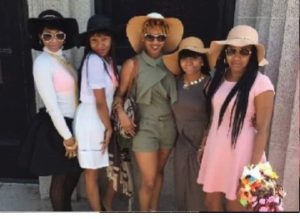 So juxtaposed to the ugliness of the nightly news scenes of assassinations, protestors being beaten and killed, churches and homes being targeted and bombed came the sounds of sweet Soul music from Motown, Philly, and Chicago. Soul music presented the era’s height of artistic creation clamored for and drawn from by musicians all over the world. 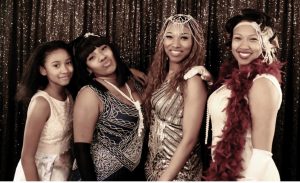 And in the midst of all of this fabulous music and artistry, Cooke brought hit after astonishing hit like Twistin’ The Night Away, Cupid, You Send Me, Only Sixteen,  Chain Gang, Another Saturday Night and I Ain’t Got Nobody, Frankie and Johnny and finally A Change is Gonna Come. It was Cooke and other artists whose music flew in the face of the shameful, bigoted, and violent treatment Blacks were subject to. It was not to be denied but coveted for generations to come.

And Sam Cooke was only one man among the many who brought that sweet Soul Music to the forefront of American culture and, bring it he did. He was a king among the many who came and now, we here in Upstate NY have the blessing to have among us his progeny, his Princess Roselyn, and her royal court of daughters and granddaughters intent upon keeping his name and music alive among us. Long live the King.

Facebook
Twitter
Previous articleVoices of Polonia: Jadwiga of Poland, Queen and Saint
Next articleBecoming a Caricature of Ourselves