“In Bethlehem in the grotto where Christ was born, a light shines into the darkness. The light is meant to serve, as light serves for so many religions and philosophies, as a symbol of truth and love and hope. Hope, that even in a dark season, we may begin to see the world BENDING TOWARDS THE LIGHT.”  – Charles Kuralt from The Jazz Nativity “ Bending Towards the Light

The “Jazz Pastor,” the Rev John Garcia Gensel of St Peter’s Lutheran Church in New York City, needed a Christmas fundraiser for the church and came up with the concept of a jazz based musical presentation of the first Christmas. He tapped New Yorker Anne Phillips to put it together.

Phillips was the right choice The production, named “Bending Towards the Light- A Jazz Nativity” caught fire and grew legs for a 35 year (so far) nationwide run, with superstar performers joining “up and comers” and local talent when on tour.

Utica born opera singer Leonarda (Lee) Priore co-founder of the Chelsea Opera Company assumed responsibility for the production the show 8 years ago, According to Marc Delmonico and since 2016, has brought “The Jazz Nativity” to her Utica home town. Bending” is now an Advent/Christmas tradition at St Mary of Mt Carmel/Blessed Sacrament Church. Marc. Delmonico, an entertainment producer in his own right as well as a performer, said that more than 50 people were involved in the 2021 presentation.

Ms Priore annually dedicates the performance to her brother, local attorney and singer , the late Nicholas Priore She and the Chelsea Opera gratefully acknowledge a grant from the New York State Council on the Arts for helping make the event possible.
The production characterizes the Savior’s birth as light piercing the darkness of life in hard times and providing inextinguishable encouragement for humanity to let teach individual’s own “light” shine to illuminate the world. 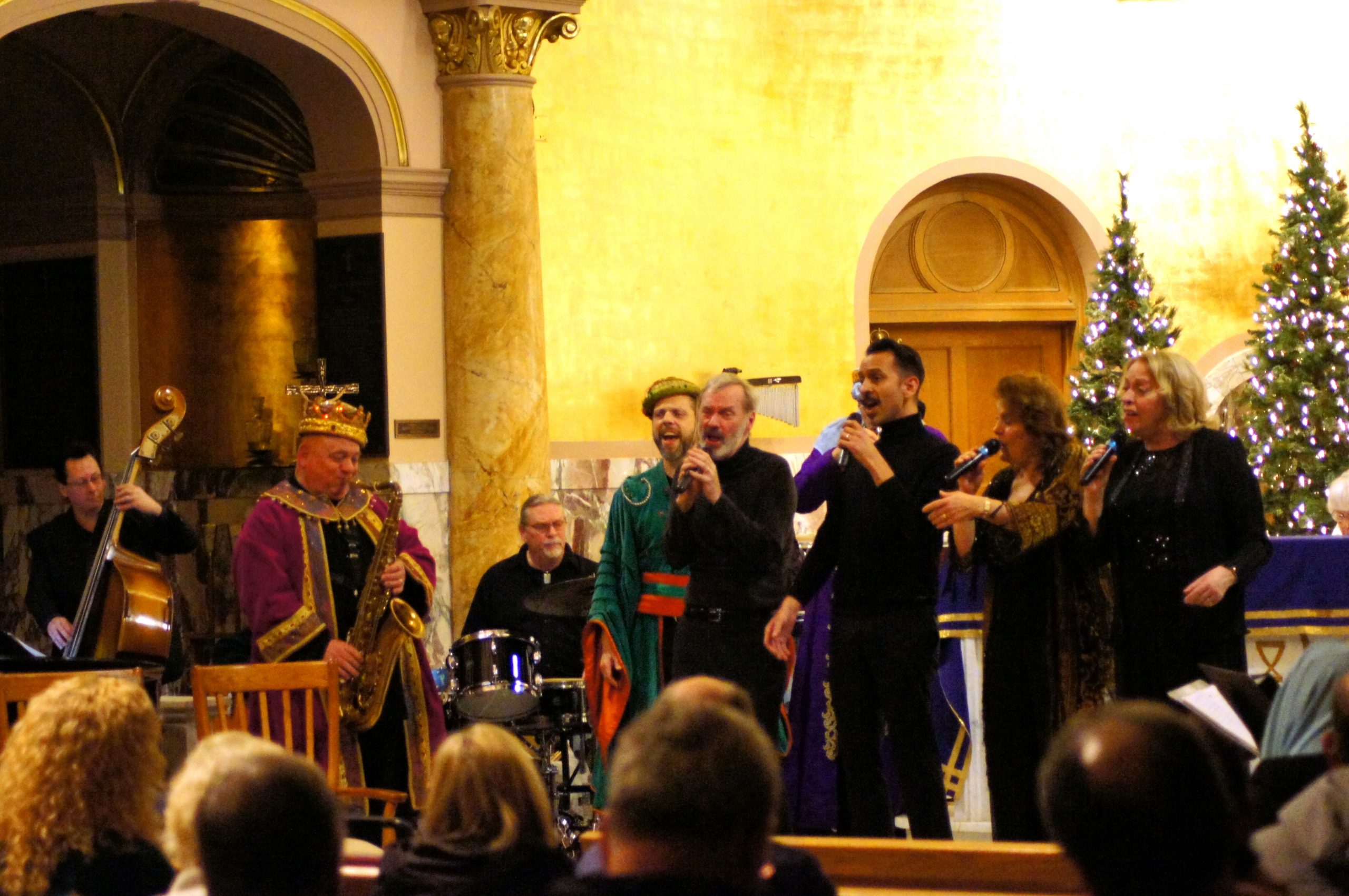 (Left to right) Frank Grosso, bass, Sax King Joe Carello , drum, Tim Horner, Dance King Max Pollack, and the “Royal Bopsters.”Jazz provides the medium for the production/play/opera/concert’s message According to Priore,” We have hot jazz, cool jazz, swing, bee-bop, Dixieland and scat” Those styles were used in interpretations of Christmas classics from pop to sacred standards ranging from a haunting saxophone “Silent Night” to a rollicking Dixieland version of “Joy to the World” Original music by Anne Phillips . Dave and Iola Brubeck and others were also featured.
Chelsea’s “ Royal Bopsters” and the St Mary of Mt Carmel/Blessed Sacrament Choir provided vocals.

Utica’s pop “Piano-man” Rick Zuccaro, a regular at the Jazz Nativities here, once again provided a keyboard prelude on his “Mazda 88” ” Grand.. In his 9-5 life, Zuccaro is a Steet Ponte Mazda dealer.

The “Three Kings” left their gold, frankincense and myrrh at home and instead , brought a sax, a trumpet and some serious tap dancing skills as their gifts for “The Newborn King”
The “Jazz Nativity”’s superstar lineup of musicians, , including Dave Brubeck, Lionel Hampton and Tito Puente, has changed, but 30, the Utica performance sill had a direct link to the founding vision . It was conducted and energized by Anne Phillips who, 35 years ago, turned the “Jazz Pastor’s” Christmas fundraiser concept into a spiritual entertainment with a trans-century run which gives no indication of running out of steam any time soon.