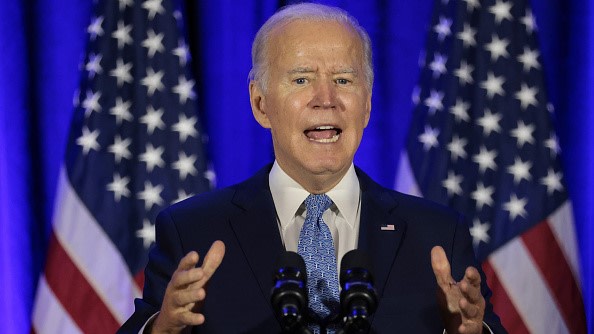 Biden delivered the graduation speech earlier today and began by reflecting on his presidential campaign and personal history. After a few moments, he addressed the “tumultuous and consequential moment” in which the students are graduating.

“No graduating class gets to choose the world under which they graduate,” the president started. “Every class enters the history of the nation up to the point that has been written by others, but few classes every once in a few generations enter at a point in American history where it actually has a chance to change the trajectory of the country.”

“That’s not hyperbole. You face that inflection point today,” Biden continued. “I’m confident you’ll meet the moment you’re ready because you’re part of a proud and sacred tradition: an HBCU tradition [with] more than 180 years of excellence. Institutions that instill a sense of purpose and commitment to make a difference in all their students.”

Biden then added that he’s “counting on” the graduates to be catalysts for change before acknowledging the power that HBCUs hold in crafting the next generation of Black professionals.

Later in his commencement speech, Biden also reaffirmed his commitment to combating the issue of police brutality.

“The fight’s not over,” he said. “This administration’s going to continue to fight for meaningful police reform in congress and through additional executive actions. And you will be our next generation of elected officials, police chiefs, civil rights leaders. Leading the way.”

The United States president also received an honorary doctorate in humane letters from SCSU following his speech. This occasion marks the first time a sitting president delivered a commencement speech in the school’s history, established in 1896. Biden was notably invited to give the address by South Carolina Congressman James Clyburn, the initial keynote speaker.