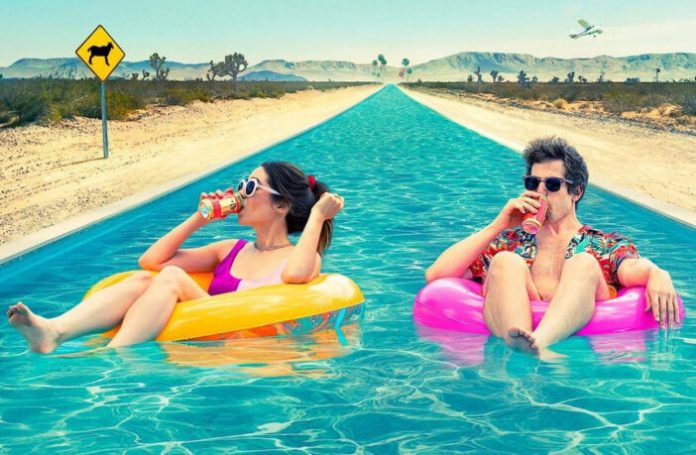 The first thing that comedian Andy Samberg’s new movie, “Palm Springs,” is likely to garner criticism for is its unavoidable comparison to “Groundhog Day.” But to dismiss the picture for this reason, to write if off as a lesser copy, is to miss out on a movie of inherent charm; and to fail to realize that all cinema borrows from films that came before, and imitation is the sincerest form of flattery.

“Palm Springs” deals with a luckless loser type stuck in a ‘time loop.’ Nyles (Samberg) wakes up every day in the same location—a hotel, watching his girlfriend get ready for a wedding that night to one of her best friends. No one at the wedding knows him; but he knows them all intimately as he has been living this day for what may be a million days. He has conversed with them, bonded with them, slept with many of them and along the way discovered much about himself in the process. But it isn’t until he has an encounter with the bride’s sister Sarah (Cristin Miloti), who inadvertently gets stuck in the time loop with him, that he begins to realize the harm he has caused others and his dependence on his new reality. His old life is vanished, replaced by the infinite loop; only Nyles doesn’t even know if he wants to find a way out.

What works about “Palm Springs” is that it is, at its heart, a comedy, and is very approachable. It deals with some deep concepts (‘what is the meaning of life?,’ ‘do actions have consequences?’…and, yes, love), but presents them in a easily digestible way that doesn’t require too much heavy lifting from the audience. The time loop itself is presented in the same way; there’s no explanation for it, it just exists, and the sarcastic and resigned way Samberg’s Nyles explains it to Sarah, the newcomer to this universe, shows he may have been stuck here a very, very long time. Sarah, who has been in it for mere weeks, remembers her life before; Nyles can’t even remember who he is.

Of course, for all this to work, the characters have to be likable, and Samberg and Miloti deliver. As with a recently reviewed piece by me, Judd Apatow’s “The King of Staten Island,” and its SNL star Pete Davidson, Samberg’s comedy is unknown to me. I don’t know what chops he brings to the comedy world, but here he is able to weave irreverence and charm interchangeably, and has terrific chemistry with Miloti. Miloti, who is known for a role on TV’s “How I Met Your Mother” and Scorcese’s “The Wolf of Wall Street” is sweet and endearing, yet sarcastic and bitter—and by the end of the film you honestly believe she and Nyles love each other, despite their bizarre circumstance. For its simple formula, “Palm Springs” hints at deeper movies that share its subject matter, namely “Eternal Sunshine of the Spotless Mind” and “Mr. Nobody,” yet doesn’t drag audiences down unwitting stretches of depression or desperation to tell its story.

Ancillary characters add to the film in varying ways. Doomed to repeat the night of Sarah’s sister’s wedding (Camila Mendes) in perpetuity, a host of characters find their way into the mix. We see Peter Gallagher, fan favorite from TV’s “The OC,” and Meredith Hanger, from “Bob’s Burgers” as Nyles’ disinterested girlfriend. June Squibb and Chris Pang add to the mix. Most interestingly is J.K Simmons, who proved to me in this film that he can take any role and run with it. Domineering in “Whiplash,” hard-nosed in “Spider-Man,” here he plays a man who  gets trapped in the time loop with Nyles, and has been for some time. He despises Nyles for this and tries to kill him for most of the movie (only, we learn, death and sleep only lead one to wake up at the beginning of the day all over again). Simmons absolutely owns his character and takes what could have been a stock role and turns it into one of growth. His closing scene is one of beauty, and acted to perfection.

“Palm Springs” is a film I stumbled into by accident. It presents its bizarre story without apology, and somehow drags you into its world with ease. This repeated ‘day’ feels full of anguish, revelry, shenanigans, frustration, and, oddly comfort. You’ll laugh, while also experiencing authentic emotions. With solid writing, pleasing acting, and set pieces that never make it feel anything but authentic, you’ll leave the movie with a smile. The only major criticism is its predictable and safe ending, but it’s forgivable. You’ll feel better having watched this film, and it packs an indie punch I wasn’t expecting from a Hulu original. That streaming studios can pump out films like this amidst the Covid crisis, is indeed an example of taking life’s lemons and making sweet lemonade.

Mark Ziobro is the Managing Editor of The Movie Buff and started the site in 2011 with Matt DeCristo. He is a lover of cinema, his favorite genres being drama, horror, and independent. Follow Mark @The_Movie_Buff on Twitter for all site news.