Thank you Great Britain for slamming the evils of socialized medicine and socialism down the throats and into the minds of us who might otherwise never have figured out this loathsome system…The story of the baby, Alfie Evans who YOUR government killed… accomplished that with great power and facility.

The Pope, the medical practitioners in the free world (outside England), and the citizens of the world cried out for the opportunity to bring this beautiful baby a longshot cure. Britain’s reply? “No, he must die!” He was only a number; an expense which did not serve the balance sheet of “society”. When the world’s horror at your callous brutality finally registered with you, you became properly embarrassed and you dug your heels in to defend your wrongness.

Wow, but then, why are we surprised? It’s typical of you, GB… per your wrong attitudes toward and wrongful actions against Ireland…and prior in formative Israel in the late 1940s…Early 50’s.

You regularly and repeatedly defend your national wrongness with aplomb approaching verve… Perhaps those two characteristics combined give the best elemental analysis of British hubris. Your combination of socialized “single payer” medicine which puts cash above cure and the aforementioned British hubris which elevates wrong over right as long as it’s “British wrong” has labeled you and your system international pariahs.

The British Empire is widely recognized as the bloodiest empire of all time. International conquests now impractical for the enfeebled island nation, Britain now turns inward to satisfy its ‘otherwise frustrated control cravings and bloodlust. It is now finding new victims on its own soil through British socialized medicine’s latter-day “Slaughter of the Innocents”.
America, you have SEEN the “single payer” death panel at work in England. All doubts removed. They exist as prime components of a single payer system…withdrawing financial support for heroic medicine even for children. 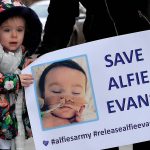 In England’s case, particularly odious, it legally prevented anyone else from helping even at no cost. You saw a single-payer socialized medicine system rip Alfie Evans and his care away from his parents, away from an eagerly-awaiting world wanting to try a cure, even when a merciful Pope intervened for the child’s sake. Britain, your de facto death panel made Alfie Evans a martyr. Let’s make sure his death was not in vain.

America do YOU want a fate like Alfie Evans’ for YOUR children if they fall desperately ill? Oppose single-payer socialized sickness insurance and keep your life-or-death decisions to your own family and your own physician.