Medaria Arradondo, the first Black police chief of Minneapolis, to 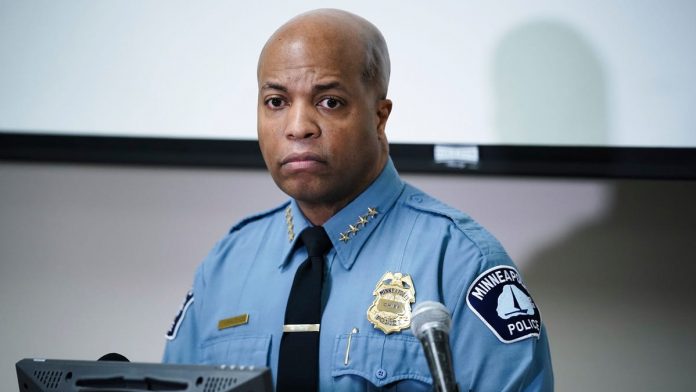 The Minneapolis police chief says the city will withdraw from police union contract talks as a first step toward making reforms to the agency in the aftermath of George Floyd’s death. (June 10)

Medaria Arradondo, the first Black police chief of Minneapolis who led the department amid nationwide protests over the death of George Floyd last year, announced Monday he will not accept a third term.

A fifth generation Minnesotan who started as a patrol officer in 1989, Arradondo rose through the ranks and was appointed chief in 2017. His predecessor, Janee Harteau, resigned amid local and national outrage over the police killing of Justine Ruszczyk Damond.

“After much personal reflection and thoughtful discussions with my family and Mayor (Jacob) Frey, I have made the decision that I will not be accepting a new term as chief of the Minneapolis Police Department,” Arradondo, 54, said at a press conference. “To the city’s 420,000 residents, it has been such an honor and humbling privilege to be your public servant for the past 32 years, and the past 4 1/2 as your chief.”

From our editor, to your inbox: Editor-in-chief Nicole Carroll takes you behind the scenes of the newsroom in this weekly newsletter

Frey said he hopes to announce an interim chief this week who will start after Arradondo finishes his term in mid-January. A nationwide search will be conducted for Arradondo’s replacement.

“When the people of our city hear the words public service, I think they should they should think of Chief Arradondo and the work he has done through thick and thin and some of the most difficult moments that our city has ever experienced,” Frey said.

When Arradondo took over the department, he faced both backlash over Damond’s death and deep mistrust after the 2015 police killing of 24-year-old Jamar Clark. He spoke of restoring trust during his swearing-in ceremony.

In the wake of Floyd’s death, Arradondo quickly fired the four officers involved and would later testify that former officer Derek Chauvin had violated department policy. Chauvin was convicted of Floyd’s murder in April.

Arradondo and Frey have touted several reforms including banning chokeholds, neck restraints and “warrior-style” training, requiring officers to intervene when they witness improper use of force, and preventing officers from reviewing body camera footage before completing an initial police report when deadly force is used.

But the chief and the department came under fire for what critics called a long history of misconduct and discrimination against people of color. In November, the department survived an attempt to disband and replace it with a public safety unit which Arradondo publicly opposed. About 56% of residents voted against that proposal.

The Justice Department and the Minnesota Department of Human Rights are investigating the policies and practices of the department, which could result in changes.

The department has struggled with same spiking crime rates seen in many major U.S. cities in the past 18 months. The department is about one-third below its authorized maximum size.

Arradondo said Monday that Floyd’s death and the aftermath did not impact on his decision to retire. He said although Frey and some elders in the community wanted him to continue to serve, he felt it was best to step down.

“Now is the right time to allow for new leadership, new perspective, new focus and new hope to lead the department forward in collaboration with our communities,” Arradondo said. “This, at the end of the day, is what I feel is best for the department, certainly for my own personal well-being.”