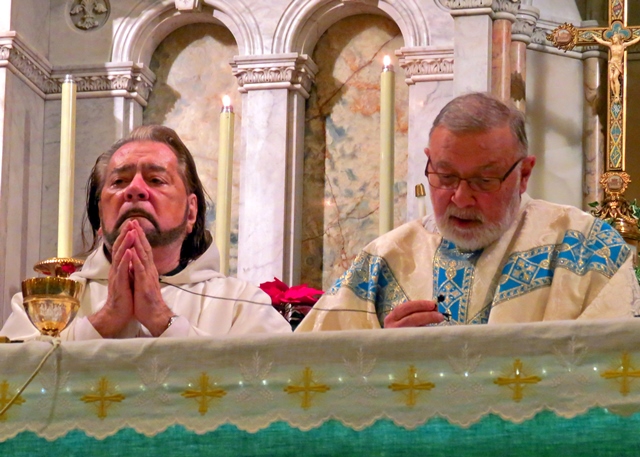 Father LaFache was born in Albany, N.Y., March 10, 1938. At the age of five years old his family moved to Utica, N.Y. to an area near his grandfather, Antonio, which was a typical Italian neighborhood across from an Italian Church, St. Mary of Mt. Carmel.

The church stood in the center of a parish convent, a school, a parish, a parish gymnasium, and a rectory. Father LaFache received his vocation to the priesthood there from the Catholic priests in this environment. He remembers those priests such a self-giving, kindly, loving and generous people! He often reminisces about his childhood years there.

From 8th grade, Father went to Utica Free Academy and graduated from there in 1956. In 1960 he graduated from Utica College of Syracuse University. With an interest in Science, he attended Simmons School of Science and Embalming. Upon his graduation from Mortuary School and Embalming, Father later studied 3 years of Philosophy at Hartford University. He finally attended St. Bonaventure for his studies for the Catholic Priesthood. The years at St. Bonaventure were challenging experiences and filled with the taking on of spiritual knowledge and fulfillment unlike any other time of his life.

Father was ordained at the Cathedral of the Immaculate Conception in May 1968 in a class of eighteen students and with a Master’s Degree of Divinity. He always says his student years were his best years! Later at St. Matthew’s, East Syracuse, he continued his priestly work in CCD classes and all of the parish work typical of a new parish assignment.

Following a three and one half year assignment filled with wonderful people, and the great pastor, Msgr. James K. Bennett, Father was assigned to St. John’s in Utica, N. Y. Fr. LaFache taught at the former all-girls’ Utica Catholic Academy as well as doing the work of an associate pastor at St. John’s.

Following Utica Catholic Academy, Father was assigned Chairperson of the Religion Dept. at Notre Dame High School. He then went on to serve the St. Anthony’s parish as assistant pastor and finally pastor. He also assumed pastoral duties and a Chaplaincy at Masonic Home.

While LaFache was in residence at St. Anthony’s he was responsible for introducing to our area and hosting the Filipina Mystic Emma Deguzman to many Masses and healing services both locally and at the LaPieta Prayer Group in Constantia.

Currently, LaFache is Priest in residence at St. Joseph St. Patrick’s Church where he is the spiritual director of the Padre Pio Prayer Group which meets the third Thursday of the month. Fr. LaFache conducts a Healing Mass the 1st Tuesday of the month at 5:30 PM.

He recently retired his chaplaincy duties at St. Elizabeth’s Hospital. He views his work of tending to the sick and dying as “the pinnacle of a Christly life.”Fr. LaFache not only tends to the needs of the physically sick but the spiritually sick as well. He makes house calls to pray for the immortal souls of those in the throes of spiritual conflict, addiction, and sorrow.

Fr. LaFache describes his half-century of life as a Priest as “A masterpiece of spiritual excitement.” And thanks to Jesus for a wonderful experience always!

Dellos explains, “My friend and fellow altar boy liked Catholic school and got me interested so I went there. Being an altar boy was significant in my life. It led me to the altar where I served Mass. I felt the presence of the Lord during the Liturgy and had an inclination to become a priest at the age of 11. I entered into my studies for the priesthood at St. Bernard’s Seminary in September of 1960 at the age of 18.”

“The first Mass Fr. Dellos served as an altar boy was for a local legendary priest, Fr. Richard O’Neill who now says the 7:30 Mass every Sunday at St. Joseph’s and St. Pat’s. Fr. O’Neill will soon be 90 years old.

“Fr. O’Neill was then assigned in Binghamton and would come to Endicott. I got to know him through serving for him. I was ordained on May 18, 1968. That was the same day and the same Diocese and the same Bishop as Fr. LaFache’s ordination. Now we are blessed to serve together in this wonderful parish of St. Joe’s and St. Pat’s.”

Since 2002 when Fr. Dellos assumed the role of pastor of one of the oldest Catholic churches in the city he has overseen many significant events and developments including The years of preparation and diocesan coordination for canonization of Utica’s St. Marianne Cope in 2012, the 175th Anniversary of St. Joseph’s Church, the 25th anniversary of Perpetual Adoration , the 29th Anniversary of St. Faustina Divine Mercy Sunday, the 30th Anniversary of the Rosary Crusade, the 100th Anniversary of Our Lady of Fatima, the establishment of Mr. Marianne Soup Kitchen, the John Bosko house with Deacon Gil Nadeau, the purchase of the property and erecting the of the statue of St. Marianne at site her childhood home on Schuyler Street. home garden shrine

When asked to comment on his 50 years in the priesthood Fr. Dellos remarked, “It has been an adventurous ride with all of the unpredictable surprises that the wild goose (Holy Spirit) has brought my way.”