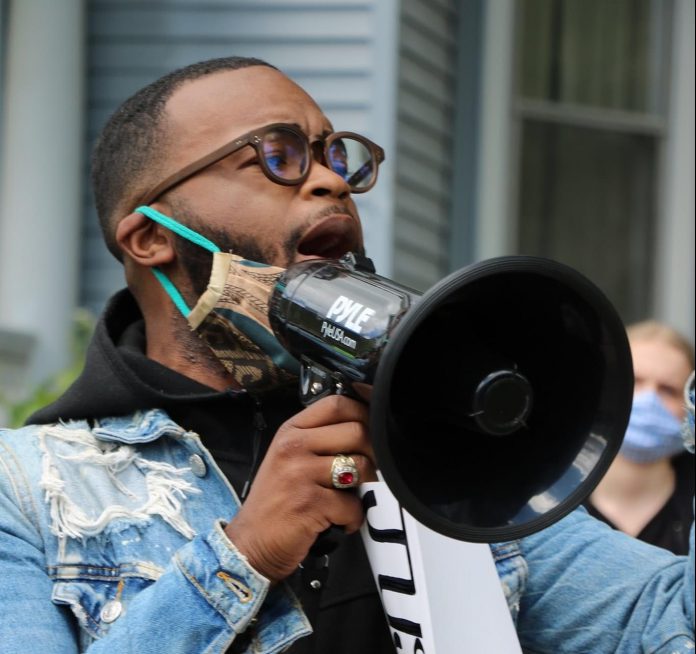 On September 25th, 2020, Councilman Delvin Moody and 12 other community leaders signed a statement calling for an apology from Claudia Tenney. An ad from Tenney’s office describes Anthony Brinidisi (at a Black Lives Matter march in Utica) as “marching with cop-haters” and “turning his back on back the blue”. The march itself was to support Black Lives Matter and to demand accountability for the death of George Floyd. the ad is available to view here. The congressional candidate has repeatedly referred to those asking for accountability from the justice system as “Cop Haters” and generally anti-American.

We are appalled that Claudia Tenney would continually label honest and righteous calls for justice and equity as “Cop Hating”. After the death of George Floyd, we held a peaceful protest to call for equity in the treatment of citizens, increased accountability/transparency, as well as to sympathize with the numerous unarmed persons killed by police. Over 700 people from across the Mohawk Valley came together in unity and spoke from a place of love with a true desire to see this area and nation better. There were no statements of “cop hating” or divisiveness. Had the congressional candidate joined us, she would know that. Instead, she has taken every action to demonize the attendance of U.S. Representative Anthony Brindisi and his support for reform and improved police-community relationships. She should apologize to the hundreds of people who stood in that spirit of unity – including the Utica police officers who marched with us. No person who sees justice and equity as “cop hating” should represent NY’s 22nd Congressional District.
As a community, we work every day to help build trust in the community between law enforcement and its citizens. It is hard work. To label that tremendous moment of unity as anything other, is disheartening and discouraging. Claudia Tenney has not supported our efforts of unity and instead, has perpetuated the very sentiments of division that many of us know all too well. That is because her only tactic is fear. We hold dear the principles of democracy, the right of free speech, and public discourse. We do not always agree with everyone, nor do we write this in a partisan fashion as both democrats and republicans are signing onto this letter. We do refute and in the sternest of terms her labeling of our work as cop hating. The logic is simple. Using images of U.S. Representative Anthony Brindisi at the George Floyd Rally, as evidence of him “marching with cop haters”, explicitly suggests that all those who were present hate the police! Justice & Equity are not hate.

This statement was signed by Delvin Moody and Reverend Sharon Baugh.