Liverpool and Manchester City hurl everything at each other in 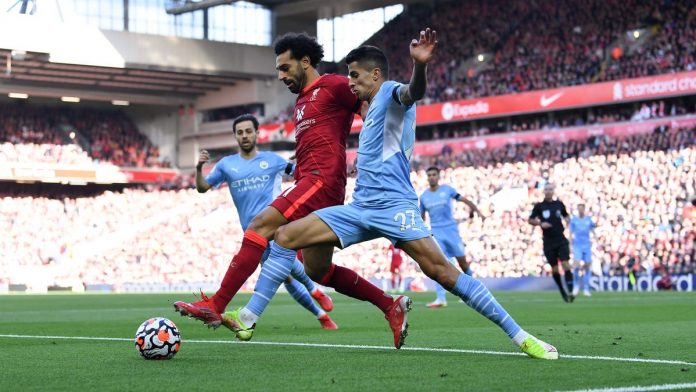 It’s rare that games between the top-table inhabitants of soccer can live up to the billing. They usually cancel each other out, the fear of losing greatly outweighing the benefit of winning, and you might get the odd goal here or there in contests that are high on tension and intrigue but low on anything happening.

Manchester City and Liverpool don’t really believe in this, as neither one really knows how to back up, as they proved in today’s 2-2 draw. Aside from games when Liverpool have every centerback on the roster looking like the Black Knight, these encounters have been enthralling, along with the tension and drama that are inherent. They’re the soccer version of the Battle of Gondor, with each side throwing everything at the other, including themselves.

They put on another classic today, at least in the second half. Because it was only one half that was truly competitive, City will probably feel aggrieved at not winning, though a draw on the road against one of their closest competitors makes it a better result for them than for Liverpool. Especially combined with their win at Chelsea last week, meaning they’ve gotten four points from their two hardest games on the slate.

Still, City could have easily put this one away in the first half, whereafter the first 10 minutes they sat on Liverpool’s chest for the next 35 like an older brother doing the typewriter to the younger. Liverpool couldn’t escape their own end, and their usual lethal counter had its wings cut off in the hangar. With Diogo Jota starting ahead of Roberto Firmino in Liverpool’s frontline meant that their three forwards were just butting up against City’s backline with no one dropping off to provide an outlet. But City’s pressing and incision means that every pass against them has to be utterly perfect, and if they aren’t teams lose the ball back to them immediately.

For City, Phil Foden was eating James Milner for lunch on the left side, regurgitating him, and then eating him again. But every time City got into promising positions, that lack of center forward that Pep Guardiola was clearly concerned about kpet rearing its ugly head. Crosses across the box would be missed by a couple of inches, or a wrong touch here or there, and you couldn’t help but feel like a seasoned striker would be there early instead of late.

Liverpool couldn’t help but be better in the second half, which for these teams only means getting more in the face of the opponent. The thing with these two teams is that the margin of error is minuscule. City’s level didn’t drop all that much, but just enough that suddenly Liverpool’s press was causing turnovers and recycling possession up the field instead of just being worked through.

Liverpool also boast maybe the one thing City doesn’t have, a forward who will create and score simply because he feels like it. His name is Mo Salah:

João Cancelo’s attempted “tackle” on Salah, which opened up Liverpool’s first goal, would best be described as “kindergarten,” but the run and pass are still world class.

If City don’t have the individual brilliance up front, they more and make up for it in team cohesion and understanding, as their two goals were Beethoven-level orchestrated:

Both easily could have won it late, with a Rodri block on Fabinho staring at an entirely open net looking more like a punt block (in terms of ground covered to get there) saving the game for City and Liverpool dodging some late chances themselves.

Liverpool could count themselves lucky as Milner should have been sent off before they went up 2-1 for a second yellow card, which would have been the perfect capper to his afternoon as a buffet.

We’ve had three games between City, Liverpool, and Chelsea, with City’s win at Chelsea the only decisive result in them. And that was by a single goal. The result leaves Chelsea up top, but if things are indeed this close between the three, City can rest on the knowledge that both will have to get something from trips to the Etihad later in the season.

What the game really was was an advertisement for the Premier League. While it’s size, influence, and money have basically swallowed the European game the past few years, this was the reason why. No other league is going to toss up games and teams of this quality on the reg like the Premier League can, which is why everyone watches.

Now if you’ll excuse me, I’m going to go smoke eight cigarettes at once and maybe throw up the lung I’m so heavily damaging.