Leopold Stokowski —A Leading Orchestra Conductor of the 20th Century 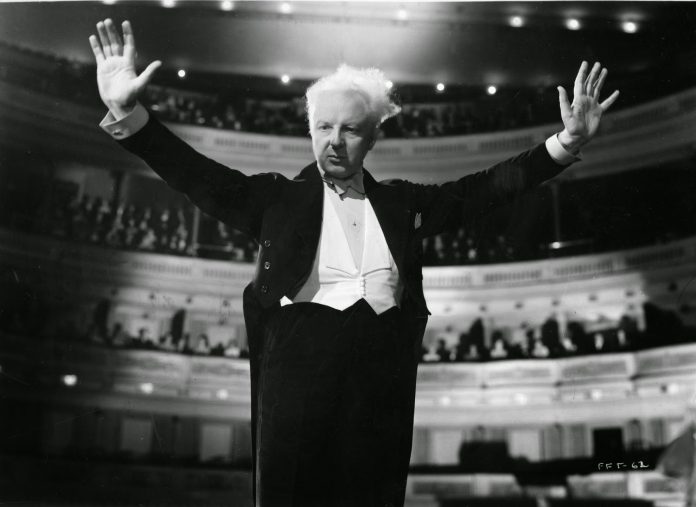 The son of an English born cabinet-maker of Polish heritage, Kopernik Joseph Boleslaw Stokowski and his Irish-born wife Annie-Marion (nee Moore), Stokowski was born in London, England on the 18th of April, 1882.  Stokowski was named after his Polish-born grandfather, Leopold, who died in the English County of Surrey on the 13th of January, 1879 at the age of 49. For professional and career reasons he urged his emphasis on only the Polish part of his background, once he became a resident of the United States. He studied at the Royal College of Music, where he first enrolled in 1896 at the age of thirteen, making him one of the youngest students to do so. In his later life in the United States, Stokowski would perform six of the nine symphonies composed by his fellow organ student Ralph Vaughan Williams. Stokowski sang in the choir of the St. MaryLeBone Parish Church, and later he became the assistant organist to Sir Walford Davies at the Temple Church. By the age of 16, Stokowski was elected to a membership in the Royal college of Organists. In 1900 he formed the Choir of St. Mary’s Church, Charing Crossroad, where he trained the choirboys and played the organ.  In 1902 he was appointed the organist and choir director of St. James’ Church, Piccadilly. He also attended the Queen’s College, Oxford, where he earned a Bachelor of Music Degree in 1903. In 1905 Stokowski began work in New York City as the organist and choir director of St. Bartholomew’s Church. He was very popular among the parishioners, who included members of the Vanderbilt family, but in the course of time, he resigned this position in order to pursue a career as an orchestra conductor. Stokowski moved to Paris for additional study in conducting. There he heard that the Cincinnati Symphony Orchestra would be needing a new conductor when it returned from a long sabbatical. In 1908 he began a campaign to win the position, writing letters to Mrs. Christian R. Holmes, the orchestra’s president, and travelling all the way to Cincinnati, Ohio for a personal interview. He was selected over the other applicants, and took up his conducting duties in late 1909.  That was also the year of his official conducting in Paris with the Colonne Orchestra on the 12th of May, 1909, when Stokowski accompanied his bride to be, the pianist Olga Samaroff, in Tchaikovsky’s Piano Concerto No. 1.  Stokowski’s conducting debut in London took place the following week on the 18h of May with the New Sympathy Orchestra at Queen’s Hall. His engagement as new permanent conductor in Cincinnati was a great success. He introduced the concept of “pop concerts” and starting with his first season, he began championing the work of living composers.  His concerts included performances of music by Richard Strauss, Sibelius, Rachmaninoff, Debussy, and many others. In early 1912 Stokowski became frustrated with the politics of the orchestra’s Board of Directors, and submitted his resignation, which was accepted on the 12th of April, 1912.

Two months later, Stokowski was appointed the Director of the Philadelphia Orchestra and made his conducting debut in Philadelphia on the 11th of October, 1912.  This position would bring him some of his greatest accomplishments and recognition. Before Stokowski moved into his conducting position in Philadelphia, however, he sailed back to England to conduct two concerts at the Queen’s Hall in London. On the 22nd of May, 1912, Stokowski conducted the London Symphony Orchestra in a concert which he was to repeat in it’s entirely 60 years later at the age of 90. On the 14th of June, 1912 he conducted an all-Wagner concert that featured the noted soprano, Lillian Nordica. While he was director of the Philadelphia Orchestra, he was largely responsible for convincing Mary Louise Curtis Bok to set up the Curtis Institute of Music (13th of October, 1924) in Philadelphia. He helped with recruiting faculty and hired many of their graduates.  Stokowski rapidly gained a reputation as a musical showman.

With his Philadelphia Orchestra contract having expired in 1940, Stokowski immediately formed the All—American Youth Orchestra, its players’ ages ranging from 18 to 25.  It toured South America in 1940, North America in 1941, and was met with rave reviews. Although Stokowski made a number of recordings with AAYO for Columbia, the technical standard was not as high as had been achieved with the Philadelphia Orchestra for RCA Victor. In any event, the AAYO was disbanded when America entered The Second World War, and plans for another extensive tour in 1942 were abandoned.

During this time, Stokowski also became chief conductor of the NBC Symphony Orchestra on a three-year contract (1941-1944). The NBC’s regular conductor, Arturo Toscanini, did not wish to undertake the 1941, 1942 NBC season, because of friction with NBC management.  Stokowski conducted a great deal of contemporary music with the NBC Symphony.

Stokowski began a new international career, which commenced in 1951 with a nationwide tour of England.  During the Festival of Britain celebrations he conducted The Royal Philharmonic Orchestra at the invitation of Sir Thomas Beecham. It was during this first visit that he made his debut recording with a British orchestra, the Philharmonic, of Rimsky—Korsakov’s Scheherazade. During that same summer he also toured and conducted in Germany, Holland, Switzerland, Austria, and Portugal, establishing a pattern of guest-conducting abroad during the summer months, while spending the winter seasons conducting in the USA. This scheme was to hold good for the next 20 years during which Stokowski conducted many of the world’ greatest orchestras, simultaneously making recordings with them for various labels. Thus he conducted and recorded with the main London orchestras as well as the Berlin Philharmonic, the Suisse Romande Orchestra, The French National Radio Orchestra, the Czech Philharmonic, the Hilversum (Netherlands Radio Philharmonic), et al.

Stokowski gave his last world premiere in 1973, when, at the age of 91, he conducted Havergal Brian’s 28th Symphony in a BBC Radio Broadcast with the New Philharmonic Orchestra. In August, 1973 he conducted the International Festival Youth Orchestra at Royal Albert Hall in London, performing Tchaikovsky’s Fifth Symphony.  Edward Greenfield of the Guardian wrote:  “Stokowski rallied them as though it was a vintage Philadelphia concert of the 1920s.”  Stokowski continued to make recordings, mainly with the National Philharmonic, even after he had retired from the concert platform.

Stokowski died of a heart attack in 1977 in Nether Wallop Hampshire, England at the age of 95.  He is interred at East Finchlely Cemetery in England.  Stokowski is now recognized as the Father of Modern Orchestral Standards. He possessed a truly magical gift of exacting burnished sound from both great and second rank ensembles. He also loved the process of recording and his gramophone career was a constant quest for better recorded sound.

His greatest pleasure was his outstanding conducting of nineteenth and twentieth century music. He was undoubtedly a musical perfectionist, but he was also not afraid to tinker with original works and to rearrange the orchestra to create new musical scores–a   progressive thinker to the end. Just one year before his death in 1977, Stokowski celebrated his 94th birthday by signing a deal with CBS records which would have taken him up until his 100th year, which he planned to celebrate by conducting the Royal Philharmonic Orchestra!

Stokowski was married three times. His first wife was American concert pianist, Olga Samaroff (born Lucy Hickenlooper) to whom he was married from 1911 until 1923.  They had one daughter, Sonya Maria Noel Stokowski. His second wife was Johnson & Johnson heiress Evangeline Love Brewster Johnson, married from 1926-1937.  They had two daughters—Gloria Luba Stokowski and Andrea Sadja Stokowski. Stokowski ‘s third wife from 1945 to 1955, was heiress and actress Gloria Vanderbilt. They had two sons, Leopold Stanislaus Stokowski and Christopher Stokowski.