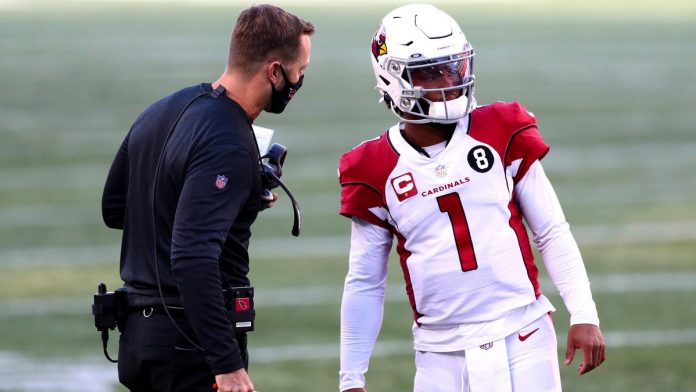 He made the entire Titans defense look like they were playing with a bottle of Miralax in their systems. He had five total touchdowns this past Sunday with over 300 yards of total offense.

Before our eyes, Murray could be transforming from an up-and-comer to a top-five quarterback candidate if he continues to ball out like this. And nobody will be happier to see this progression than his head coach, Kliff Kingsbury.

Everyone remembers the backlash that both Kingsbury and the organization took when they announced he was hired as the Cardinals’ head coach in January 2019. Many feel like he didn’t deserve the position in the first place, and frankly, his resume at the time did leave a lot to be desired. His greatest accomplishment was coaching Patrick Mahomes in college.

Everything that Kingsbury has done in his first two seasons has been under a microscope, even though the team improved by three wins from 2019 to 2020.

If Murray can take the next step in his maturation and become one of the premier playmakers in the league this season, don’t be surprised if Kingsbury gets a nice addition to his bank account. Murray becoming an MVP candidate and leading the Cardinals to at least 10 wins would all but ensure a contract extension for Kingsbury.

And what’s wild about the whole thing is that many of the plays that make Kyler Murray special have nothing to do with Kingsbury’s play-calling or offensive scheme.

I mean just look at this play:

You can’t coach that. That’s video game-level stuff. If Murray continues to keep this level of success throughout the season, we might need to have a transparent convo about Kingsbury’s coaching ability. If teams still can’t slow Murray down by Week 12 or so, then you’ll have to give Kingsbury credit for keeping the offense fresh.

Yet, from what we’ve seen so far this has been the Kyler Murray show. Time will tell us how much directing Kingsbury’s been doing behind the scenes.