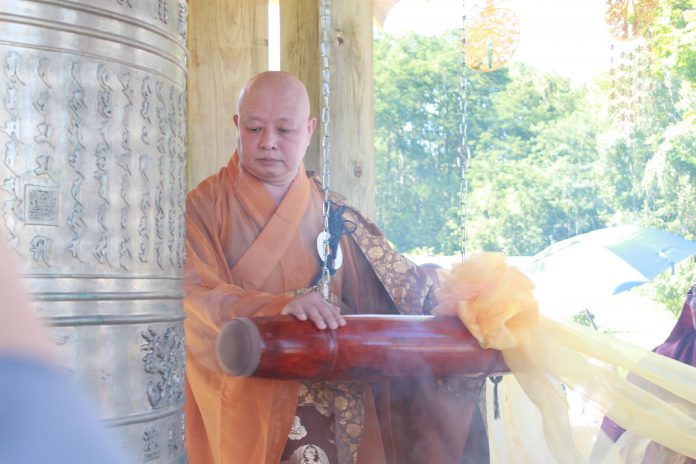 Umbrellas protected the heads and brows of the venerable Monks and guests on the hot summery afternoon of September 16, 2018. The sun poured out upon the attendees of the Dinh Thanh Temple located at 2408 Bleecker Street in Frankfort NY, there to celebrate the ancient tradition of Hong Chung, the Bell ringing ceremony.

Chairs were situated in front of the bell, housed in a traditional tile roofed wooden frame hut. The bell, crafted in Viet Nam weighs over one ton and is embossed with the intricate writing and symbols emblematic of this ancient religion.

Visitors and the faithful stood as the procession of Monks, Brothers and Nuns processed along the roadway to join those waiting for the ceremony to begin.

Drones, video cameras and digital cameras snapped and clicked as the great statue of Buddha and Quan Am were passed by the clergy. Buddhists from as far away as California, Washington and Canada came to celebrate, participate and record the event.

The procession ended at the chairs in wait. The congregation sat once the chanting and translations began. The bell was blessed with water from all sided by Thich Minh Thong with a sprig of green. Then the Master Monk of Vietnam, Thich Le Trang addressed the Bell with song.

Such a reverence and sweetness came from Monk as the congregation responded in song.

Then came the ringing of the great bell, intones long and short. Reverberating through the countryside, into the earth and up into the heavens.

Once the ceremony was ended, those present were all invited to ring the bell. A delicious vegetarian lunch was served outside under tents while the Monks dined inside the Temple itself where alms were given to the clergy who had traveled so far.

Below is the transcript of the presentation of the bell to the people of the land, written and delivered by Ton Tran:

“This wonderful sound brings me back to my true home.

“The Great Bell, also known as U Minh Bell or Hong Chung, is a spiritual Dharma treasure – the sacred Dharma instrument which is used to preserved Buddhist temples. It has a great influence on the spiritual life of humans, species, and realms. Its sound awakes all beings and resonates immeasurable worlds in ten directions.

“Those bells are used as a call to prayer as they can be heard at great distances. The sound of the bell represents the voice of the Buddha’s teachings and also reminds living beings to clarify their body, speech, and mind.

“May the sound of this bell penetrate deep into the cosmos

“Even in the darkest spots, living beings are able to hear it clearly

“So that all suffering in them ceases

“Understanding comes to their heart

“And they transcend the path of sorrow and death.

“The Buddha said the sounds of Hong Chung are the sound of awakening. It makes ones awakened his true self such as loving kindness, compassion, joy, generosity, non-self, and altruistic. These are good elements in us; nevertheless, we forget them. Therefore, the bell plays a role of awakening those elements in each of us.

“In our daily lives, we need some short of sounds to bring us back to the present moment. Many people have come to temple with anxiety, suffering, and despair, but as long as they hear the sound of Hong Chung, all suffering in them will be at ease.

“I send my heart along with the sound of the bell.

“May the hearers awaken from forgetfulness and transcend all anxiety and sorrow.

“It is important that the person who invites the bell to sound quiets his own being first. If his body, speech, and mind are quiet and in harmony when he invites the bell, the sound will be solid, beautiful, and joyful, and this will help the hearers to wake up to the present moment and overcome all anxiety and sorrow.”

“Hungry ghosts are pitiable creatures. They have huge, empty stomachs, but their mouths are too small and their necks too thin to take in food. Sometimes they breathe fire; sometimes what food they do eat turns to ash in their mouths. They are doomed to live with incessant craving.

“The Hungry Ghost Realm is one of the Six Realms of Samsara, into which beings are reborn. Understood as a psychological rather than a physical state, hungry ghosts might be thought of as people with addictions, compulsions, and obsessions.

“Greed and jealousy lead to a life as a hungry ghost.

“Hungry ghost offerings are held in order to give the poor creatures some physical relief. They are offered vegetarian and drink such as plain congee, sticky rice, some Vietnamese dishes, pops, snack, milk, juices, etc

“During the ceremony, monastics used their loving kindness and compassionate energy to invite hungry-ghosts to come over for those offerings. Also, they offered the Buddha’s teachings so that hungry-ghost can be rescued from dark places where consist of greed, hatred and ignorance.”