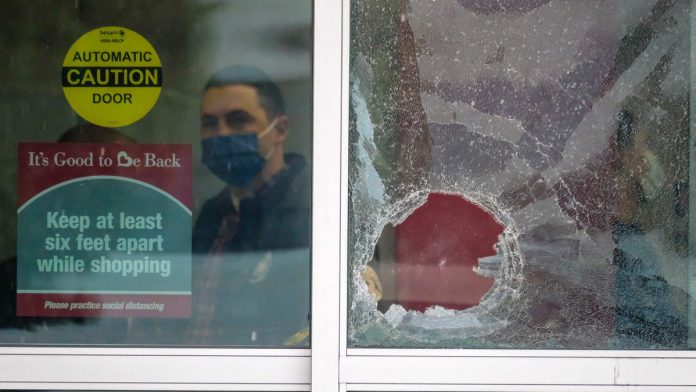 Los Angeles police shot and killed a 14-year-old girl inside a Burlington dressing room on Thursday during the attempted takedown of an assault suspect, authorities said.

The male suspect was also killed in the shooting.

The incident happened at about 11:45 a.m. on the second floor of the clothing store in North Hollywood. A third victim, a woman, was transported to a hospital with moderate-to-severe injuries, said Los Angeles Fire Department spokesman Nicholas Prange. It wasn’t immediately known if she’d been shot.

Authorities did not immediately say if the suspect had a gun. Police found a heavy metal cable lock near the suspect that they say may have been used in that assault. They said the woman who was injured was the victim of the suspect’s assault,and she had injuries to her head, face and arms.

FROM OUR EDITOR, TO YOUR INBOX:  Editor-in-chief Nicole Carroll takes you behind the scenes of the newsroom in this weekly newsletter

LAPD Assistant Chief Dominic Choi said at a press conference that the man’s motive was not known, and it was unclear whether he knew the woman he assaulted.

According to Los Angeles Police Department Capt. Stacy Spell, police responded to a report of someone being assaulted with a deadly weapon and of shots fired with people sheltering in place. Officers opened fire upon locating the suspect, police said.

“… One of the officer’s rounds penetrated a wall that was behind the suspect, beyond that wall was a dressing room. Officers search the dressing room and found a 14 year old female victim who was struck by gunfire,” the Los Angeles Police Department said in a tweet.

“You can’t see into the dressing rooms and it just looks like a straight wall of drywall,” Choi said, adding that it was unclear whether the girl was already inside the dressing room or went there to hide when the violence began.