Flu rips through University of Michigan, bringing CDC to campus 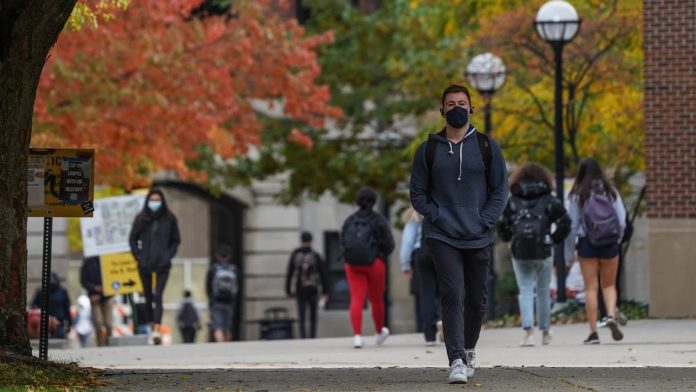 Masking and other precautions against the coronavirus had an added bonus last winter as flu cases dropped to historically low levels. But with schools and businesses reopened, travel resuming and far less masking, flu could make a comeback. (Sept. 30)

ANN ARBOR, Mich. – Influenza is sweeping the University of Michigan’s Ann Arbor campus, with 528 cases diagnosed at the University Health Service since Oct. 6.

The outbreak is so sudden and large – 313 cases were identified the week of Nov. 8 alone, and 37% of flu tests that week were positive – that it has drawn the attention of federal health leaders.

A team of investigators from the U.S. Centers for Disease Control and Prevention will be on campus this week trying to learn more about the spread of the virus and the effectiveness of this year’s flu vaccine.

Among those who’ve contracted flu at U-M this fall, 77% didn’t get a flu vaccine. The cases were identified as influenza A (H3N2), said Lindsey Mortenson, UHS medical director and acting executive director.

“While we often start to see some flu activity now, the size of this outbreak is unusual,” said Juan Luis Marquez, medical director at the Washtenaw County Health Department. “We’re grateful for the additional support of the CDC and our ongoing partnership with the university as we look more closely at the situation.”

The work will be led by the local health department, and will include the Michigan Department of Health and Human Services, the university and a team from the CDC.

When a public health authority requests assistance from the CDC for an urgent public health problem, such as disease outbreaks, unexplained illnesses and natural or human-caused disasters, an Epi-Aid team is tapped to provide short-term assistance.

Hear from the experts: Is it safe to get a flu shot and a COVID-19 vaccine at the same time?

In Ann Arbor, the team will evaluate flu vaccine uptake and vaccine effectiveness and risk factors for spread by collecting samples from patients at University Health Service, providing data analysis, and conducting questionnaires.

Health leaders are concerned about the timing of the increase in cases in Ann Arbor, as many students plan to travel soon for Thanksgiving break. They are calling on as many people as possible to get flu vaccines.

“We strongly recommend anyone not yet vaccinated against seasonal flu to do so,” Marquez said. “And anyone at higher risk of severe flu complications should talk to their doctor about prescription antiviral medications at the first sign of flu symptoms.”

Flu vaccine: More than 40% of Americans may not get a flu shot this year, which could spell trouble during COVID-19

Washtenaw County has a higher flu vaccination rate this year than the state overall. There, about 31% of residents have gotten flu vaccines this season, according to state data.

People who get flu vaccines help to protect those around them, including people who are more vulnerable to serious flu illness, like infants and young children, older people and those with certain chronic health conditions.

Last year, there was little to no flu activity. This year, health officials are concerned about the possibility of a “twindemic,” as both coronavirus and flu could surge.

Facebook
Twitter
Previous articleSteve Ballmer has done it this time, giving Clippers fans
Next articleWinter Fair to return to State Fairgrounds in 2022