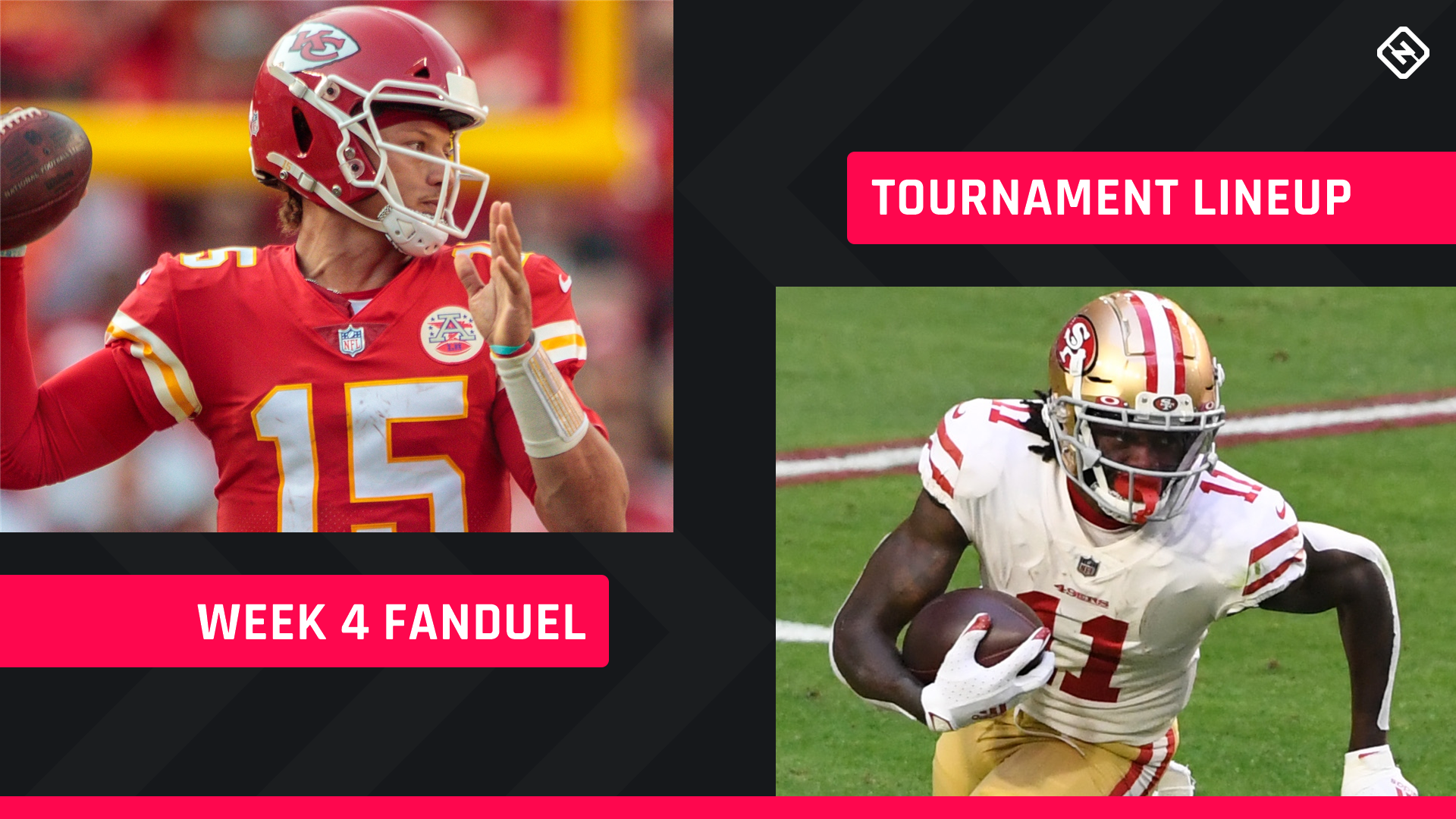 The Chiefs heading into Week 4 with a 1-2 record is among the biggest surprises of the young season so far. A trip to Philadelphia for a date with the Eagles looks like it could be the elixir they need to get back on the winning track — and what you need to boost your NFL DFS bankroll. We’re betting on that being the case and building this FanDuel tournament lineup around a Patrick Mahomes/Travis Kelce stack, plus a “pair” of Panthers.

Before we get into this week’s daily fantasy football picks, here are the basic rules for FanDuel contests. Scoring is pretty standard, with the only notable settings being four-point passing TDs and half-point PPR.

Sunday main slate, $60,000 budget, no more than four players from one team

QB Patrick Mahomes, Chiefs @ Eagles ($8,700). It’s difficult to envision the Chiefs dropping three straight. Mahomes has been guilty of some self-inflicted wounds, but he’s a good bet to clean those up and get the offense humming again in the City of Brotherly Love. Few QBs have as high of a ceiling in any given week.

RB Alvin Kamara, Saints vs. Giants ($9,000). Kamara is leading the Saints in touches by a wide margin, and even though he hasn’t been particularly efficient, there’s reason to expect that to turn around with friendlier matchups and game scripts.

RB Antonio Gibson, Washington @ Falcons ($7,100). Gibson demonstrated his home-run-hitting ability last week and has handled 37.5 percent of the Football Team’s touches this season. It’s easy to bet on Gibson at his price and in a matchup that opened with a respectable total of 48.5.

WR Marquise Brown, Ravens @ Broncos ($6,400). We’re can’t include Brown in this spot without mentioning the three big drops he committed last week. Perhaps he had some trouble getting juiced up for a trip to Detroit after two dramatic primetime games. No competitor likes leaving meat on the bone, so we’re betting he’ll be itching to bounce back this week. It’s also important to remember that was at least open for three big plays, so he’s still putting himself in position for big points.

WR Brandon Aiyuk, 49ers @ Seahaawks ($5,700). Aiyuk was finally taken out for a spin last week. The field may still tread gingerly, but he’s a big-play-waiting-to-happen and will be busy in the paint all season. There’s a very good chance his price is now the lowest we’re going to see for the rest of the season, so take advantage in this highly favorable matchup.

WR Kadarius Toney, Giants @ Saints ($4,900). Toney’s inclusion in our lineup is as much about his price tag as it is about his prospective opportunity. Sterling Shepard and Darius Slayton left Sunday’s contest with hamstring injuries, and Kenny Golladay has been nursing ailments since camp. Toney has been invisible for fantasy purposes, but he was on the field a lot more last week and may not have a choice but to be involved against the Saints.

TE Travis Kelce, Chiefs @ Eagles ($8,200). This could certainly be a Tyreek Hill game, but we’re rolling with Kelce in this instance. He’s tied for the team lead with 26 targets and has eclipsed 20 FanDuel points on two of three occasions so far this season.

FLEX (RB) Chuba Hubbard, Panthers @ Cowboys ($6,300). Welcome to Chalk City with this pick, but “chalk” isn’t a bad word. Christian McCaffrey (hamstring) will be sidelined multiple weeks. We saw this very coaching staff in Carolina put Mike Davis in a touch-heavy role in the wake of a CMC injury last week. Hubbard had 16 opportunities (11 carries, five targets) in relief last Thursday and is ticketed for a significant uptick in volume.

DEF Carolina Panthers @ Cowboys ($3,700). The Cowboys on the road isn’t the friendliest matchup, but the Panthers have a high-quality defense anchored by a ferocious front. Sometimes it pays to bet on talent, especially when the price is this nice.