Downtown Hospital Project to be Built Upon Lies

The tax-paying public was lied to by politicians who said a new hospital could only be built in downtown Utica. MVHS was also told the lie that they would not receive $300 million for a new hospital unless it was sited downtown.

If the lawmakers had intended the funding to be tied to the City of Utica, then they would have had to explicitly state this in the law. This is a longstanding rule (of how to read a law) of statutory construction known as “expressio unius est exclusio alterius,” expression of one thing is the exclusion of the other.

In a 2015 email from Steve DiMeo, Mohawk Valley EDGE President, DiMeo conveys that Hammes, the Company managing the construction of the project, believes that the hospital can probably be built on the St. Luke’s site and that factoring everything in, St. Luke’s might be cheaper.

It is important to note MVHS’s Board of Directors approved the St. Luke’s campus at the same time they voted to approve the downtown location. They said if things fall through with downtown for financial reasons, the new hospital would be built on the 64-acre St. Luke’s Campus.

A look at emails of local politicians at this time may reveal what the political climate was for board members of MVHS while they were voting on where to site a new hospital. Assemblyman Brindisi stated, “I feel like walking away from this whole thing and telling the community and hospital if you don’t want this thing downtown then good luck at St Luke’s and don’t come see me for one ounce of state support.”

Jim Brock, a co-founder of #NHD, said he was moved to start this group because 3 members of the MVHS board had contacted him separately on 3 different occasions with concern that they were being pressured into choosing the downtown site. Jim is a former foundation board member and Jim’s father before him, as well as his mother, were involved with Faxton’s Children’s Hospital and Faxton Hospital.

According to emails obtained by #NHD using a freedom of information request, Mohawk Valley EDGE President Steve DiMeo said that the reason they hired a certain planning-design firm was to, “guide siting decision in favor of downtown.”

In one of Assemblyman Brindisi’s emails he said of the downtown location: “I don’t want public opinion derailing this.” Both he and DiMeo expressed regret that the public was able to see their emails. The emails revealed their private agendas regarding the downtown location.
Community Foundation president, said they will guide the public, regarding the hospital location.

Through CF’s financial leverage, public opinion is continually pushed aside and voices ignored unless those voices agree with the insider’s agenda for the downtown site.
It is not and should not be the role of the Community Foundation to manipulate public opinion on the hospital’s location.

Many say the use of eminent domain for this situation is illegal because MVHS is a private company. There are at least 4 different property owners who are refusing to sell to MVHS.

Alicia Dicks is also business partners with Rob Esche who’s hockey team the Utica Comets and his restaurant, 72 Tavern, would both benefit by a parking garage in the downtown hospital plan. The parking garage, would be shared by the hospital and the Utica Aud and is currently slated to be paid for by County and City taxpayers. Cost estimates range from $25 million to $40 million over a period of years.

MVHS in their proposal to build a hospital in the downtown location has outlined a 24-acre parcel for the project. Although MVHS, to this day, does not own all of the property necessary for their plan, and in spite of an active legal challenge to this location, they have leveled two blocks worth of buildings in hopes of using the downtown site.

Unfortunately, the Utica City Planning Department and Planning Board have enabled this to happen by issuing demolition permits, regardless of the active lawsuit challenging the legitimacy of how MVHS conducted their site assessment. The lawsuit focuses on the process, known as SEQR, which is designed to evaluate the various types of impacts a project would pose to each potential site.

The lawsuit brought by #NHD and seven other plaintiffs, claims site selection for the hospital was not properly evaluated and was biased.

Benefits of the St. Luke’s campus were downplayed. St. Luke’s has a co-generation plant that provides the hospital with electricity at a low cost. There is already a helipad at St Luke’s. The total price tag of construction would potentially be less because St. Luke’s already has much greater accessibility to utilities, the property is already owned by MVHS and would require no demolition of buildings to clear the site.

According to their Oneida County bond offering business plan, MVHS has an estimated costs of $35 million on property acquisition and demolition alone. In other words, around $35 million dollars was spent unnecessarily on contractors and new real estate rather than on healthcare needs.

Additionally, in MVHS’s supposed site evaluation process, the St. Luke’s location was devalued by the claim that it is not in the population center of this region, when it legally and technically qualifies as within the population center, due to its immediate proximity to Utica, Whitestown, & New Hartford. Records show they looked at 12 sites within a 10 mile radius of Utica. Tom West, attorney for #NHD informed the judge in this case that the SEQR document from MVHS was “pathetic.”

The detriments of the downtown site were minimized. These points include the traffic congestion created by events at the Utica Auditorium and the Nexus center and the extreme flooding that takes place near Court street on the arterial. Two blocks of tax-paying properties are slated to be replaced with one large non-tax paying entity. By the County’s own estimates, in a 2017 email, the total loss of taxes by siting the hospital in the CoLa neighborhood would be $301,685 per year.

Additionally, the downtown site is well within the Federal 1/2 mile evacuation zone for railroad oil fires. These railroad tracks transport highly explosive fracked oil and this type of freight is only expected to increase. Train cars transporting this chemical mixture are being referred to as “bomb trains.” 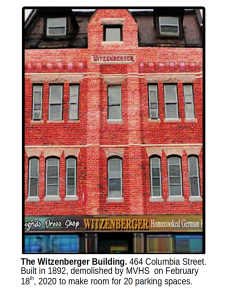 The manipulation of the hospital siting process has yielded a terrible situation. Unfortunately, MVHS has destroyed an historic neighborhood while the court case is still being decided. It is also unfortunate that members of #NHD could not use an injunction to prevent the demolition while the judge rendered his final decision in the case. They would have had to bond for the hospital’s potential losses due to delays which was cost prohibitive. However, MVHS is involved in a major gamble spending, by their estimates, some $52 million on a location that is under a serious legal challenge.

At this time MVHS is still seeks to bulldoze 20, or so, more buildings, mostly for parking.