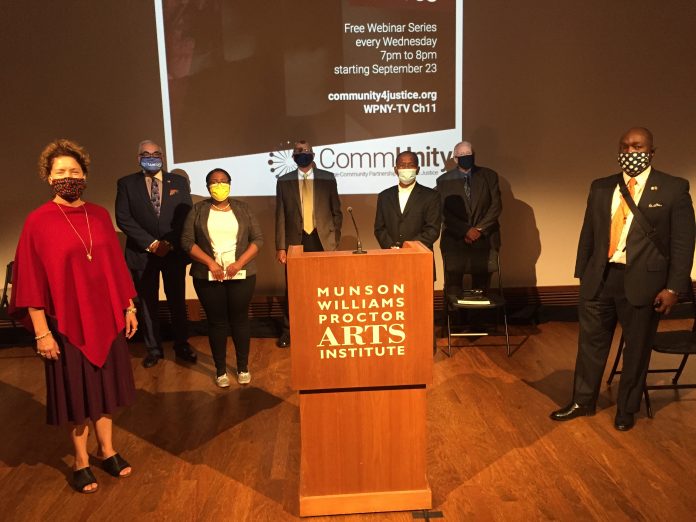 “Understanding the Use of Force”

Clinton, N.Y. – The College/Community Partnership for Racial Justice Reform is offering its fourth free online and broadcast webinar program this Wednesday, Oct. 14, at 7 p.m., on WPNY (channel 11 analog or channel 12 on Spectrum cable). The program, titled “Understanding the Use of Force,” can also be accessed online by registering at http://community2justice.org.

This week’s program will examine the legal standards for use of force by law enforcement in New York State, how the training of police incorporates “use of force”, and how it is interpreted by affected communities. Other topics discussed will be how “stop and question” and “stop and frisk” policies work, why de-escalation techniques should be incorporated into traffic stops, and alternative best practices to reduce the use of force by police.

Future free webinars in this series will be held on consecutive Wednesdays (except for the final offering in January) at 7 pm. All may be accessed via television and on the internet by registering at http://community2justice.org

October 21 – Justice in the Process
Operations of the courts, plea bargaining and the effects of race and poverty, restorative justice as an alternative

October 28 – Punishment and Corrections
Issues in county jails and probation, including education in the jails and re-entry best practices

November 4 – How Are We Handling Domestic Violence and Mental Health Interventions?
An examination of these both in the community and in the courts

January 27, 2021 – Next Steps toward Accountability and Reform